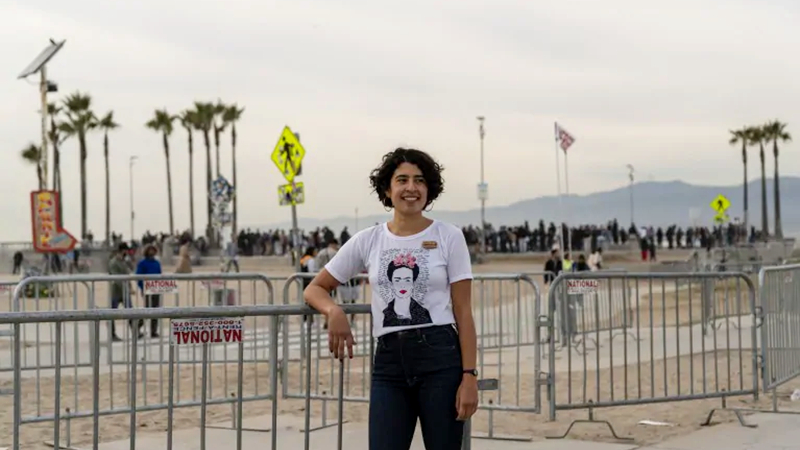 Frances Dávila, an immigration lawyer, pauses after a Bernie Sanders rally in Venice Beach in Los Angeles in December. She said she supports Sanders because of his promise to overhaul immigration policy. MUST CREDIT: Photo by Philip Cheung for The Washington Post

CONCORD, N.H. - The first two contests of the Democratic presidential race have demonstrated the power - and the limits - of the movement that Bernie Sanders has built since he began running for the White House nearly five years ago, obscuring the future of his ascendant candidacy.

A core base of young, liberal and working-class voters inspired by the senator from Vermont's calls for a political revolution powered the self-described democratic socialist to an effective tie atop the Iowa caucuses and an outright win in this week's New Hampshire primary.

Yet the early returns show that Sanders' loyal army represents a limited slice of the party, accounting for just over a quarter of the vote in each of the first two states. And one of the central premises of his campaign - that it is built to activate legions of new voters and spur record turnout among young people - has not been realized. 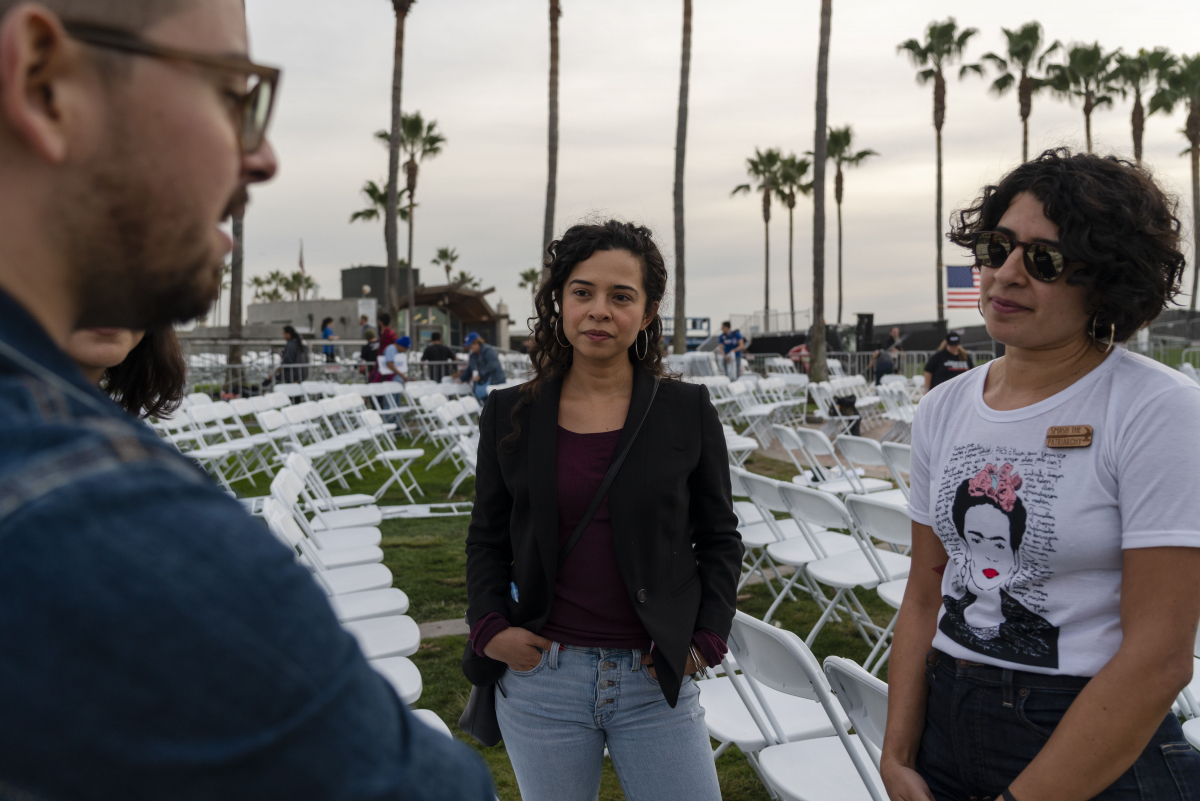 Perhaps more troubling for Sanders are the signals that he is having difficulties expanding his appeal beyond his staunchest backers. Half the voters in Tuesday's Democratic primary in New Hampshire said his positions were too liberal, according to exit polls. He has struggled among older voters, who make up a significant part of the Democratic electorate, and in suburban areas that could be key in upcoming races. Critics also say that hostility from his fervent followers makes them feel unwelcome.

Where in 2016 Sanders emerged as the single counterweight to the establishment favorite, Hillary Clinton, the 2020 primary electorate is more fractured, with many who might have backed him four years ago now choosing from among a range of choices - and Democratic voters of all ideologies putting a premium on a candidate's perceived ability to defeat President Donald Trump.

"If Sanders is counting on expanding the Democratic base to make the case for electability in the fall, that's just not happening so far," said David Wasserman, an analyst with the Cook Political Report. "If anything, the evidence shows the Democratic primary electorate has become more pragmatic than in 2016."

Tensions surrounding Sanders' coalition erupted into public view this week when the Culinary Union, the largest organized labor group in Nevada, said Sanders supporters "viciously attacked" the union for arguing that the senator's Medicare-for-all plan would undercut the health coverage it has negotiated for its members. Sanders cast doubt on whether his backers were responsible, making air quotes with his hands during a PBS interview this week as he said, "I don't know who these so-called supporters are."

"Sometimes people attack people in somebody else's name," he said.

At the same time, some of Sanders' highest-profile supporters are seeking to expand his movement, viewing his recent success as a ripe opportunity to attract new allies and cement his position atop the polls ahead of key contests in more-diverse states.

"If you look at the New Hampshire result, he won Latinos, he won voters under 45, he won white voters without college degrees," said Rep. Ro Khanna, D-Calif., a Sanders campaign co-chairman who said he is "gently having conversations" with fellow House members approaching him more frequently about whether to back Sanders. "I think he can replicate that."

Rep. Alexandria Ocasio-Cortez, D-N.Y., Sanders' most prominent endorser, signaled some flexibility on the senator's signature Medicare-for-all proposal, telling the HuffPost that he "worst-case scenario" would be compromising for an optional government insurance program. Whether it was an intentional entreaty to moderates or not, the concession did not sit well with some Sanders allies.

"You don't surrender in advance," said RoseAnn DeMoro, a close friend of Sanders who used to head an influential nurses union. "It was a misstep."

In a sign that Sanders was making progress building out his base, he won the endorsement Friday of New York Mayor Bill de Blasio, a onetime presidential candidate who supported Clinton in 2016.

Although the crowded Democratic presidential field has reduced Sanders' vote share, it also has played to his advantage. His strong showing in the first two voting contests is a testament to an unwavering base of voters who, according to dozens of interviews, have experienced hardship or feel marginalized by the government and the economy. That, many say, feeds an appetite for the sort of fierce political combat that Sanders represents.

Sanders' emergence has been fueled by fiery millennials like Frances Dávila of California, whose support for Sanders is motivated by the candidate's promise to overhaul an immigration system that displaced her family. "The next president needs to take very dramatic steps," said the 31-year-old immigration attorney.

Some 3,000 miles away in Massachusetts, Bill Giguere, who is indignant about the nation's health-care system and the power of wealthy political donors, also plans to vote for Sanders. "This country's not screwed up because Donald Trump was elected president. Donald Trump was elected president because this country was screwed up," said Giguere, 29, who works in software.

A big part of Sanders' appeal is his unyielding support for Medicare-for-all, an issue on which some of his fellow candidates have shifted.

Struggles with health-care costs were one of the most common topics of discussion at Iowa events where Sanders took questions from voters. He often asked his crowds to tell him how much they pay each month, as part of his pitch for an alternative system in which the government is the sole insurer.

Sometimes people blurted out large numbers, as if they were in the audience on "The Price is Right." Other times he called on them for more detailed answers.

"How much are people paying for premiums?" Sanders asked in Mason City, Iowa. A woman responded that she pays $700 a month. "A lot of money," he responded, after tallying her annual totals. "1200 a month, wow," Sanders replied to another person.

At times the discussions took on the feel of group therapy sessions, with emotional exchanges and pleas for Sanders to help deliver people from their dire circumstances.

"I know, you're waiting for the good news. Getting pretty depressing. And my wife always tells me I gotta hand out Prozac," Sanders said during a stop in Iowa.

The enthusiasm was evident in the days leading up to the primary. Sanders filled a college arena with more than 7,500 people who erupted in cheers when he took the stage. At a crowded town hall in Derry, where Richard Proulx, a 59-year-old FedEx package handler, said he was voting for Sanders because "he seems to be the one that relates closest to people."

"I think we are the strongest campaign to defeat Trump," Sanders told the crowd in Derry, New Hampshire, a line he uses often. To beat him, Sanders said, "we are going to have to have in November the largest voter turnout in the history of this country." He said "old-fashioned status quo politics" would not generate that level of excitement.

But the results in Iowa and New Hampshire also revealed potential speed bumps on the road to revolution.

In New Hampshire, where Sanders' vote tally in 2016 topped 60 percent as he walloped Clinton, on Tuesday his 25.6 percent finish was enough to just edge out former South Bend, Indiana, mayor Pete Buttigieg.

The share of Democratic voters ages 18 to 29 dropped from 2016. And Wasserman observed that turnout increased by higher percentages in areas where Buttigieg and third-place finisher Sen. Amy Klobuchar, D-Minn., won than they did in Sanders' towns. This suggested the overall increase in turnout was likely attributable to GOP-leaning independents who opted to vote in the Democratic primary, rather than Sanders bringing out new voters.

In Iowa, turnout was lower than many Democrats had hoped, worrying some in the party about enthusiasm for the fall election. Sanders and Buttigieg finished neck-and-neck there.

Sanders allies have been looking for expansion opportunities beyond the early states. On Capitol Hill, Khanna has served as a point person for appealing to liberal members for support and as an unofficial emissary to more traditional Democrats. "I start with Bernie Sanders is an FDR Democrat," he said, explaining his pitch.

Sanders hosted a series of private dinners at a Chinese restaurant on Capitol Hill last year with members of Congress, campaign officials said, events designed to introduce them to his campaign.

Even as some allies have sought to broaden his appeal, Sanders has drawn polarizing supporters who have complicated those efforts. There is podcast host Joe Rogan, who has drawn criticism over his comments about gender, race and sexuality. There is Rep. Rashida Tlaib, D-Mich., who booed Clinton at a Sanders event before later regretting her choice. And there is the army of supporters who often go aggressively after Sanders critics online.

These disputes have caused some whiplash in the Democratic Party, because Sanders has also shown signs of improvement in his outreach to women and nonwhite voters, who were liabilities for him in 2016. In the Latino community, where the vote skews young, he is especially strong, which has encouraged aides about his chances in Nevada and California.

A key factor is Ocasio-Cortez. One of the most electric young stars on the left, she has given the Sanders campaign a more youthful and diverse feel.

Dávila, the California supporter, attended a rally in December on Venice Beach, California, where Ocasio-Cortez and Sanders spoke and the estimated attendance was more than 14,000. That event nudged her toward Sanders for a second time.

"In 2016, a lot of my friends who were going out and voting for him were like young, white liberals," said Dávila. "The fact that there were so many black and brown people at the rally was huge."

Like Davila, who likes Sanders' vows for an "aggressive approach from day one" of his presidency, Giguere, who made the short trip from North Andover, Massachusetts, to attend the Sanders town hall here, offered a similar explanation for why he supports the senator.

Giguere praised "his ability to identify the problems that pertain to most people in this country - health care, getting big money out of politics." He added, "I like his approach to tackling those problems - not just by legislating through them but by being the organizer in chief."