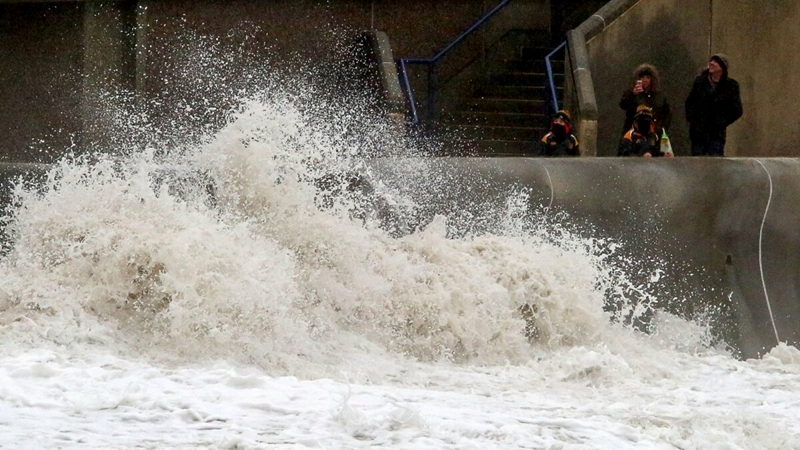 Dennis has become one of the most powerful nontropical cyclones on record in the North Atlantic, packing hurricane-force winds and turning a vast swath of seas into a churning, ship-sinking cauldron with individual waves topping 100 feet. The storm slammed into Britain just one week after deadly Storm Ciara hit with high winds and heavy precipitation, prompting flooding fears.

The Associated Press reported that two people had died in separate incidents Saturday from rough seas off the coast of southeast England. Military personnel were called in to help build flood barriers as several inches of rain fell on waterlogged soil and winds caused significant disruptions in air and rail service.

According to a list maintained by Christopher Burt, a weather historian at Weather Underground, Dennis ranks as the second-strongest storm on record for this region.

Peak winds in Britain have hit 87 mph. More rain and wind is forecast in the United Kingdom through Monday, though the focus of the impacts will shift to northern areas, closer to the storm center. The U.K. Met Office gave the storm its name as part of its program for warning of dangerous winter storms.

Dennis is the result of the atmospheric version of a corporate merger as two bomb cyclones spinning in proximity merged into one behemoth on Saturday, reaching historic proportions.

It occupies an extraordinary stretch of real estate, extending all the way from south of Iceland, southeastward into Britain, and southwest across the Atlantic and into the Gulf of Mexico.

A nearly 5,000-mile-long cold front connects Storm Dennis to a plume of tropical moisture, known as an atmospheric river.

As of Saturday afternoon, Dennis contained a minimum central air pressure of 920 millibars after putting on an extraordinary display of rapid intensification, known as bombogenesis. This pressure reading was roughly equivalent to what would be observed in a Category 4 or 5 hurricane.

In general, the lower the air pressure, the stronger the storm. The air pressure in the center of Dennis plunged by 56 millibars in 24 hours between 4 p.m. Eastern time Friday and the same time Saturday, according to the National Weather Service's Ocean Prediction Center. This was more than twice the intensification rate required to be considered a bomb cyclone.

Northwest-facing beaches in France, Britain, Ireland and Scandinavia are seeing extraordinarily high surf from the combination of Dennis and another hurricane-force low pressure area that is in the process of merging with Dennis to create one massive area of spin in the North Atlantic. That previous storm, which also was a bomb cyclone based on its intensification rate, slammed Iceland with blizzard conditions and winds up to 108 mph Thursday night and Friday.

Timothy Holley, a senior marine forecaster at the center in Maryland, said that there haven't been wave height measurements from ships. "We would hope we wouldn't have any ships in the area to get any in situ measurements," he said.

In addition, buoys haven't been in the strongest area of the storm either. Instead, meteorologists are relying on satellite sensors and computer models to determine the wave heights, which means they are estimates.

Significant wave height is defined as the average of the highest one-third of waves in a particular period, and tends to run about half the height of single waves. Even taller, so-called rogue waves, have been known to take place in roiling seas caused by storms such as Dennis.

Even before Dennis formed, a buoy northwest of Ireland recorded a significant wave height of 41.3 feet Friday morning, which means individual waves were about twice as high, or nearly 80 feet, in that location, due to the previous bomb cyclone that hit.

In Iceland, whiteout conditions were observed along with wind gusts above 100 mph as the preceding bomb cyclone passed perilously close to the island nation. The Icelandic Meteorological Office issued rare red warnings for parts of the country into early Friday, with orange warnings continuing into Friday night due to the strong winds and heavy precipitation, and travel was halted virtually everywhere.

The National Weather Service's Ocean Prediction Center reported Friday that a satellite passing over that storm, which has since merged with Dennis, detected a significant wave height of 64 feet west of Ireland. This means individual waves in that area were potentially as high as 128 feet.

Energized by an unusually powerful jet stream - a highway of air at about 30,000 feet that is powered by the thermal contrasts between air masses - these weather systems have been developing rapidly and reaching extraordinary intensities in a region already known for strong winter storms. Winds in the core of the jet stream reached 240 mph late Friday, which led transatlantic flights to see ground speeds exceeding 800 mph, though the record for fastest transatlantic flight, first broken Sunday, held.

The strongest North Atlantic storm on record was the Braer Storm in 1993, which had a minimum central pressure of 913 millibars. Illustrating the dangers such storms pose to ships, this storm was named after an oil tanker that broke apart during the storms in the Shetland Islands, resulting in a large and damaging oil spill.

Friday marked the date of the climatological peak for bomb cyclones in the North Atlantic, given the typical intensity of the jet stream and intense air mass differences that tend to move over moisture-rich waters. What's been especially noteworthy about the winter's weather, however, is the frequency and intensity of the storms spawned here.

Very few of these storms typically see their minimum air pressure drop to 930 millibars or lower; yet this has now happened three times in the past 10 days, with Dennis ranking as the most intense of the three storms. (The low-pressure area that helped propel Storm Ciara into Europe last weekend accomplished this feat as well.)

The strong near-zonal - or straight west-to-east - jet stream is characteristic of periods when a weather pattern above the North Atlantic, known as the Arctic oscillation (AO), is in a what is known as a positive state, with low pressure predominating near Greenland and a ridge of high pressure to its south.

The AO is one of the main reasons winter has been absent in much of the eastern United States and parts of Europe, and it's helping to turn the North Atlantic into a virtual bomb cyclone express lane.