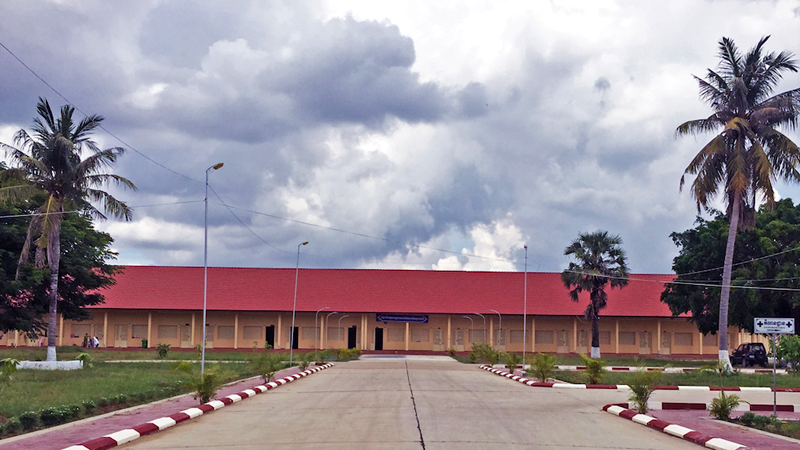 The Kandal Stueng health center, about 15 miles outside the capital, Phnom Penh, is Cambodia's first mental rehabilitation facility. It opened last year and houses 48 patients. MUST CREDIT: Photo for The Washington Post by Leonie Kijewski

SIEM REAP, Cambodia - The slender 15-year-old shifts restlessly from one knee to the other on the wooden floor of his family's houseboat. He has just finished a dinner of rice and fish, but he can't play with the other children: His ankle is shackled, and he can move only within a three-foot radius.

"Our boy has a mental problem," said his mother, Seam, a shy woman in her early 40s with long hair and a broad smile. "We put him in chains because he likes to smell gasoline, and when he does that too much, he damages his health. So we need to keep him from getting out."

With seven other children to manage and no mental health clinic in their area, Seam, who asked not to be identified by her full name or her son's for fear of retribution from the community, said she had no other choice.

Her son's fate is not an isolated case. The few mental health facilities in Cambodia, a nation plagued by poverty, are poorly funded and ill-equipped, leaving patients languishing at home without adequate treatment.

People with mental disabilities are often chained up by relatives because their families don't have the resources to care for them, said Chhim Sotheara, director of the Transcultural Psychosocial Organization Cambodia, adding that a lack of treatment options and reliance on traditional healing methods compound the problem. 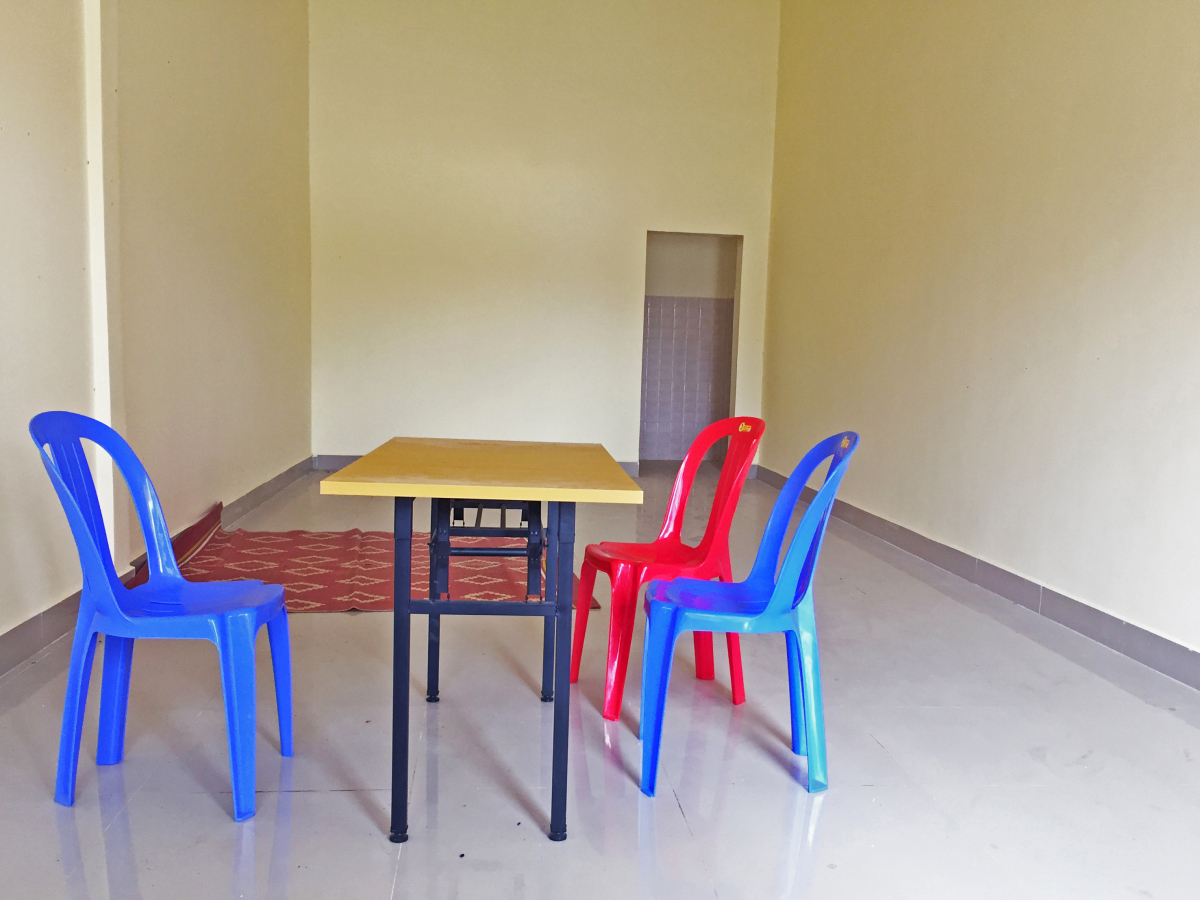 His organization is working with dozens of families to treat mental health problems and has unchained more than 100 individuals over recent years, he said. His team recently received eight cases in one week.

Last year, the government opened the Kandal Stueng health center, the only facility in Cambodia that provides housing, treatment and rehabilitation for people with mental illnesses. But it lacks resources, and patients' freedom is severely restricted.

"We have the rule that the people who have a mental problem cannot go out from this center by themselves," said Nguon Kosal, the center's director. "We do that because we want to protect them."

Designed for 200 patients, the center, located about 15 miles from the capital, Phnom Penh, is housing 20 men and 28 women during an indefinite trial phase; most were brought in from the Prey Speu detention center, where they had been held untilJuly.

Five patients are locked in each 200-square-foot room. The windows are barred, and there are no mattresses on the iron bed frames. Thick padlocks hang in front of beige doors.

The Washington Post interviewed some of the patients, who spoke on the condition of anonymity because the center's officials were concerned about possiblereprisals and patients' privacy.

One resident, a 32-year-old man who said he was from the coastal city of Sihanoukville, said he had tried to escape dozens of times since he came to the facility several months ago, an account confirmed by Kosal and Reach Seila, the center's deputy director.

"I want to leave because they try to strangle me," the man said, placing his hands on his neck. "They hit me and they grab my legs," he added, without naming his purported tormentors. The Post could not confirm this account, but Seila said it was possible "other patients teased him."

The 32-year-old said there was nothing to do but sit on the bed. He wants to work and do something with his life, he said. Maybe study at a pagoda or go to Thailand.

His roommate, a shy man also in his early 30s, expressed similar sentiments. After two years at Prey Speu, which houses homeless people swept up in authorities' urban "beautification" initiatives,he said he could not bear life at the new center.

Kosal said patients would be allowed to leave only when a doctor had certified they were ready.

Mental health issues are prevalent in this Southeast Asian nation, where years of war and conflict didn't fully come to an end until the 1990s. Under the autocratic Khmer Rouge regime, from 1975 to 1979, millions worked in slavery-like conditions, and an estimated 1.7 million people were killed or perished from malnutrition, starvation and disease.

Fighting in that era and beyond left the nation further traumatized and with a legacy of unaddressed mental health issues, Sotheara said.

"With the survivors of the Khmer Rouge, they don't express their problems straightaway. But when we start digging into the problems, we can see a lot of them have depression and trauma," he said.

Some studies have found that trauma can be passed on through generations and that hardship and violence can potentially alter the expression of a person's genes. Although little analysis has been conducted on the topic in Cambodia, Rachel Yehuda, director of the Traumatic Stress Studies Division at the Icahn School of Medicine at Mount Sinai in New York, and her colleagues have found that stress experienced by Holocaust survivors before the birth of their children had an impact on their children's genes, and that trauma, in short, could lead to detrimental alterations.

Studies on Cambodia have shown trauma can be perpetuated by a lack of educational measures to address past horrors. For some people with anxiety disorders caused by the war, Sotheara said, poverty has exacerbated the issue.

Sotheara said younger people often come to him with anxiety about their education, job prospects and family issues, while older people feel more isolated. Many Cambodians emigrate because of a lack of job opportunities at home, interrupting traditional caretaking patterns in which children are expected to look after aging parents.

Kosal said anxiety disorders and schizophrenia are common among patients at the new center.

Women living there seem more at ease than their male counterparts, he said, and their doors are kept unlocked more often because they are less likely to try to escape.

Over bowls of rice at the center's canteen,several women - all with short hair after their heads were shaved at Prey Speu - told The Post they were happy at the center.

"If they provide sweets after lunch," one of them said with a big smile, referring to mango and other fruits, "I don't want to leave."

Chak Sopheap, executive director of the Cambodian Center for Human Rights, said while it could be legal in some instances to detain a person suffering from a mental illness, it should not be the default solution.

Patients should be detained inside a facility only when doing so is the least restrictive treatment option for their health needs, she said.

Officials from the Health Ministry did not respond to requests for comment.

Yim Sobotra, director of the Department of Mental Health and Substance Abuse at the state-run Khmer-Soviet Friendship Hospital in Phnom Penh - whose clinic with 16 doctors receives 600 to 800 patients daily but does not provide residential care - said stigmatization and discrimination often keep patients from seeking early treatment.

"People think it's not acceptable to have a mental disorder. They call us the 'crazy hospital.' So they take time to come here, and only when their moderate anxiety becomes severe, they come," he said.

Back at the houseboat near Siem Reap, Seam is all too familiar with the difficulties of caring for someone with a mental disability.

"It's hard to pay for the medicine, so I have no choice but to borrow money," she said.

Sotheara said his organization has seen cases nationwide of people selling their property or going into debt to pay for medicine.

Care at the Kandal Stueng center is theoretically free, but a lack of resources means health workers cannot provide all the services they would like. Individual therapeutic consultations take place only once a week, said Seila, the deputy director. And with barely any money for teachers, classes in sewing and other skills are irregular.

To make ends meet, Kosal said, the staff introduced a new rule. When families come to visit relatives at the center, "they need to buy things for all the other patients as well," he said.