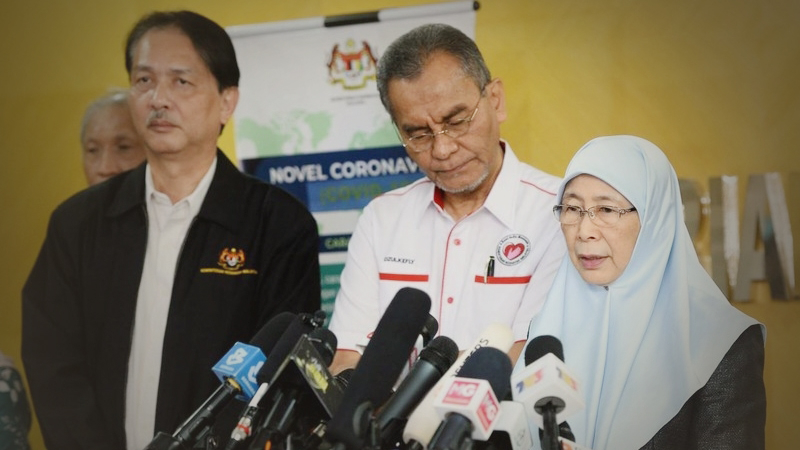 PUTRAJAYA: The remaining passengers on the MS Westerdam cruise ship in Cambodia will not be allowed to enter Malaysia after an 83-year-old American woman on board the ship tested positive for Covid-19 (novel coronavirus) after flying into Malaysia.

“MAS planned four chartered flights to bring passengers to land in KLIA from Friday to Sunday but since a case was detected, MAS has decided to cancel the other chartered flights, ” she said at a press conference to provide updates on Covid-19 here yesterday.

The Health Ministry said it did not have the number of those who were left behind.

Dr Wan Azizah said the government had also decided not to allow any cruise ship that had left China or transited there to enter Malaysia.

She said all the first batch of 145 passengers of the cruise ship were screened when they landed in KLIA on Friday and the 83-year-old woman and her husband, both US citizens, were detected to have symptoms while going through the thermal scanner.

They were sent to Hospital Sungai Buloh for further examination and the following day, the woman tested positive.

She had a cough but no fever or breathlessness while X-ray results did not show any inflammation.

Dr Wan Azizah said based on the results, MAS cancelled the rest of the chartered flights since the other passengers were considered in “close contact” with the woman.

She said the woman was tested twice and both results were positive, and Health director-general Datuk Dr Noor Hisham Abdullah had shown the test results to his Cambodian counterpart.

“The wife tested positive twice. The first one, they said that maybe we were not following protocol.

“But Dr Noor Hisham said we showed everything to them and they agreed that our protocol was actually world class. So, whatever that we did was right.

“So it was not a false positive. It was a positive, ” she added.

The Cambodian Health Ministry had asked its Malaysian counterpart to review the test results after the woman tested positive for the virus, Reuters reported.

According to the Health Ministry, tests on the woman were done 12 hours apart on the same sample.

The tests carried out were nasopharyngeal swab and oropharangeal swab.

Among the 143 others who landed, screened and did not have symptoms, 137 had continued with their journey while six more were waiting for their connecting flights.

The remaining six passengers, Dutch and US citizens, currently waiting for their flights will have to go through the Covid-19 test.

“If they are found negative, they will be allowed to continue with their journey.

“But if they test positive, they will be brought to the hospital for observation, ” said Dr Wan Azizah.

The ship docked in Hong Kong for a day before going on a 14-day East Asia cruise on Feb 1.

permission at Sihanoukville on Feb 13.