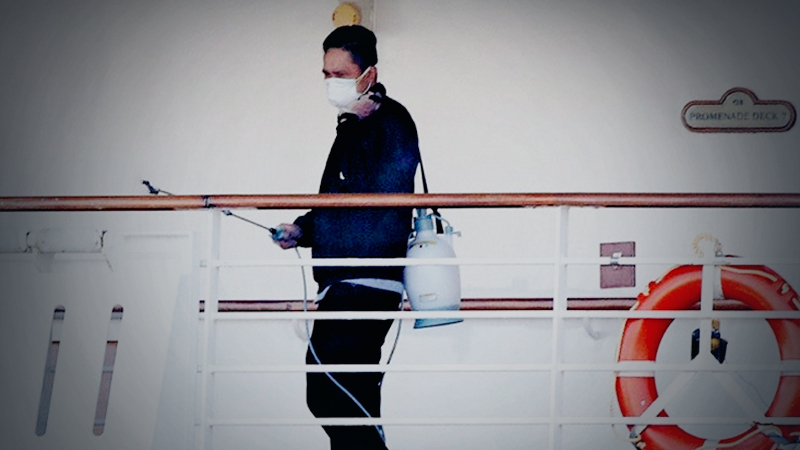 BEIJING - Fourteen Americans evacuated from the coronavirus-stricken Diamond Princess cruise ship in Japan tested positive for the illness but were allowed to board two chartered planes bound for quarantine on U.S. military bases.

Their return almost doubles the number of confirmed cases, which previously stood at 15, of the new coronavirus in the United States.

The 14 passengers tested positive for the virus after disembarking the cruise liner, which is moored off the Japanese port of Yokohama, but before boarding the planes. They were all asymptomatic so health authorities deemed them "fit to fly," the State Department and the Department of Health and Human Services said in a statement Monday.

They were cordoned off from the other passengers during the flight, it said.

"These individuals were moved in the most expeditious and safe manner to a specialized containment area on the evacuation aircraft to isolate them in accordance with standard protocols," the departments said.

A total of 328 Americans were evacuated on the two flights; all are due to go into quarantine for 14 days, the maximum incubation period for the virus, at Travis Air Force Base in Fairfield, California, or Lackland Air Force Base in San Antonio.

Flight data showed that one flight had landed at Travis late Sunday night local time, and the other in San Antonio early Monday.

Another 44 Americans from the cruise ship had previously tested positive for coronavirus and had been taken to hospitals in Japan to recover.

Japan's Health Ministry on Monday reported 99 new cases of coronavirus among the passengers and crew of the Diamond Princess, increasing the total number of infections from the ship to 454. Of those, 18 are in serious condition, the Yomiuri newspaper reported.

Yosuke Kita, a senior official in the Japanese Health Ministry, said the government will have finished testing everyone on board the Diamond Princess by the end of the day on Monday.

One of the new cases was a Russian woman, who would be taken to hospital for treatment, the Russian Embassy in Tokyo said on Twitter, and two were Australians, according to the Australian Broadcasting Corporation.

The Australian government said it would evacuate more than 200 of its citizens stranded onboard the Diamond Princess on a charter flight that will depart from Japan on Wednesday. They will all have to spend two weeks in quarantine in the northern city of Darwin.

"I understand that those who were on board will feel very frustrated about this," Prime Minister Scott Morrison said on Monday. "But our first responsibility is that we have to protect the health and safety of Australians in Australia today."

The Australian plane would also carry out the 11 New Zealanders stranded on the cruise ship, said New Zealand Prime Minister Jacinda Ardern, and they would have to go into quarantine once home.

With Monday's new cases, a total of 26 Australians and two New Zealanders have been confirmed as having the virus.

The evacuations were underway amid a continuing scramble to contain the virus, especially in China, where the outbreak began in Wuhan, the capital of Hubei province, in December.

The number of confirmed infections in China now exceeds 70,000, with the death toll rising to 1,770, the overwhelming majority of both occurring in Hubei province. But China's National Health Commission has stressed that the number of new cases outside Hubei province has been declining, as authorities impose draconian restrictions on people's movements in an attempt to stop transmission.

Another cruise liner, the Westerdam, owned by Holland America Line, is at the center of a coronavirus-related investigation.

Hundreds of passengers have flown home, mostly through Thailand or Malaysia, after the ship docked in the Cambodian port of Sihanoukville and Cambodian health authorities deemed it coronavirus-free.

But an American woman has since tested positive for the virus, setting off a scramble to trace the infection.

Holland America Line said Monday that it was working closely with government and health officials in Malaysia and Cambodia, as well as experts from the U.S. Centers for Disease Control and Prevention and the World Health Organization, to try to trace people who may have been exposed to the virus.

An 83-year-old American woman who disembarked from the ship at Sihanoukville on Friday took a charter flight to Kuala Lumpur, the capital of Malaysia, along with 145 other passengers. They had all passed health checks by Cambodian authorities and cleared to disembark and travel onward.

When the woman arrived in Kuala Lumpur, she reported not feeling well and tested positive for the virus. Malaysian authorities say she is in stable condition.

Her traveling companion tested negative and none of the other passengers or crew members reported symptoms, the company said in the statement.

The Westerdam on Monday remained in Sihanoukville, where it had docked last week after spending two weeks at sea. Authorities in Japan, Taiwan, Guam, the Philippines and Thailand had turned it away after seeing what had happened with the Diamond Princess, where the number of infections had grown rapidly even while the vessel and its passengers were supposed to be quarantined.

Cambodia's prime minister, Hun Sen, who has vowed not to do anything to anger China and even wanted to visit Wuhan, said his country would take the ship, which had been deemed virus-free.

The U.S. ambassador to Cambodia, W. Patrick Murphy, visited the cruise ship while it was in port and posted photos on Twitter of him and his family with American passengers.

President Donald Trump tweeted on Saturday: "Thank you to the beautiful country of Cambodia for accepting the @CarnivalCruise ship Westerdam into your port. The United States will remember your courtesy!"

Amid concerns over widening clusters of outbreaks outside of China and a possible new stage in transmission patterns, Japan and South Korea changed their approaches to confronting the virus on Monday.

Japan reported a sharp rise in the number of people with coronavirus over the weekend, with 65 people now confirmed to have the virus, up from 33 on Thursday. The fact that many of the latest cases cannot be traced directly to China forced Health Minister Katsunobu Kato to admit that the virus has entered a "new phase" of local transmission.

The country had initially employed a "quarantine-based" approach, for instance restricting entry to people who had recently been in Wuhan, said Shigeru Omi, chief director with the Japan Community Health Care Organization, an organization that runs medical centers across Japan.

But now the country is shifting to an approach focused on community-based control and treatment, he said.

One aspect of this was a "highly sensitive surveillance system ... to allow prompt detection of cases." Health Minister Kato said Japan can now administer more than 3,000 tests a day.

Omi said that the "goal of this strategy is to slow the speed of transmission and reduce mortality" - a de facto acknowledgment that it has now become impossible to prevent the virus from spreading further in Japan.

"My gut feeling is we can avoid a situation such as Wuhan," he said. "Some transmission is inevitable, but the case fatality rate will not be as high as Wuhan and Hubei."

As the country was bracing for more infections, Japan's Imperial Household Agency canceled a birthday event for Emperor Naruhito at the Imperial Palace scheduled for Sunday. The organizers of the Tokyo Marathon said they would only allow elite racers to compete at the event on March 1, preventing tens of thousands of people from being able to participate. The event doubles as a qualifier for the 2020 Tokyo Olympics.

Apart from Japan, South Korea similarly stepped up its efforts to confront the outbreak on Monday. The country will start testing individuals for the coronavirus if they have been identified by doctors as having pneumonia-like symptoms linked to the virus, even if they have not recently traveled abroad.

The announcement came as South Korean health officials were still attempting to trace the origins of a new infection, first reported on Sunday.

In Beijing, China's ruling Communist Party signaled that it would almost certainly postpone the annual meeting of its legislature, the National People's Congress and the other national committee of the Chinese People's Political Consultative Conference. Together, these meetings are known as the "Two Sessions" and have opened on March 5 every year since 1995, except for 1997 when the meetings convened on March 1.

Officials from the NPC standing committee will meet Feb. 24 to discuss postponing the meetings, the official Xinhua News Agency said on Monday.

At the meetings, Chinese leader Xi Jinping and Premier Li Keqiang take to the stage in the Great Hall of the People on the western edge of Tiananmen Square and lay out their vision for the year ahead. Some 3,000 delegates from around the country attend.

The move to delay it "underscores the gravity of the coronavirus epidemic," according to the analysts at the NPC Observer blog. "Officially, the Council is reported to have been mainly concerned with pulling NPC delegates (over a third of whom are local officials) away from their epidemic control efforts," the analysts said in a blog post, linking to a state media article.

Other analysts point out that it would be bad optics for the party to hold a huge meeting at a time when all public gatherings are banned, and even worse to show thousands of cadres in masks. The party's leaders are already being criticized for their slow response to the outbreak and apparent efforts to silence those who warned about it.

Also on Feb. 24, the NPC standing committee will vote on restricting the sale of, and banning the consumption of, wild animals. The coronavirus outbreak began in a food market in Wuhan where exotic animals, including snakes and hedgehogs, were on sale. The virus is thought to have mutated and jumped from the animals to humans.

The semiautonomous Chinese territory of Macao is now set to reopen its casinos on Thursday, capping a 15-day closure that has been aimed at stemming the coronavirus outbreak from spreading further in the city of 670,000 - even as the government continues to urge people not to congregate. Macao earns billions in tax revenue from its casinos, and tourism more broadly accounts for 80 per cent of its economic output.

The move was an unexpected one, however, as most analysts believed the shutdown in the world's largest gambling hub would be extended as cases continue to spike in mainland China. Analysts said the decision could have been prompted by Chinese leader Xi's desire for the coronavirus not to hinder China's overall progress and its economy. He has warned against "overreactions" to the outbreak.