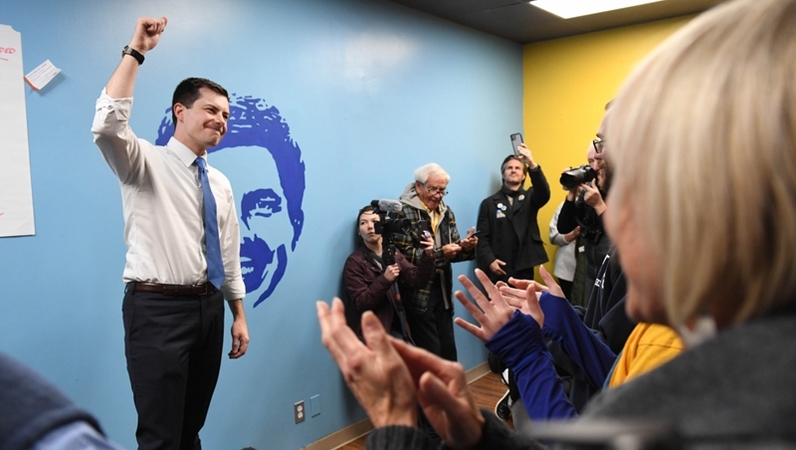 LAS VEGAS - Presidential candidate Pete Buttigieg fired back against homophobic attacks from conservative radio host Rush Limbaugh in a CNN town hall Tuesday night, offering some of his most fiery responses yet to Limbaugh's assertion that President Trump told him not to apologize for saying that Americans wouldn't elect "a gay guy kissing his husband on the debate stage."

Limbaugh, upon whom President Donald Trump recently bestowed the Presidential Medal of Freedom, doubled down on those homophobic comments Monday when he told listeners, "Hell, the president even called me about this! He said, 'Rush, I just got to tell you something. Never apologize. Don't ever apologize.' " Trump recently said he would have no trouble voting for a gay candidate. Buttigieg, a former mayor of South Bend, Indiana, said he can't take Trump at his word.

CNN host Erin Burnett laughed at the not-so-subtle reference to Trump's alleged relationship with adult film actress Stormy Daniels and payments his former lawyer Michael Cohen allegedly made to her on his behalf.

In the immediate aftermath of Limbaugh's comments last week, Buttigieg often reiterated the line about Limbaugh being unqualified to lecture anyone on family values. But while he has been openly critical of Trump throughout his campaign, Buttigieg has rarely challenged him so personally, arguing mostly against what he calls divisive rhetoric and broken promises - not his personal life.

Earlier in the town hall, a voter asked Buttigieg how he would handle the homophobic rhetoric that will meet him should he win the nomination. He explained that when he decided to come out in South Bend, "it was tough sledding" for LGBTQ people in Republican-run Indiana, but that he got re-elected anyway. He also explained that while expansion of gay rights still has a long way to go, it "has happened at a pace that a lot of people are struggling with."

"I think that for those who haven't quite found their way all the way to the right side of history, it's important to beckon them in the right direction," Buttigieg said, recalling a woman who cheekily told him she had met his "friend" [his now-husband Chasten] the other day.

"That could have been a moment to give her a lecture on the difference between your friend and your partner, but what I realized was in her way, she was inching toward the direction of acceptance," Buttigieg said. "I think at a moment like this, it's important that we find those who are maybe not quite there yet and help them get there instead of clubbing them over the head and telling them they're bad people until they see it just the right way."