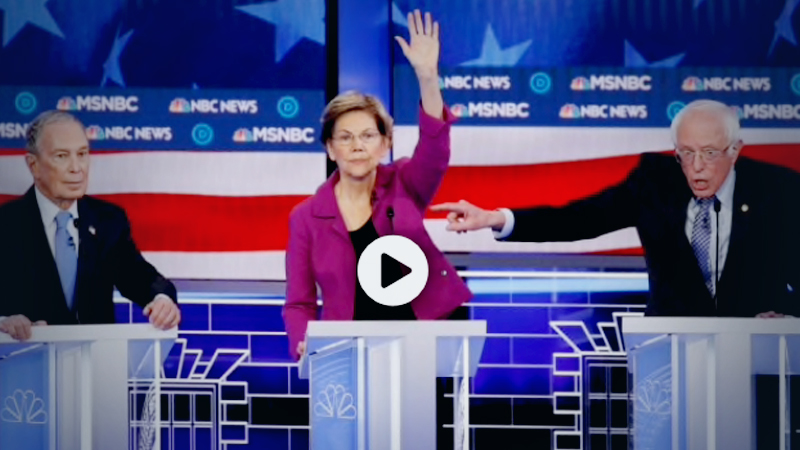 It was open season on former New York Mayor Mike Bloomberg during Wednesday night's Democratic presidential debate in Las Vegas. But although all five other hopefuls took their shots, one person emerged as the leader of the onslaught: Sen. Elizabeth Warren, Mass.

From her scathing opening remarks denouncing derogatory comments Bloomberg allegedly made about women to her relentless questioning of the nondisclosure agreements signed by his former employees, Warren orchestrated what has been described as "one of the most precise and devastating political attacks" on a debate stage in recent memory. Over the course of the two-hour event, Bloomberg, who spoke for roughly 13 minutes and struggled at times to defend himself, was targeted by his opponents 45 times, according to NBC News. Warren was behind 11 of those instances, NBC reported.

And the internet couldn't get enough.

Warren's barbs and Bloomberg's performance sparked a flood of reactions. By early Thursday, the pair continued to trend on Twitter, which was inundated with memes and commentary about them, including from President Donald Trump.

"Mini Mike Bloomberg's debate performance tonight was perhaps the worst in the history of debates, and there have been some really bad ones," Trump tweeted. "He was stumbling, bumbling and grossly incompetent. If this doesn't knock him out of the race, nothing will. Not so easy to do what I did!"

In an emailed statement Wednesday night, Bloomberg's campaign manager, Kevin Sheekey, defended the candidate's performance and praised him for being "the grown-up in the room." Sheekey also credited Bloomberg with delivering "the line of the night" when he said, "The best-known socialist in the country happens to be a millionaire with three houses," in reference to Sen. Bernie Sanders, I-Vt.

"You know you are a winner when you are drawing attacks from all the candidates," Sheekey said in the statement. "Everyone came to destroy Mike tonight. It didn't happen. Everyone wanted him to lose his cool. He didn't do it.

"It took Mike just 3 months to build a stronger campaign than the rest of the field had built in more than a year," Sheekey continued. "It took him just 45 minutes in his first debate in 10 years to get his legs on the stage."

But those 45 minutes was enough time for Warren to land some of the hardest punches of the night, leaving some viewers convinced that Bloomberg's presidential run had met its end.

That assessment was no doubt premature, at best. While political scientists have argued that debate performances have little, if any, effect on elections, candidates must proceed as though they do.

Warren launched her first broadside against Bloomberg just minutes into the debate, setting the tone for the night.

"I'd like to talk about who we're running against," she said. "A billionaire who calls women 'fat broads' and 'horse-faced lesbians.' And no, I'm not talking about Donald Trump. I'm talking about Mayor Bloomberg."

About 40 minutes later, the debate returned to Bloomberg's alleged mistreatment of women when he was asked to address the accusations. He responded by touting the number of women in leadership positions within his foundation and business, noting, "I have no tolerance for the kind of behavior that the #MeToo movement has exposed."

"I hope you heard what his defense was: 'I've been nice to some women,' " Warren said, drawing applause. "That just doesn't cut it."

Warren then immediately zeroed in on the nondisclosure agreements signed by women who sued Bloomberg, demanding that he release them from the deals and allow their alleged accounts of harassment or discrimination to become public. And from there, the situation only continued to spiral.

Warren repeatedly pressured Bloomberg to reveal how many agreements were signed and attacked his character and electability in light of the allegations, prompting the former mayor to issue defenses that many thought made him look worse.

"None of them accused me of anything other than maybe they didn't like a joke I told," Bloomberg said at one point, prompting boos and gasps from the audience. He also declined to release women from the nondisclosure deals saying, "They signed the agreements, and that's what we're going to live with."

The exchange instantly went viral, with many believing they had witnessed a blow so brutal that Bloomberg's chances of survival were slim.

Others pointed out that Bloomberg's decision to pour hundreds of millions of his own dollars into an ad-driven campaign that helped him poll high enough to qualify for the debate may not have been worth it.

"Honest Question - Has ANYONE ever lost as much money in Vegas as Bloomberg did tonight?" tweeted Ryan Fournier, co-chairman of the conservative group Students for Trump.

As critics slammed Bloomberg's "disastrous" first debate appearance, his campaign manager stressed Wednesday night that the next time around would be different. Bloomberg is scheduled to debate again on Feb. 25 in South Carolina.

"He was just warming up tonight," Sheekey said in the statement.

Warren, however, suggested in an interview with MSNBC's Chris Matthews after the debate that Bloomberg might try to redeem himself ahead of time.

"After his performance tonight, I have no doubt he is about to drop another $100 million . . . in order to erase America's memory of what happened on that debate stage," she said.