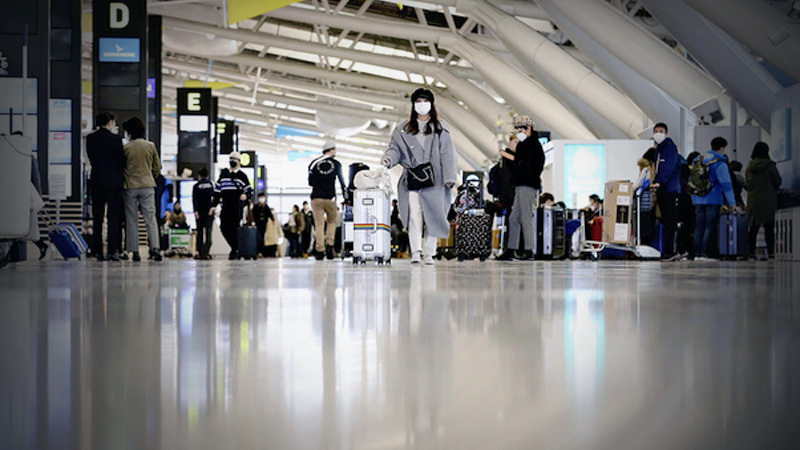 TOKYO - The number of foreign tourists to Japan in January fell by 1.1% from a year earlier to 2,661,000, down for the fourth straight month, according to the Japan National Tourism Organisation.

In late January, the Chinese government banned group tours abroad to prevent the spread of the new coronavirus, which can cause pneumonia. The number of Chinese tourists is expected to drop sharply after a series of flight reductions and cancellations between Japan and China in February.

The impact of the spread of the new coronavirus is being sharply felt across a wide range of businesses, not only airlines but also hotels, restaurants and in retail.

Fujita Kanko Inc., which operates the Hotel Chinzanso Tokyo and the Washington Hotels, last Friday projected that its consolidated net profit for the fiscal year ending December 2020 will be pushed down by ¥700 million because of the impact of the virus. Visitors from China accounted for about 46% of its approximately 1.9 million overseas guests in 2019. Takashi Wakuri, director in charge of the Planning Group at Fujita Kanko, said, “We have estimated that the current trend will continue until at least April.”

Foreign visitors’ consumption totaled ¥4.811 trillion in 2019, reaching another record. As Chinese visitors accounted for nearly 40% of the total, the plunge in their numbers would be a heavy blow to businesses in Japan. According to the Japan Association of Travel Agents, the number of Chinese visitors scheduled to visit Japan in tour groups who have canceled may reach at least 400,000 over the two-month period to the end of March.

It is not only the number of visitors from China that is likely to drop. The Thai government has been calling on its people to refrain from traveling to Japan and Singapore. As Thai visitors rank sixth on the list of number of foreign tourists to Japan, this will be a heavy blow, particularly because the number had been expected to grow.

“Although it is China that has had the biggest impact, among other countries and regions there have also been people taking steps such as refraining from traveling [to Japan],” said Hiroshi Tabata, commissioner of the Japan Tourism Agency, expressing a strong sense of alarm. But there seems to be no breakthrough in sight.

Royal Holdings Co., which manages hotel and restaurant chains and provides in-flight meal services, estimates its ordinary income will be ¥4 billion for the fiscal year ending December 2020, down about 14% from the preceding year. As a part of this, the impact of the new virus is estimated to cause a drop of ¥1.1 billion.

Company President Yasuhiro Kurosu said: “[As to the impact of the new coronavirus] we have factored in our assumption for the half-year period. Should things deteriorate further, the impact will be greater.”

Takashimaya department stores saw sales of tax-free goods for Feb. 1-13 fall by 60% from the corresponding period last year. Sales of tax-free merchandise accounted for about 8% of total sales in fiscal 2018, with purchases by Chinese visitors representing about 80%.

Among those companies that heavily depend on Chinese visitors, there are some that have already begun cutting staff. Laox Co., an operator of home appliance stores, expects its duty-free shops catering to Chinese travelers in tour groups to be affected. As a result, it has sought voluntary retirements for about 140 personnel, about 20% of its total payroll.

Is there any way to make up for the decline in the number of Chinese visitors to Japan? The government has been making efforts in recent years to attract visitors from countries in Europe and North America who tend to stay a long time and spend a lot of money. The number of visitors from such countries as the United States, Australia and Britain reached a record high for the month of January.

Whether or not this trend continues in the days ahead may be key. But Masato Koike, an economist at Dai-ichi Life Research Institute Inc., said, “If the infection spreads in Japan, too, there is a possibility that avoiding visits to Japan may spread among people from Europe and North America.”