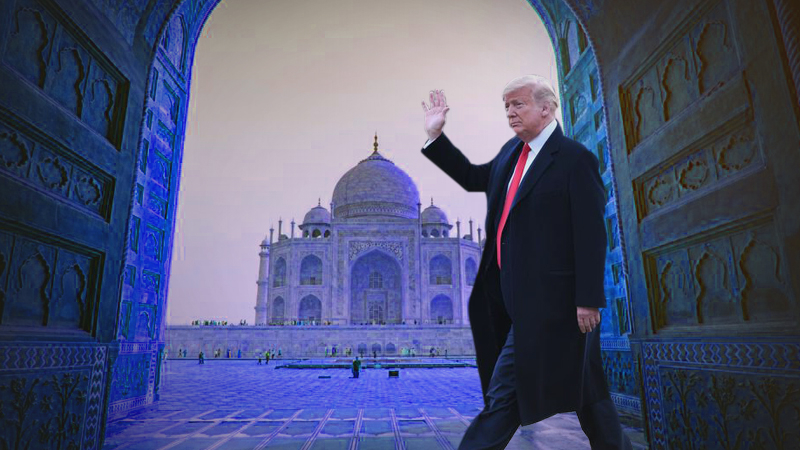 "Namaste Trump." No, the president has not suddenly discovered the meditative glow of a good yoga session. He has, however, discovered the energizing power of a good political rally, Indian-style.

President Donald Trump will almost certainly not complete a new U.S.-India trade deal during his two-day visit to the world's most populous democracy next week. The trophy agreement has been repeatedly postponed amid trade tensions.

Instead, the centerpiece of Trump's brief trip is a massive rally in Trump's honor that his host, Prime Minister Narendra Modi, has billed as "Namaste Trump." The greeting loosely translates from Sanskrit as, "I bow to you," which may appeal to Trump as much as the idea that the gathering Monday in Ahmedabad is expected to fill, or nearly fill, the world's largest cricket stadium.

Never mind that the projected stadium capacity is perhaps 120,000, not "millions," as Trump has exclaimed, and that it seems a stretch to estimate that a crowd approaching the population of New York City will line the streets for his arrival.

"We're not treated very well by India, but I happen to like Prime Minister Modi a lot," Trump said Tuesday, when asked about the dwindling likelihood that the trade pact would be ready. "And he told me we'll have 7 million people between the airport and the event. And the stadium, I understand, is sort of semi under construction, but it's going to be the largest stadium in the world. So it's going to be very exciting."

By the time an ebullient Trump spoke at a "Keep America Great" rally in Colorado on Thursday, the promised crowd had grown.

"I hear they are going to have 10 million people," he said.

The population of Ahmedabad, the largest city in Modi's home state of Gujarat, is roughly 5.5 million. In Trump's defense, the scale of a country with 1.3 billion people can be hard to fathom.

Whatever the numbers, Trump will draw a crowd that may be his largest ever. In addition to bragging rights, he hopes that popularity abroad can translate to votes back home. Although the Indian American diaspora of roughly 4.5 million people tends to vote Democratic, Trump has argued that his pro-business agenda and entrepreneurial background should be a draw.

"I am a big fan of Hindu and a big fan of India," Trump said at a 2016 campaign rally in New Jersey that was partly sponsored by the pro-business Republican Hindu Coalition.

Karthick Ramakrishnan, a professor of public policy and political science at the University of California at Riverside, directs the National Asian American Survey. He said Indian Americans have been among the most liberal subset of Asian American voters.

"The Democratic Party had a lot more credibility as being seen as the party of anti-discrimination, more welcoming to immigrants, to Indian Americans," Ramakrishnan said. "That's made it very challenging, even before Trump, in terms of making inroads with the Indian American community."

Ramakrishnan said he does not discount the value of symbolic events such as Trump's participation in a huge rally in Houston for the visiting Modi last fall, or the larger lovefest Modi has promised to Trump in India. But he said the effect on voters is likely to be slight.

"Whatever charm offensive that Trump engages in, it's going to have limited impact, just given the accumulated weight of other factors that have played out over time," he said.

Against the appeal of Trump's naming of Indian Americans to prominent government positions - such as Nikki Haley to the post of U.S. ambassador to the United Nations - voters of Indian extraction will weigh "statements that have ranged from racially insensitive to outright racist" as well as an end to a visa program that benefited some Indian families, Ramakrishnan said.

Many Indian Americans live in the solidly blue states of California and New York, but there are also significant voting populations in Texas, Virginia, North Carolina and Georgia, all states Trump thinks he can win this year, as well as wealthy potential donors in states that won't go for Trump.

Richard Rossow, an India scholar at the Center for Strategic and International Studies, said the outreach effort may be worthwhile "if the Trump administration feels they can tap into that vein, as they did in the major engagement in Houston, as they're doing with the big rally and the bonhomie that they're trying to develop and rapport with Prime Minister Modi."

Trump's affinity for Modi underlies the striking decision for a homebody president seeking reelection to travel halfway around the globe for a largely ceremonial social call.

Modi is a Hindu nationalist with whom Trump shares a nativist governing philosophy and a flair for showmanship. It doesn't hurt that Modi has also shown a knack for pushing his own nation's agenda while stroking the U.S. leader's ego.

"His name is familiar to every person on the planet," Modi said as he introduced Trump in Houston last year.

Trump appeared to have a delightful time in the unaccustomed role of second fiddle, marveling at the visiting Indian leader's popularity with Indian Americans, including many who had traveled long distances. He likened Modi to Elvis Presley, and the two leaders held hands.

Trump apparently took note when Modi flattered him with assurances that he is popular among Indians in India.

Trump is more popular in India than he is in many other nations, including traditional allies such as Germany and Britain. And whereas popular opinion of Trump has declined in many quarters overseas since he took office, he has roughly quadrupled his support in India since 2016, according to the Pew Research Center. About 56% of Indians have a positive view of Trump now, Pew's survey found. Supporters of Modi's Bharatiya Janata Party were more likely to hold a favorable view of Trump.

The U.S.-India relationship has grown more important and more stable over the past decade, and the potential for widening trade, military and tourism ties appeals to Trump's business sensibilities. The Trump Organization has real estate holdings in the country, and Trump will hold an event in New Delhi aimed at drumming up business for U.S. firms.

Friction over India's purchase of a Russian-made missile shield system hangs over Trump's visit, atop frustration on both sides that months of fitful discussions failed to produce a final trade pact. The two countries had hoped to have the pact completed for Modi's U.S. visit last September.

Trump told crowds last week that he wants to have a heart-to-heart with Modi over tariffs and a trade imbalance, and he hinted at a trade announcement, if not the full deal he had confidently predicted was at hand months ago. He suggested to reporters Tuesday that the full agreement might not come until after the U.S. presidential election.

"We got to talk a little business. They've been hitting us hard. They give us tariffs - one of the highest in the world is India," Trump said in Colorado.

Trump will be the fourth consecutive U.S. president to visit India, a major Asian economic power that is a regional counterweight to China. India is also a potent military power, and Trump is likely to try to close two significant arms deals while he is in New Delhi, said Jeff Smith, a South Asia research fellow at the Heritage Foundation. He will also point to a growth in energy cooperation, Smith said.

"I actually think this administration has quite a bit to celebrate in terms of adding the building blocks" of the two countries' economic and strategic relationship, Smith said.

Trump administration officials who outlined the 36-hour trip for reporters Friday said Trump will address alleged human rights abuses in Kashmir and U.S. concerns that Modi is discriminating against non-Hindus. Analysts have predicted that any real criticism on those issues would be delivered in private.

"President Trump will talk about our shared tradition of democracy and freedom of religion in his public remarks and certainly in private," one official said. The officials spoke on the condition of anonymity because they were not authorized to speak on the record.

A light presidential touch on human rights has worried some on Capitol Hill.

Four senators - two Republicans and two Democrats - sent a letter to Secretary of State Mike Pompeo this month requesting an assessment of the human rights situation in Kashmir and of the rights of religious minorities in India.

"India has now imposed the longest-ever Internet shut down by a democracy, disrupting access to medical care, business, and education for seven million people. Hundreds of Kashmiris remain in 'preventive detention,' including key political figures," the senators wrote.

In an interview, Van Hollen said the senators had not yet received a response. If Trump does not take a firm stand against Modi's policies, the silence can be read as acquiescence, Van Hollen warned.

Young said that shared priorities on countering China do not give India a pass on other issues of importance to the United States.

"Recent events have raised a number of concerning issues, most notably being the crackdown in Kashmir and the growing trend of Hindu Nationalism in India's political system," Young said in a statement to The Washington Post. "As the President visits India, I hope he will deliver a message rooted in our values and that India's leadership will stand up to defend the basic freedoms and human rights for all."

The visit may be Trump's last trip abroad before the presidential election this year that isn't associated with a meeting of international leaders, Smith and others said. Trump intends to travel heavily within the United States as he campaigns for himself and Republicans.

As he does, Trump may be wistful about his India whirlwind.

"Prime Minister Modi said we will have 10 million people greet you. Here's my problem," Trump told what he said was a "packed house" and overflow crowd in Colorado.

"It's going to look like peanuts from now on," he said, to laughter.

"I'll never be satisfied with the crowd if we have 10 million people in India. How can they be satisfied if we fill up like a 60,000 seat stadium? Big deal. See, I'm getting spoiled."