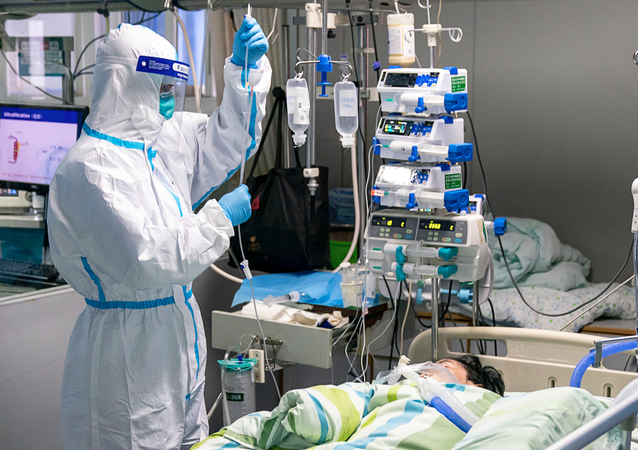 HONG KONG - Coronavirus outbreaks in South Korea and Italy continued to expand rapidly on Sunday as both countries reported a slew of new cases and Italian authorities racing to seal off hotspot towns.

While the latest Chinese figures showed new cases largely concentrated in Hubei, concern was growing about the virus in other parts of the world, including in Europe, which had yet to see a large-scale outbreak until now.

South Korea reported a significant rise in cases on Sunday, with 169 new cases bringing the total to 602, and two more deaths for a total of six. Italy said the number of confirmed cases had reached 132, up from three in a matter of days.

The sudden outbreak in Italy caught authorities there off guard, while triggering severe interruptions of the sort that have upended life in China. Universities across northern Italy, where the outbreak is concentrated, are shuttered; major soccer matches have been canceled. Checkpoints have been set up in roughly a dozen towns to prevent most people from entering or leaving.

The Chinese government announced there had been 648 more confirmed cases of the novel coronavirus outbreak as of late Saturday evening, bringing the total in mainland China to 76,936, with 97 more deaths from the outbreak bringing the total up to 2,442 across the nation.

Within China, the outbreak remains worst in Hubei province and its capital city of Wuhan, where the outbreak first emerged in December. The new official figures showed that the vast majority of new cases confirmed across China - 630 - were in the province, while all but one of the new deaths were in Hubei.

Hubei has been under lockdown since Jan. 23, an unprecedented organizational response to a health crisis. As of Sunday, three separate cruise ships have arrived in Wuhan to house medical workers for the city's stretched health care system, drawing mixed reactions from Chinese internet users.

Japan's NHK reported the same day that cases had risen to 135 - not including the cases linked to the Diamond Princess, where at least 650 people who traveled aboard the ship are now confirmed cases.

The Diamond Princess outbreak alone has had a global impact. At least 18 Americans and seven Australians have tested positive for the virus after returning to their home countries, and medical authorities in both countries say they expect to find more cases as more tests are carried out.

Twelve Indian crew members have so far been confirmed as cases aboard the ship, India's NDTV reported on Sunday.

And a major outbreak has occurred in Italy, where cases surpassed 100 on Sunday, with two deaths, making it the worst-hit European nation.

With some new indications that the coronavirus may have a longer incubation period than 14 days and a variety of cases with no clear link back to Hubei, as well as lingering worries about Chinese figures, health officials remain concerned about the risk of a global pandemic.

The large number of new cases confirmed in Hubei continue to present challenges for the province, which has now been on lockdown for almost a month.

On Sunday, Wuhan's Union Jiangbei Hospital announced that a 29-year-old Xia Sisi, a front line doctor from the department of gastroenterology, had died of coronavirus early on Sunday morning. Xia had been hospitalized on Jan. 19, the hospital said.

The toll on health workers in Hubei has been heavy. China Daily reports that another 29-year-old doctor in Wuhan, Peng Yinhua, died on Thursday after postponing his own wedding to help treat the outbreak.

China is bringing in seven cruise ships to help house medical workers for the coronavirus response, with the first, named Blue Whale, arriving on Friday evening followed by Changjiang Fu Tai and Changjiang Fu Tai No. 2 on Saturday.

In total, the ships will provide 1,267 beds for health workers, according to local media reports, and they have taken extensive efforts to provide a safe environment, including having a dedicated ship to dispose of waste. But on Chinese social media, opinions were split about the idea, with some comparing it to the situation aboard the Diamond Princess.

On Weibo, some users suggested that air-conditioning in the ships would need to be sealed and the plumbing inspected. "If I were a doctor, I would set up a tent by myself," one user wrote.

The spread of the outbreak in confined spaces continued to be a worry. The local government announced that there had been 32 new confirmed cases in Hubei's prison system as of Saturday, bringing the total to 304.

On Saturday, the provinces of Sichuan and Heilongjiang announced that they would move toward a "wartime" management system in prisons and drug treatment centers to try to prevent the spread of the novel coronavirus.

Worries about a longer incubation period have also arisen in Hubei after a 70-year-old man infected with coronavirus did not show symptoms until 27 days later, the local government reported on Saturday.

South Korea's Centers for Disease Control and Prevention reported 169 additional cases of the coronavirus on Sunday, raising the national tally of the virus to 602.

South Korean President Moon Jae-in told an emergency meeting that the country was now at a "crucial moment" that called for all out efforts from the government and public alike in face of the virus.

Moon raised the national alert level to the highest of "red," a first for South Korea since the 2009 epidemic of H1N1 swine flu.

The South Korean leader said the government is confident it can tackle the transmissions as most of the new cases are traced to existing clusters. The majority of South Korea's coronavirus cases have been linked to two clusters at a church in southern city of Daegu and a nearby hospital in Cheongdo County, North Gyeongsang Province.

Moon said emergency support was being mobilized for Daegu as it was "nearing its capacity."

"Please avoid excessive anxiety and trust the government's actions," Moon said in a message to the public. "If all the people join with confidence, we can win. Trust and cooperation is the way to win this battle against the virus."

Over half of South Korea's 556 cases are traced to the Daegu church, which is a branch of Shincheonji Church of Jesus the Temple of the Tabernacle of the Testimony. Shincheonji, a fringe religious sect, is often described as "cult" by critics.

South Korea's Yonhap News Agency reported Sunday that a 56-year-old woman who had been diagnosed with the virus died at a university hospital in Daegu.

The KCDC has confirmed the fifth coronavirus death in South Korea. The woman, in her 50s, had been suffering from chronic kidney disease before getting diagnosed with the virus on Tuesday. The KCDC said it is investigating the exact cause of her death.

A different church in southern city of Busan also reported three cases of the virus, one of whom is the son of a South Korean man who had been in Wuhan. The father himself, however, had tested negative for the virus after returning from Wuhan, according to the KCDC.

An official from the Iranian Health Ministry told state television on Sunday that there had been 43 confirmed cases in the country, including eight deaths, Reuters reports.

The outbreak has increased tension between Iran, already isolated by sanctions, and its neighbors. Supreme Leader Ayatollah Ali Khamenei said Sunday that the threat of coronavirus had been exaggerated by the country's enemies who hoped to cast doubt upon Friday's parliamentary election.

On Saturday, however, Iran itself ordered the closure of schools and universities in a bid to prevent the outbreak from spreading further.

In Israel, reports that a group of South Koreans who tested positive for the infection had visited some of the country's most popular religious and tourist spots prompted concern across the country.

Dozens of students who may have been in proximity to the South Korean tourists were directed to stay in home-based quarantine for two weeks, as were hotel housekeepers and employees of Masada, Tel Ber Sheeva and other national parks.

Non-Israeli travelers from South Korea and Japan have been barred from entering the country, according to local media reports, and Israelis arriving from multiple Asian countries face two-weeks of mandatory quarantine.

The number of new coronavirus cases in Japan has risen to 135, public broadcaster NHK reported, excluding the case load from the Diamond Princess.

One Japanese woman who had been released from the ship last week developed a fever and tested positive for the virus on Saturday, Japan's health ministry said. The woman had tested negative on Feb. 14 and been allowed to return to her home in Tochigi prefecture, north of Tokyo.

The latest case had reinforced concerns about Japan's decision to allow passengers from the Diamond Princess to return to their homes if they tested negative for the virus after an initial 14-day quarantine period.

NHK reported on Sunday that a third passenger had died after leaving the ship. The cause of death was pneumonia, Japan's health minister said, but the ministry did not disclose whether the man, who was in his 80s, had been infected with coronavirus.

The United States and other countries have imposed an additional 14-day quarantine on passengers returning from the ship, out of concern the virus was still spreading around the vessel during the initial period, but Japan has insisted its arrangements to isolate passengers and prevent the virus spreading were sound.

Japan's health ministry says it set the conditions for leaving the ship after hearing experts' views. But it says it takes the latest development seriously, NHK reported.

Japanese Emperor Naruhito, in his first news conference since ascending the throne, said on Sunday that he was looking forward to the Tokyo Olympics in the summer but that he was concerned about the spread of the new coronavirus, Reuters reported.

"This new coronavirus is a concern. I would like to send my sympathies to those who are infected and their families," he said, speaking on the occasion of his 60th birthday.

Japanese Prime Minister Shinzo Abe ordered a government task force to prepare for a potential surge in the number of people infected with the new coronavirus, NHK reported.

Abe said the outbreak has entered a "crucial phase" with cases emerging around the country where the infection route or a link to China could not be traced. He said authorities need to prepare for a possible jump in patient numbers, by focusing efforts on preventing infected people from becoming seriously ill.

The State Department on Friday raised its travel advisory for Japan and South Korea to Level 2 on its four-level scale, urging older travelers and people with chronic medical conditions to consider delaying unnecessary travel.