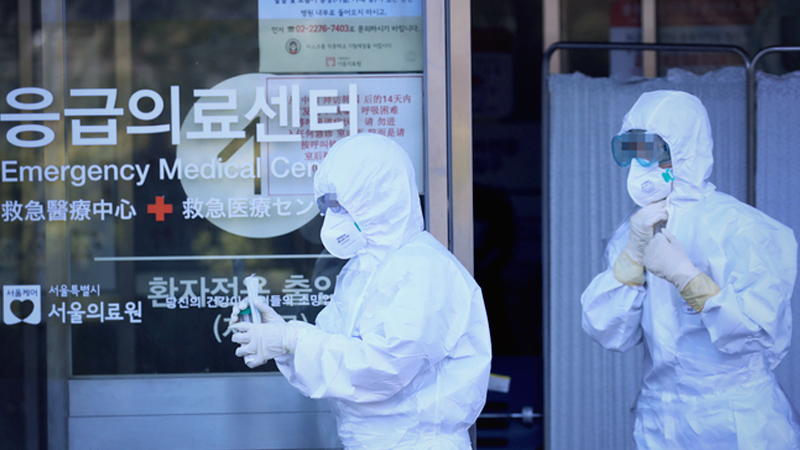 By The Korea Herald
Yonhap

South Korea reported its seventh fatality from the new coronavirus and 161 new confirmed cases on Monday, bringing the total infections here to 763.

A 62-year-old man, who is tied to a hospital in the southeastern county of Cheongdo, died of the virus on Sunday, health authorities said.

So far, seven people have died in South Korea from the new virus since its first outbreak in late January.

Two clusters of infections -- at a branch of a religious sect in the southeastern city of Daegu and a hospital in its neighboring county of Cheongdo -- have continued to rise sharply, taking up more than half of the total cases in the country.

The Korea Centers for Disease Control and Prevention (KCDC) did not elaborate on whether the seventh victim, the 286th infected patient, had an underlying illness. Of the seven deaths, five have been linked to the Cheongdo hospital.

The sixth victim of the virus was also a patient at the Cheongdo hospital, where the country's first COVID-19 fatality happened. The 59-year-old man was confirmed to be infected last Wednesday and died at Dongguk University in Gyeongju, North Gyeongsang Province, while being treated for the disease.

Of the 161 new cases, 142 are in Daegu, 300 kilometers southeast of Seoul, and neighboring North Gyeongsang Province.

Another three were reported in Seoul, the KCDC said in a statement.

The number of cases that can be traced to the church services reached 458, accounting for about 60 percent of the total cases here.

Authorities said they have acquired a list of members from the Daegu-based Shincheonji church and are closely monitoring them.

The KCDC earlier said it has placed more than 9,334 Shincheonji members in self-quarantine. Of them, 1,248 have shown COVID-19-related symptoms.

On Sunday, South Korea raised the virus alert level to the highest of "red," marking the first such threat level since the 2009 outbreak of H1N1 swine flu.

The top alert level allows authorities to order the temporary shutdown of schools and cut flights from and to South Korea.

The education ministry has instructed all kindergartens and schools to delay their new semester by a week in an effort to prevent the virus from spreading more widely.

The number of people being checked for the virus and under quarantine came to 8,725, it added. The country has tested a total of 27,852 suspected cases, with 19,127 testing negative. (Yonhap)