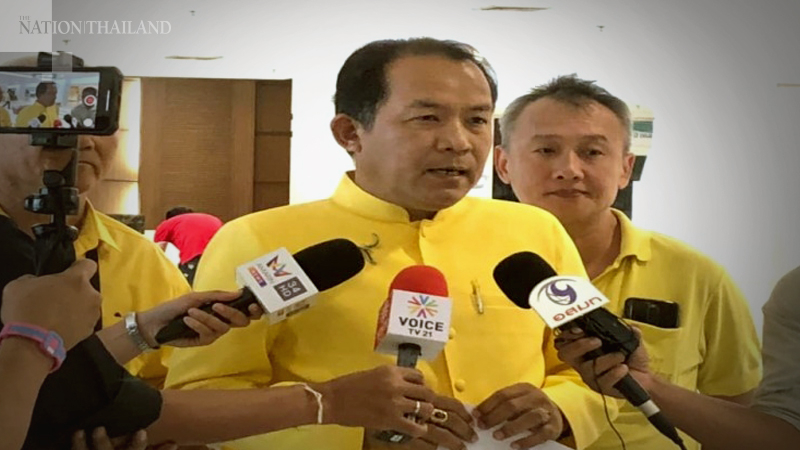 Srisuwan Janya, an activist and secretary-general of the Society for Defence of the Thai Constitutions, submitted a letter to the Election Commission (EC) on Monday (February 24) urging it to pursue legal actions against Thanathorn Juangroongruangkit and 16 executives of the recently dissolved Future Forward Party (FWP) for violation of 2017 Organic Law on Political Parties.

The Constitutional Court on February 21 ordered the Future Forward Party dissolved on the grounds that a loan of Bt191.2 million its wealthy leader Thanathorn extended to party members was a violation of the organic law’s Section 66 that limits the amount of money that can be collected in donations at Bt10 million, and Section 72 that prohibits political parties and their members from receiving money or assets from any sources when they know they are unlawful or have reasonable doubts of being unlawful.

The court also revoked party executives’ right to contest in any elections for 10 years and prohibited them from registering a new party for the same length of time.

“The penalty for violation of Section 66 will include imprisonment for up to five years, a fine of up to Bt100,000 or both for the donator,” said Srisuwan. “Meanwhile, the party that received illegal donations will be barred from the next election and fined up to Bt1 million and its executives be banned from politics for five years, whereas the money in excess of Bt10 million, or equal to Bt181 million in FWP’s case, must be seized and deposited to the Political Party Development Fund”.

“Furthermore, FWP had used its revenues that came from fundraising, donations and souvenir selling to pay back the loan to Thanathorn, which violated Section 87 of the organic law that prohibits the use of a party’s revenues for purposes other than the party’s political activities,” added Srisuwan. “The violation of this section is punishable with 5-10 years imprisonment and fine of Bt100,000-200,000, or both.”

“The Society for Defence of the Thai Constitutions wishes to urge the ECT to pursue legal actions against Thanathorn and FWP executives to set a standard for other political parties in Thailand. If the ECT ignores this request they might be violating the Criminal Code Section 157, which prohibits an official from not exercising any of his functions to the injury of any person,” added Srisuwan.