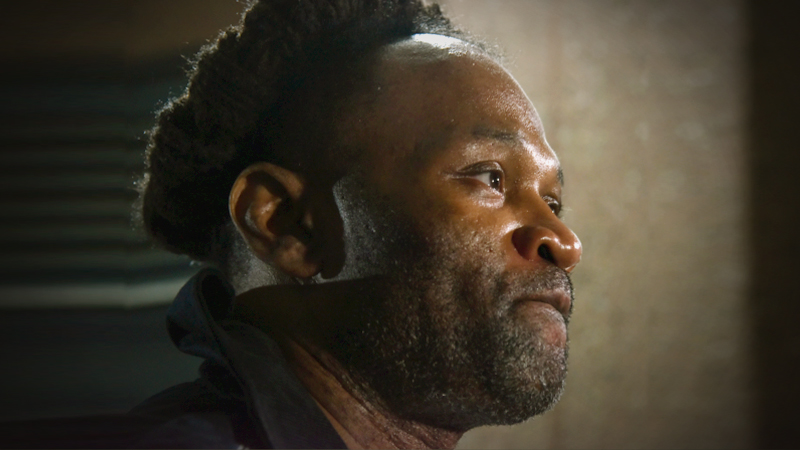 Calvin Bright has been released after spending more than 25 years incarcerated in a murder case. He was not exonerated but has maintained his innocence. MUST CREDIT: Washington Post photo by Jahi Chikwendiu

WASHINGTON - Calvin Bright had spent more than two decades imprisoned for a double murder he maintains he did not commit when new evidence surfaced in the case. He learned authorities had withheld a tip that another man was the killer.

Bright was presented with a choice.

He could continue his fight for a new trial in the hope he might someday be acquitted. Or, if he agreed he would not sue the District of Columbia for false arrest, he could be released immediately but remain a convicted murderer.

Bright earned college credits from classes at the D.C. jail and hopes to one day become a private investigator. But as he prepares for his future, Dwan Peay, the brother of one of the murder victims, is angry and full of questions.

How could the man who was found guilty of killing his sister be released early for something Peay said he views, based on a letter from D.C.'s U.S. attorney's office, as a "technicality?"

Peay's 28-year-old sister, Tammy, along with her friend, 33-year-old William Frederick Ramsey, were killed early on a July morning in 1994, near the neighborhood where they grew up.

During the trial in 1995, two witnesses testified that they saw Bright shoot the friends. Bright's public defender argued Bright was the victim of mistaken identity. Still, he was found guilty of two counts of first-degree murder while armed.

As he served a sentence of 65 years to life in prison, Bright said he focused on trying to clear his name. While working a $70-a-month job in prison libraries, stocking bookshelves and making photocopies for inmates, he also studied law books.

For years, Bright filed court motions seeking relief. In 2007, a judge assigned D.C. attorney David Benowitz to his case. Benowitz and Bright spent 10 years searching for ways to get Bright's conviction overturned. Then, in 2017, after Benowitz filed a Freedom of Information Act request on the case, a prosecutor within D.C.'s U.S. attorney's office sent a folder created by the lead detective on the case.

Inside was a note written four days after the slayings by a D.C. police lieutenant. It said an officer had received a tip that was about a man who lived in that neighborhood and was nicknamed "Catman."

"He had receive info. that Catman was the subject who committed the double murder on Central Place, Northeast," the officer wrote. The officer also supplied that person's real name, Social Security number and police department identification number.

That note, however, was never mentioned to Bright's attorneys. "That was definitely the jackpot," Benowitz recalled.

In criminal cases, prosecutors are required to disclose all evidence to defense attorneys, even if that evidence undermines or jeopardizes their case. Not doing so could ultimately result in a judge throwing out the entire case.

After questioning the officers involved in writing the "Catman" note, Benowitz said he learned police never investigated if the man was actually involved.

In hindsight, Bright said he was not surprised police charged him in the killings. Not because he was involved, but because he was known by officers because of his numerous arrests for selling PCP and crack cocaine.

"After my parents divorced, I began running around with the wrong crowd. I know what I was doing was wrong, but it doesn't justify them wrongly arresting me for murder," he said. "I was a convenient suspect for them."

About three weeks after the shootings, detectives picked Bright up and took him to the station. "They kept asking me where I was that night. It was a month later, I couldn't remember where I was," he said. He was arrested and charged in the homicides.

In an interview, Dwan Peay, 54, said his sister had attended a cookout earlier that evening near her old neighborhood. After the shooting, he recalled, residents in that area began calling his family's home.

Peay said he was shocked when neighbors told his family that Bright was the shooter. He and his sister grew up with Bright, he said. Peay also remembered that Bright had a crush on his sister when they were young.

After hearing of the other suspect, Peay said he also knew "Catman." But it was odd, Peay said, that anyone in the close-knit neighborhood would confuse "Catman" and Bright, because both men were well known there, and they did not look alike. "Catman," he said, was given the nickname because of his light eyes.

Ramsey's family members could not be reached for comment.

During trial, a witness testified he had heard Bright threaten Ramsey over a drug debt. Tammy Peay, authorities determined, was killed because she was with Ramsey and would have been a witness.

According to court records, two other witnesses told authorities it was after 4 a.m. on July 24 when, under the streetlights, they saw the shooter grab Tammy Peay and put her in a bear hug. One witness said she heard Tammy Peay say "Get off me" before the shooter fired once at her head.

Both witnesses said they watched Ramsey, who was wearing a cast on his leg, try to run. But he fell. The shooter, the witnesses said, stood over him and fired multiple times before hopping onto a 10-speed bike and pedaling away.

The two witnesses identified Bright as the shooter. But Benowitz questions their credibility. Both had admitted to using drugs and alcohol that night, Benowitz said. And one of the witnesses had a criminal case in Maryland and lied to a grand jury about his identity when he testified in the murder case.

Benowitz believes "Catman" was responsible for shooting Ramsey in the leg during a dice game days before his death, giving him motive to return and fire the fatal shots days later.

After court hearings last year, Benowitz sought more information on who knew about the "Catman" note. Over repeated objections from prosecutors, Benowitz planned to call Ken Kohl, the former prosecutor on the case, to testify.

It was then when prosecutors made Bright an offer. To bring the hearings to an end and avoid having one of their colleagues testify, prosecutors agreed to Bright's release from prison. In exchange, prosecutors required that Bright sign an agreement stating he would not sue the city.

Bright decided facing another trial was riskier than accepting the prosecution's offer of time served. So he abandoned his quest for exoneration.

"I spent 312 months, 26 years, in a cage," Bright said. "I had to weigh what was important. I was supposed to trust the same government again with a new trial? I wanted to get out of prison and get on with my life."