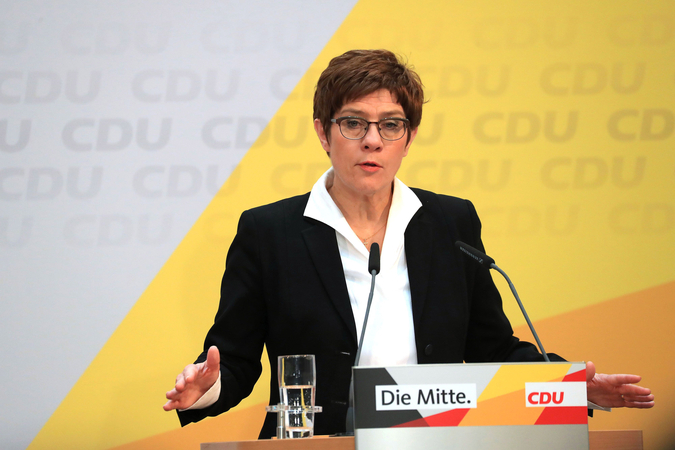 Annegret Kramp-Karrenbauer, outgoing leader of the Christian Democrat Union (CDU), gestures while speaking during a news conference at the CDU headquarters in Berlin on Feb. 24, 2020. MUST CREDIT: Bloomberg photo by Krisztian Bocsi.

Chancellor Angela Merkel's Christian Democratic Union will accelerate the process of appointing a new leader as the party struggles to emerge from political turmoil.

A special party conference will be held to choose a successor to Annegret Kramp-Karrenbauer on April 25 in Berlin in what will be an open fight to lead Germany's strongest party.

Next up in the process will be for people to actually declare their candidacies this week. So far, only one candidate -- Norbert Roettgen, an outsider who was fired by Merkel in 2012 -- has publicly declared his intentions.

Kramp-Karrenbauer -- the CDU chief who shocked Germany's political establishment two weeks ago by abandoning ambitions of succeeding Merkel -- said she spoke with four potential candidates and all pledged to support the full breadth of the party, as it seeks to close ranks after the recent upheaval.

The candidates -- including Friedrich Merz, Armin Laschet, Jens Spahn and Roettgen -- "very clearly declared that they will respect any decision of the party conference, irrespective of what it is," she said, speaking to reporters in Berlin after a leadership meeting on Monday. It's unclear whether more hopefuls will come forward, she said.

Kramp-Karrenbauer originally planned to have the party decide on a chief this summer and sign off on the pick at a regular party convention in December.

Concerns about the risks of an extended power struggle prodded numerous party officials to push for a faster process. A disastrous election result in Hamburg on Sunday, when the CDU posted its worst performance in the city state since World War II, drove home the need for urgency.

The emerging number of contenders and the tighter timetable will stoke competition for the post. The incoming CDU chief would have the inside track to run for chancellor at the next election, which is due in the fall of 2021 at the latest. Kramp-Karrenbauer said the decision on the chancellor candidate will be made later in consultation with the Bavarian sister party.

If the winner ends up being from the more conservative wing of the CDU rather than a centrist in Merkel's mold, the faster decision could intensify pressure on Merkel to step down early. Kramp-Karrenbauer tried to brush aside risks to Germany's stability.

After a renewed round of talks with the candidates, "it has become very clear again that everyone assumes that there will be good cooperation both with the CDU caucus in the Bundestag and with the CDU-led federal government," Kramp-Karrenbauer said. "That is certainly a requirement that applies to all candidates."

With a new CDU head in place as early as the spring, the prospect of an early exit for Merkel was enough to prompt the Social Democrats to say they won't support a new chancellor. The coalition agreement the SPD signed in March 2018 was with Merkel, according to the SPD's general secretary, Lars Klingbeil.

"If the CDU has any ideas of somehow swapping out the chancellor, then the SPD will very clearly not go along with that," Klingbeil told Bild in an interview.

Kramp-Karrenbauer attacked the Social Democrat, accusing him of misleading the public over the CDU's stance on the far right.

The split between party chief and Merkel's role in the chancellery proved unworkable for Kramp-Karrenbauer. Her withdrawal on Feb. 10 escalated a crisis that began when CDU lawmakers in Thuringia cast their lot in with the anti-immigrant Alternative for Germany to install a premier in the eastern state, breaking a taboo and defying marching orders to not cooperate with extreme right or left.

At stake in the CDU leadership battle is the direction of Europe's largest economy as the European Union grapples with stagnating growth, fallout from U.K.'s exit and a withering of the global order as the U.S. recedes from view and China strengthens its footprint.

"There is deep insecurity in the party," Spahn told reporters before the meeting on Monday. "We need to make sure that Merkel is not the last CDU chancellor."

The vote in Hamburg reflected a nationwide realignment in Germany's political establishment with the CDU declining and the Greens soaring. Leaders in Merkel's drew a straight line from the fiasco in Thuringia to the Hamburg result.

"What happened there and all the discussions linked to it was anything but a tailwind for the CDU," said Paul Ziemiak, the party's general secretary.