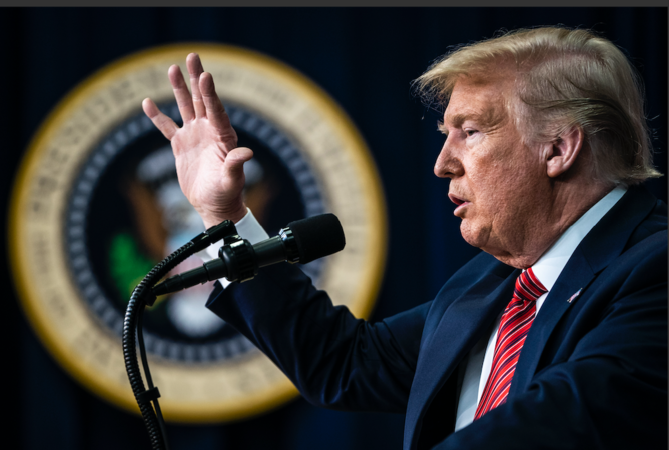 WASHINGTON - As President Donald Trump spent Monday sightseeing in India, the U.S. stock market plunged amid growing concerns about a deadly virus spreading quickly across continents - a split screen that brought into stark relief how the coronavirus is testing the White House and undercutting Trump's central reelection message.

The Trump administration's disjointed handling of the outbreak has faced mounting criticism as the president's allies have scrambled to take preventive steps while seeking to reassure the public, at times struggling to explain their decisions and offer a consistent message.

The president's strategy of publicly downplaying the threat that the virus poses to the United States was undermined Monday as the Dow Jones industrial average - a measure he follows closely - shed more than 1,000 points for its largest drop in two years. Investors acted on growing fears of a worldwide pandemic as the virus took hold in multiple countries, threatening to disrupt global commerce.

Trump, who spent Monday visiting the Taj Mahal and other cultural sites, tried to project a sense of calm after the markets closed.

"The Coronavirus is very much under control in the USA," he wrote on Twitter. "We are in contact with everyone and all relevant countries. CDC & World Health have been working hard and very smart. Stock Market starting to look very good to me!"

For a president who has governed "by tweet and circus," a potential global health crisis that blunts economic growth could expose one of Trump's main weaknesses as he prepares to face voters in November, said Russell Riley, a presidential historian at the University of Virginia's Miller Center of Public Affairs.

"Having hollowed out the senior leadership of so many departments of the government - especially in the scientific community - he is now in desperate need of professional guidance among people he has abused for three years," Riley said. "If the markets continue to drop and the medical news gets very bad, then this president is singularly ill-prepared to deal with it in a rational manner."

Behind the scenes, the Trump administration rushed to expand its response to the coronavirus and rebound from missteps that had drawn the president's ire and raised questions about the government's readiness to address the outbreak.

The White House prepared to request an emergency spending package from Congress that could seek close to $1 billion, according to several people briefed on the planning who spoke on the condition of anonymity to discuss internal deliberations. The request could be sent to Capitol Hill in the next few days.

National security adviser Robert O'Brien has discussed possible options for global coalitions and outreach with other senior White House officials in recent days, according to a White House official and a veteran Republican who have been briefed on the deliberations. One option includes having Trump call for a U.N. Security Council meeting to force China to share more information about the outbreak, which began in December in Wuhan and quickly spread from the world's most populous nation.

But those conversations remain preliminary, and no decisions have been made about whether Trump will ratchet up his pressure on China or global groups in the coming days, those two people said.

A spokesman for the National Security Council declined to comment.

Longtime Trump associates and observers said the president and his team are not panicked but are aware of the political cost of a sustained market drop.

"If he gets a real correction, a 10 to 15% down draft in the market, it'd take one of the legs off of a very big part of his reelection campaign," said financier Anthony Scaramucci, the onetime White House communications director who has broken with Trump.

Major Republican donors are closely tracking developments and the political consequences not just of the coronavirus but the rise of Sen. Bernie Sanders, I-Vt., in the Democratic presidential race. Those two issues, veteran GOP financier Spencer Zwick said, are now front and center for the party's leading donors.

"We've always said the president has a better shot of being reelected in a good market, but there is talk of whether there could be a black swan event that changes things," Zwick, a longtime organizer for former House speaker Paul Ryan and Sen. Mitt Romney, R-Utah.

Trump's allies have followed the president's lead in downplaying talk of a major economic slump resulting from the outbreak.

"I don't think he's disturbed by ups and downs in the market," said Chris Ruddy, a Trump confidant and chief executive of Newsmax Media. "The economy is so strong that even if it weakened a little bit, he'd still have a great record."

Still, Ruddy said a months-long market downturn "could be problematic" for Trump's reelection.

White House trade adviser Peter Navarro insisted in an interview that the administration is working aggressively to coordinate the federal response, including speeding up efforts to find a vaccine for a virus that has spread to more than 25 countries.

"We're working in Trump time," Navarro said Monday. "That means you go as fast as possible - like seeking to cut vaccine development time in half."

Navarro, who appeared on Fox Business Network on Monday, was one of the Trump allies who tried to calm the markets by arguing that the U.S. economy remains strong and that Trump is in command.

Trump's campaign also defended the president's handling of the crisis, pointing to his early steps to block some travel from China.

But internal tensions have plagued the administration's response, which is being run by a task force with O'Brien and Health and Human Services Secretary Alex Azar at the helm.

Trump and Azar's department have clashed in recent days over HHS's handling of the repatriation of Americans with the virus.

Trump grew furious with senior advisers last week over a decision to allow 14 Americans who tested positive for coronavirus to return to the United States from Japan after being assured that infected patients would remain in quarantine overseas, according to administration officials.

He again became irate after learning over the weekend that federal officials planned to house some coronavirus patients in an Alabama facility despite protests from local officials, said Rep. Mike Rogers, R-Ala.

"It was really poorly handled," Rogers told reporters Monday, adding that Trump used colorful language to express his displeasure during a call from Air Force One. "The president just told me in our third phone call yesterday, somebody's going to get fired over this. But I don't know who."

Azar will be facing members of Congress this week for hearings about the proposed HHS budget, starting Tuesday. He likely will be pressed on the administration's handling of the coronavirus.

While the White House is preparing a budget request and could seek close to $1 billion from Congress, there is debate inside the administration about whether the request should be far larger, according to a senior administration official who requested anonymity to discuss internal plans.

"It's going to start around $1 billion and we'll go from there, but the numbers are fluid," the official said.

By comparison, the Obama administration requested $6 billion in emergency funding during the 2014 Ebola crisis.

The coronavirus outbreak has infected more than 77,000 people, killing at least 2,600. Countries including South Korea, Japan, Italy and Iran have seen their number of cases rise in recent days, in some cases dramatically.

An additional 18 people in the United States have tested positive for the coronavirus, Centers for Disease Control and Prevention officials said Monday, bringing the total number of confirmed U.S. cases to 53.

Democrats have slammed the Trump administration's response, calling it haphazard and lax.

"The Trump administration has been asleep at the wheel," Senate Minority Leader Chuck Schumer, D-N.Y., said Monday on the Senate floor. "President Trump, good morning. There is a pandemic of coronavirus. Where are you?"