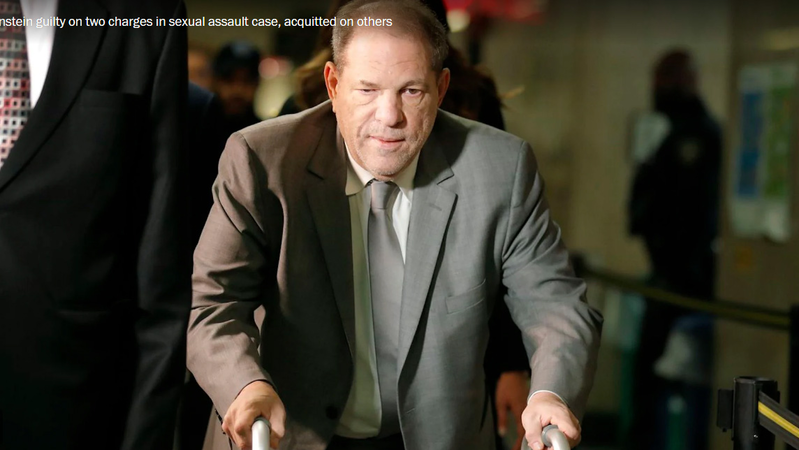 NEW YORK - Harvey Weinstein was found guilty of sexual assault in a New York court Monday, the first conviction to emerge from the dozens of misconduct allegations against the once-powerful movie producer.

The jury determined that Weinstein forced oral sex on former production assistant Mimi Haleyi at his apartment in July 2006 and raped former aspiring actress Jessica Mann at a hotel in 2013.

He was found not guilty of the most severe charges, of predatory sexual assault, which would have acknowledged a pattern that included forcing sex on actress Annabella Sciorra in 1993 or 1994.

Weinstein, 67, faces at least five years and up to 25 on the count of first-degree criminal sex act for his assault on Haleyi, and up to four years on a third-degree rape count for the Mann encounter. The judge can consider running the sentences consecutively, for a maximum of 29 years. Sentencing is scheduled for March 11.

After the verdict announcement, Weinstein was handcuffed and taken to jail, and his bail was revoked.

Weinstein's lawyers are expected to appeal the conviction on the basis of several concerns, including the amount of media attention on the case and the fact that the three supporting accusers were permitted to testify even though charges were not brought on their behalf. The appeal must be filed after sentencing.

The case is a landmark of the #MeToo movement, which has brought an avalanche of sexual assault and harassment allegations against powerful men and prompted conversations about gender and misconduct in all walks of life. The movement was jump-started after The New York Times and The New Yorker published allegations against Weinstein in late 2017.

The verdict "sends a powerful message of just how much progress has been made" since Weinstein's accusers came forward, said a statement from Time's Up, an organization advocating for harassment-free workplaces. "This trial - and the jury's decision today - marks a new era of justice, not just for the Silence Breakers, who spoke out at great personal risk, but for all survivors of harassment, abuse, and assault at work."

Tarana Burke, the original creator of the #MeToo movement, said in a statement: "Harvey Weinstein operated with impunity and without remorse for decades in Hollywood. Yet, it still took years, and millions of voices raised, for one man to be held accountable by the justice system."

She added: "This case reminds us that sexual violence thrives on unchecked power and privilege. The implications reverberate far beyond Hollywood and into the daily lives of all of us in the rest of the world."

After the verdict was read, Gloria Allred - who represents Haleyi, Sciorra and supporting witness Lauren Young - gave a news conference outside the courthouse, following a testy exchange with Weinstein's legal team over the spot in front of the microphones.

The prominent attorney called her clients "role models in courage" and said they "should be considered heroes for the women's movement."

"Women will not be silenced. They will speak up. They will have their voice," Allred later added. "They will stand up and be subjected to your small army of defense attorneys cross-examining them, attempting to discredit them, humiliate them, shame them, and they will still stand in their truth."

She continued, "So, Harvey Weinstein, this justice has been a long time coming, but it's finally here."

Allred said she hadn't spoken to her clients yet but had alerted them by email of the verdict. "I'm just proud of all of them," she said. "It was a difficult ordeal, but they did it. As they say, courage is contagious."

Weinstein lawyer Donna Rotunno told reporters, "He took it like a man. He knows this is not over. Harvey is strong. Obviously he is disappointed, but he is strong. He's mentally tough and we're going to fight."

The jury of seven men and five women heard about three weeks of testimony in New York State Supreme Court in Manhattan before beginning deliberations last Tuesday morning. They heard from six accusers: Mann, Haleyi, Sciorra and three others who were allowed as supporting witnesses. The prosecution brought a total of 28 witnesses, and the defense brought seven.

Mann, 34, had a five-year relationship with Weinstein but accused him of forcing sex on her twice - at a hotel in New York on March 18, 2013, which led to the conviction, and in Los Angeles, an incident that was not at issue in the trial. Haleyi, 42, accused Weinstein of forcing oral sex on her at his Manhattan apartment on July 10, 2006, and described having unwanted but consensual sex with him about two weeks later at a New York hotel (he was not charged for the latter).

Jurors saw emails between Mann and Weinstein suggesting a caring and affectionate relationship that lasted even after her assault. "[My mother] would love to meet you plus you could see how good my genes are," Mann wrote to Weinstein on July 29, 2014. In 2017 she told him: "I love you, I always do. But I hate feeling like a booty call. ;)" Haleyi also kept in touch with her abuser, as shown in email exhibits, asking about job opportunities and pitching TV scripts.

Relationships such as the ones Mann and Haleyi maintained with Weinstein were long considered by prosecutors to be major obstacles when it came to bringing charges. This conviction has the potential to reframe how law enforcement handles such cases.

Prosecutors argued that Weinstein's accusers felt overpowered professionally and physically, by his status in Hollywood and his 300-pound frame. Assistant District Attorney Joan Illuzzi-Orbon said in her closing arguments that Weinstein had "not only run roughshod over the dignity and, indeed, the lives of these witnesses, but that he also underestimated them."

Weinstein's attitude was that "they want to be in the universe [and] the universe is run by me and they don't get to complain when they're stepped on or demoralized and raped and abused," the prosecutor argued.

Weinstein's lawyers argued that all sexual activity with the accusers was consensual.

Tarale Wulff, 43, one of the three accusers who testified as supporting witnesses, told The Washington Post that she got news of the verdict via text and, at first, could not bring herself to read it. "When I did finally read it, I sort of just went silent. I went numb for a second," she said.

Her own claim, from 2005, was too long ago to prosecute that particular charge. But Wulff, a model who met Weinstein when she was a cocktail server, said she could tell the jury was hearing her. "I actually looked at them and it felt like they were listening," Wullf said. "As intimidating as it was to be in that room, their listening, yes, gave me a little bit of comfort and a little bit of empowerment."

It's not yet clear why jurors dismissed Sciorra's claims and not others. The "Sopranos" actress testified that Weinstein forced intercourse and oral sex on her during an encounter at her Gramercy Park apartment. "I was punching him. I was kicking him. I was just trying to get him away from me, and he took my hands and put them over my head," Sciorra, 59, tearfully recounted. She described how her life unraveled in its aftermath, as she engaged in self-mutilation and alcohol abuse.

"I didn't want to have to talk about what happened. I disappeared. I began to paint the walls. I began to drink a lot. I began to cut myself," Sciorra testified.

Unlike Mann and Haleyi, she did not describe having consensual sex with Weinstein before or after the alleged assault. Although Sciorra's allegations were older than the others', her longtime friend Rosie Perez testified that Sciorra confided in her about the rape, though Sciorra didn't at first say it was Weinstein. Defense witness Paul Feldsher testified that he was also a friend of Sciorra's at the time and that she described doing a "crazy" thing with the celebrity producer, which Feldsher took to mean a consensual hookup. During deliberations, jurors asked for a rereading from Sciorra's cross-examination and from Perez's testimony.

"My testimony was painful but necessary," Sciorra said in a statement Monday, adding that she spoke "with the strength" of Weinstein's other alleged accusers "in my heart. While we hope for continued righteous outcomes that bring absolute justice, we can never regret breaking the silence. For in speaking truth to power we pave the way for a more just culture, free of the scourge of violence against women."

Manhattan District Attorney Cyrus Vance attended the trial almost daily. He has faced repeated accusations throughout his decade in office of backing down from sex crimes when influential men are accused.

"Rape is rape whether a survivor reports within an hour, within a year or, perhaps, never," Vance said at a news conference after the verdict. "It's rape despite the complicated dynamics of power and consent after an assault. It's rape even if there is no physical evidence and even if it happened a long time ago. This is the new landscape for survivors of sexual assault."

He added, "Weinstein is a vicious serial sexual predator who used his power to threaten, rape, assault, trick, humiliate and silence his victims."

A number of women who accused Weinstein of sexual misconduct gave their reactions to the verdict in a conference call Monday afternoon. Rose McGowan, who accused Weinstein of raping her in 1997 and reportedly received a settlement that precluded legal action, said: "For once, he won't be sitting comfortably. For once, he will know what it's like to have power wrapped around his neck."

Mira Sorvino, who said Weinstein sexually harassed her while they were promoting the movie "Mighty Aphrodite," said, "The era of impunity for powerful men who rape people is over. We did this together."

Sorvino said that after her allegations were published in The New Yorker, she received a phone call from Sciorra, who revealed her own accusation. "We stayed on the phone for about two hours. And because of that conversation and further conversations, she decided to go public and ended up being one of those six women in New York who risked everything to do the right thing. Heroes, all."

Weinstein is also facing separate charges in Los Angeles. A spokesman for the Los Angeles County District Attorney's office declined to comment on whether it would seek Weinstein's immediate extradition.

Weinstein's lawyers are expected to appeal the bail bond revocation as early as Tuesday. During the trial, he was free on a $2 million bond and was required to wear an ankle monitor.

According to Rotunno, Weinstein is being sent to Rikers Island, the notorious New York jail that is slated to be shuttered after years of scandals and reports of abuse and mismanagement. Rotunno asked for him to be placed in a medical unit, and Justice James Burke agreed to recommend it. "He's under the care of five doctors currently. He's dealing with the remnants of his back operation, which was not successful. He's in need of the walker. He takes a list of different medicines," Rottuno said. "He's currently receiving shots in his eyes so he does not go blind."

Weinstein attorney Arthur Aidala said that at the defense table, soon after the verdict was read, Weinstein reacted by saying, "I'm innocent. How can this happen in America?" Before the verdict, the attorney asked Weinstein whether they could just have a lighthearted conversation. Aidala, whose firm has been on the case for about a year, said he had never asked the Hollywood magnate what his favorite movie is. Weinstein responded, "The Godfather."

Shortly after the verdict, a few blocks from the courthouse, jury foreman Bernard Cody walked down the street in a black leather jacket, black fedora, multicolored sunglasses and a pink, purple and gold bow tie. "It was exhausting," he told The Post. "The last day was - it was intense."