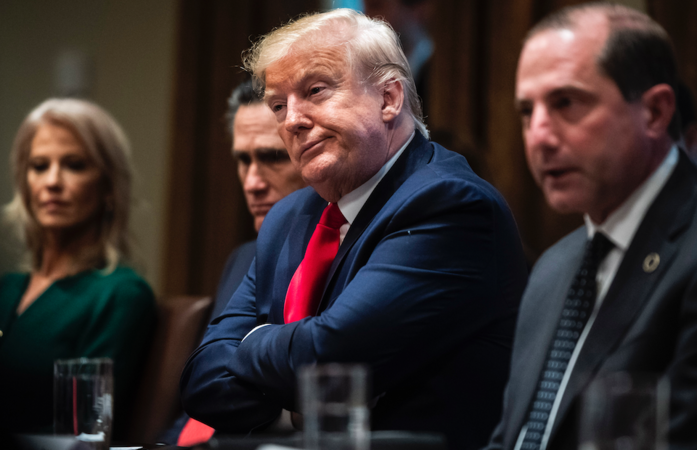 WASHINGTON - The White House late Monday asked Congress for $1.8 billion in emergency spending to respond to the coronavirus as the epidemic spread around the globe and sent shock waves through financial markets.

The request includes $1.25 billion in new funding for the Department of Health and Human Services, as well as the ability to transfer an additional $535 million set aside to fight Ebola and use it for the coronavirus response instead.

"To this point, no agency has been inhibited in response efforts due to resources or authorities. However, much is still unknown about this virus and the disease it causes," acting White House Office of Management and Budget director Russell Vought wrote to congressional leaders. "The administration believes additional federal resources are necessary to take steps to prepare for a potential worsening of the situation in the United States."

The request reflects the fast-evolving nature of the crisis confronting the administration, which until recently had insisted no additional funds were necessary.

But Democrats immediately slammed the request as too low, with House Appropriations Chairwoman Nita Lowey, D-N.Y., calling it "woefully insufficient to protect Americans" and criticizing the administration for trying to "raid" money from other public health accounts.

"House Democrats will move quickly to enact a robust package that fully addresses this global emergency without allowing this administration to steal from other necessary programs," Lowey said.

The request comes as federal agencies quickly burned through a $100 million fund and worked to transfer $136 million more from other accounts. Overall, the administration said in its request Monday that it intends to spend at least $2.5 billion all told to respond to the coronavirus, counting existing funds and transfers from other accounts.

The new funding would be spent on all aspects of response to the virus, including lab tests and quarantine costs; vaccine research and development; public health preparedness; and support for affected states.

The White House released the request at the end of a day when the Dow Jones industrial average plunged more than 1,000 points as worldwide fears set in that the coronavirus could last much longer than initially thought. Large parts of China's economy have effectively shut down because of the outbreak, and the virus has spread to more than two dozen other countries, with new cases in South Korea and Italy popping up over the weekend.

The number of cases of coronavirus in the United States now stands at nearly five dozen, a figure that greatly increased when infected passengers were brought back from the Diamond Princess cruise ship, docked in Japan. The federal government has had to scramble in recent weeks to adjust, and the White House's coronavirus response has been uneven, with President Donald Trump recently expressing anger that he was not involved in more decisions. While traveling in India on Monday, Trump declared on Twitter that the coronavirus is "very much under control" in the U.S. and that the stock market was looking good.

White House officials initially said they had little concern about the effect of the coronavirus on the United States, but that stance has changed markedly in recent weeks. They have instituted quarantines of certain people and are blocking many foreign-born people trying to enter the United States.

Senior White House officials, alarmed by gaps in the U.S. supply chain for responding to the coronavirus, have also begun studying potential measures to improve America's capacity for producing drugs and necessary medical equipment. Earlier this month, amid the accelerating outbreak, a team of White House officials traveled to the Virginia Biotechnology Research Park in Richmond for a tour of a facility piloting the production of generic pharmaceuticals.

The administration is looking at potential unilateral actions to strengthen "Buy American" provisions that would require federal agencies such as the Department of Health and Human Services, the Department of Defense, and the Department of Veterans Affairs to buy drugs and other medical equipment from facilities in the United States. White House officials are also interested in accelerating the production of "advanced" pharmaceuticals, though exactly how they would do so is not clear.

The administration's response to the coronavirus is led by a task force helmed by HHS Secretary Alex Azar and national security adviser Robert O'Brien. Some senior White House officials are wary of relying too heavily on producers abroad to ensure America has enough medical and pharmaceutical supplies to respond to the outbreak should it accelerate in the United States.

"If we have learned anything from the coronavirus and swine flu H1N1 epidemic of 2009, it is that we cannot necessarily depend on other countries, even close allies, to supply us with needed items, from face masks to vaccines," said Peter Navarro, a senior White House adviser on trade and manufacturing policy.

"Today, as the coronavirus situation underscores, too many of our supply chains for essential medicines and medical countermeasures are offshore."

With no vaccines likely to be ready in the next several months, it will be up to public health agencies to identify, quarantine and monitor people at high and medium risk for developing covid-19, the disease caused by the coronavirus; isolate and test those with symptoms; and quickly identify potential cases.

Among the immediate needs that states need funding for:

- Outreach to the general public

In a letter to Trump, the groups said that while it is too early to reliably predict the additional cost burden and supplemental needs of the coronavirus response, the administration needed to act quickly so sufficient funds can be appropriated to "stay "ahead of the curve" and perhaps pursue a strategy to "enact multiple appropriations on an as-needed basis as the situation unfolds."