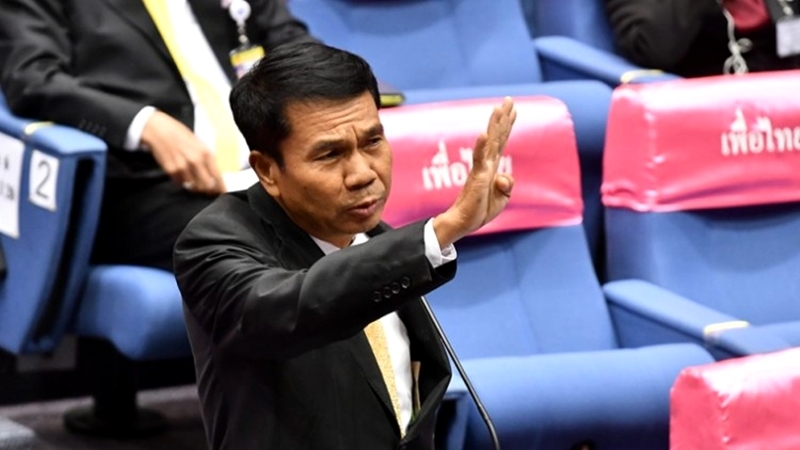 The government’s policies are destined to widen the social gap and slow the economy further, resulting in zero exports and higher household debt amounting to 80 per cent of gross domestic product (GDP), the second-highest in the world, opposition whip Sutin Klungsang said on Wednesday (February 24).

Speaking on the first day of the censure debate, Sutin said the economy was stalled and the Legal Execution Department’s boast that asset seizures in criminal cases were at a five-year high had negligible effect on GDP.

Without mentioning a source, Sutin said the failure to solve economic issues had been attributed to a prime minister who was shunned by other world leaders because he had seized power by force in 2014.

In recent years, 70 per cent of GDP has come from overseas in the form of tourism and investment, but Thailand is now losing that income because foreigners have lost confidence in the premier, he said.

Exports are contracting and some businesses are shutting down and the Bt3.2-trillion budget for fiscal 2020 was long delayed, resulting in a negative effect on the stock market.

Sutin said the government blames global trade disputes and other factors, but the problems were spawned by the prime minister himself, he insisted, noting how the government is a proud supporter of capitalism.

By way of evidence, he said large corporations command 95 per cent of all business income, leaving the balance as crumbs for small-scale companies, and they always get pride of place on government task forces established to shape Thailand’s future direction.