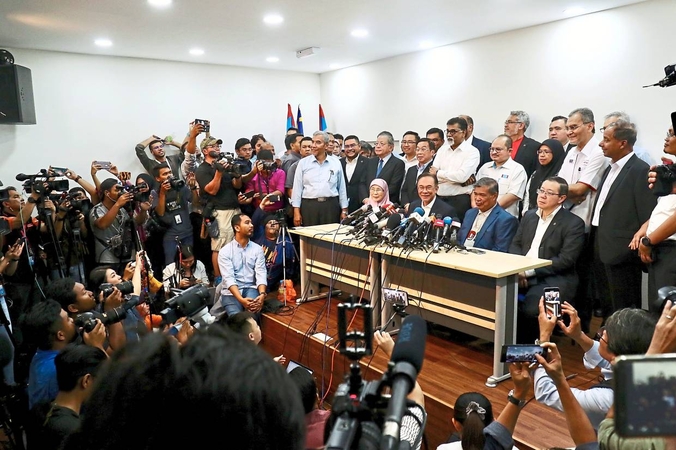 Anwar said Dr Mahathir was invited to chair the meeting to revive the Pakatan coalition after the defection of Parti Pribumi Bersatu Malaysia from Pakatan, which was followed by Dr Mahathir’s resignation as the Prime Minister and Bersatu chairman.

“Pakatan does not agree with any effort to form a government through the back door.

“Due to such an attempt to form a ‘backdoor government’, Dr Mahathir has resigned as the Prime Minister.

“The decision by Bersatu to leave Pakatan last Monday was followed by the resignation of Dr Mahathir as Bersatu chairman.

“The presidential council then decided that the candidate for the Pakatan prime minister is Anwar Ibrahim, ” said Anwar who read out a prepared statement during a press conference at the PKR headquarters here yesterday.

Anwar also said that the Pakatan coalition was committed to the mandate given to it in the last general election.

“It is on this premise Pakatan was formed, mandated by the rakyat and trusted to be the government, ” he said.

He insisted that the issue of the number of MPs supporting him for the Prime Minister’s post should be left to the discretion of the Yang di-Pertuan Agong, stating that it was improper and impolite to speculate on the matter.

“On the issue of numbers, we have left it to the discretion of the Yang di-Pertuan Agong. We attended an audience with the King at the Palace.

“Now all further actions must be stopped, ” he said, adding that everyone should wait for a decision.

He said the decision made by the King should be respected by all parties and the people.

“Let me reiterate, we must respect our Yang di-Pertuan Agong’s wisdom, discretion and decision in accordance with the laws and the Constitution, ” he said.

Earlier, during a press conference at his house in Segambut, Anwar said the statutory declarations signed in support of Dr Mahathir as prime minister for the full term prior to the collapse of the Federal Government were now irrelevant.

He explained that the decision of the Yang di-Pertuan Agong would now be based on the interviews made by the King with the MPs during the past two days.

“Numbers is the prerogative of the King. We are not playing with numbers, ” said Anwar.