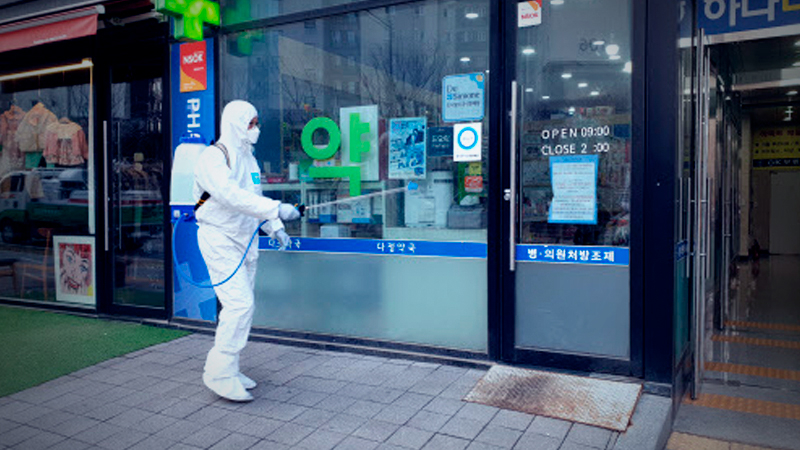 South Korea reported another daily spike in the number of new infections of the new coronavirus on Thursday, and more additional cases may be identified in the hardest-hit city of Daegu and its neighboring regions as virus tests started on more than 210,000 members of a religious sect at the center of the rapid spread.

The whopping 334 new cases took the nation's total infections to 1,595, according to the Korea Centers for Disease Control and Prevention.

A 74-year-old virus patient who is tied to the religious sect in Daegu died of respiratory failure earlier Thursday, bringing the nation's death toll to 13.

More than half of newly confirmed cases came from a branch of a religious sect in the southeastern city of Daegu.

Of the 334 new cases, 307 are in Daegu, 300 kilometers southeast of Seoul, and four are in neighboring North Gyeongsang Province. The number of total infections in Daegu and North Gyeongsang stood at 1,017 and 321, respectively.

Other major provinces and cities have also reported some infections, with Seoul reporting another six cases, the KCDC said in a statement.

In an alarming sign that the novel coronavirus is spreading more widely in South Korea, the total number of cases in the capital of Seoul and Busan, the second-largest city, rose to 55 and 58, respectively.

Experts said the number of confirmed cases is expected to jump in the coming days as health authorities began testing more than 210,000 members of the Shincheonji Church of Jesus at the center of the rapid spread in other provinces.

South Korea confirmed its first new coronavirus case from a Chinese woman from Wuhan, the epicenter of the virus outbreak, on Jan. 20, but the pace of infections had not been alarming until Feb. 18, when a 61-year-old woman who is tied to the Daegu branch of Shincheonji tested positive for the virus.

Vice Health Minister Kim Gang-lip said in a daily briefing that authorities are expected to complete virus tests on Shincheonji members in Daegu within two or three days. Tests on about 1,300 Shincheonji members who have shown symptoms have been completed, Kim said.

A total of 114 people, including 10 medical workers, have been diagnosed with the virus at Daenam Hospital in Cheongdo, just south of Daegu. More than half of the fatalities in the country are related to the hospital, where most patients have mental illnesses.

Kim said the government will transfer 60 patients at the hospital to another hospital in Seoul for better treatment.

Despite an alarming surge in confirmed cases in recent days, the government again said it has no plan to expand entry bans on foreign nationals from China's other provinces.

A petition calling for President Moon to expand entry bans to China's other provinces has exceeded 700,000.

Separately, the religious sect said 833 out of its 1,848 members who got tests in Daegu were confirmed to have been infected with the virus as of Wednesday. The remaining 7,446 members in Daegu were waiting for tests, it said.

With the virus outbreak worsening, the U.S. State Department urged Americans not to travel to South Korea. U.S. President Donald Trump said that it's not the right time to put additional travel restrictions on South Korea, but Washington could do so "at a right time."

In a joint statement on Thursday, the South Korean and US militaries said they have delayed annual joint military drills on the Korean Peninsula over the virus outbreak.

Despite concerns that the Korean economy will take a harder hit from the virus, the Bank of Korea kept its key rate unchanged but expanded its special loan programs by 5 trillion won ($4.1 billion) to 30 trillion won to boost liquidity.

The number of people being checked for the virus and under quarantine came to 21,097, it added. The country has tested a total of 56,395 suspected cases, with 35,298 testing negative. (Yonhap)