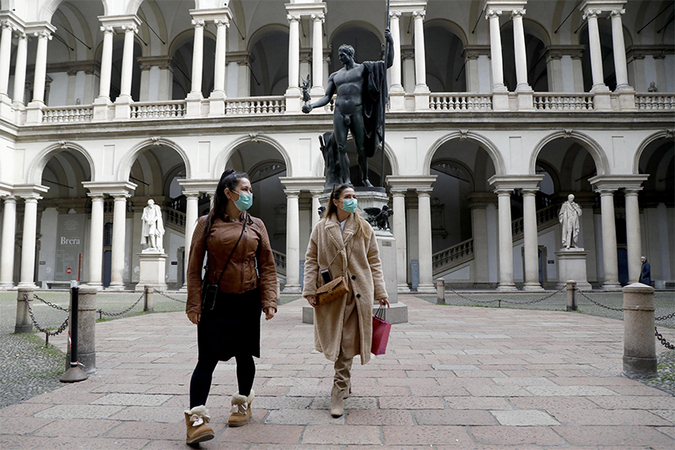 Some U.S. universities are ordering students to leave Italy, one of the most popular study-abroad destinations, and discouraging travel to South Korea as the novel coronavirus spreads.

With a rapidly evolving outbreak, university officials accustomed to planning months ahead have had to move quickly to protect students, faculty and staff on campuses that have become increasingly global.

The uncertainty affects thousands of students: More than 340,000 students from the United States studied overseas in the 2017-2018 academic year, according to the Institute of International Education's Open Doors survey.

Many programs in China were suspended last month amid the outbreak. But the arrival of coronavirus in Italy and elsewhere in Europe took the disruption to another level.

American students overwhelmingly choose Western Europe for study abroad, said Brad Farnsworth, vice president for global engagement at the American Council on Education, a higher education group. "When you talk about the cancellation of programs in Europe, the scale is so much greater," he said.

Italy is a leading destination, with nearly 37,000 students from U.S. schools enrolled in programs there in the 2017-2018 academic year. Only the United Kingdom drew more students from the United States.

Florida International University canceled spring study-abroad programs in Italy, Singapore, Japan and South Korea on Tuesday and directed people in those countries on university-related business to return to the United States immediately.

Stanford University suspended its study program in Florence, with in-person instruction ending Wednesday, and plans to begin digital coursework from the United States in March. The university has not made a decision about the spring quarter. The decision to have students come home early was made largely to avoid possible travel restrictions, a university spokesman said.

New York University's president echoed that concern in a message to campus announcing the suspension of operations at its Florence campus Thursday. The 300 students taking classes there will return home and take online classes until at least late March.

NYU spokesman John Beckman said a sharp uptick in cases and the speed with which Italian authorities decided to quarantine towns spurred the decision.

University officials are hoping to minimize complications for students upon their return. One student went home to Israel, said Josh Taylor, associate vice chancellor for global programs and mobility services at NYU. That student must remain in isolation for 14 days.

NYU officials will reassess the situation in several weeks and determine if students can return to Italy, Taylor said.

The considerations for school officials are complex, said Frederick Lawrence, secretary and chief executive officer of the Phi Beta Kappa Society and a member of the Georgetown Law faculty.

Once students return, another problem emerges, said Lawrence, who is also a former president of Brandeis University: "What do you do with them?" Many schools have limited housing, he said, so finding places for students to stay may be difficult. Academically, the questions are complicated as well. Halting studies isn't ideal, but neither is quickly forcing classes into a digital format. The experience of living and studying abroad "cannot remotely be replicated in an online platform," he said. There will be lost revenue, in many cases.

South Korea and Italy have the most confirmed cases of infection outside China, where the virus was first reported.

On Wednesday, Janet Napolitano, president of the University of California, issued a directive to the UC system to avoid nonessential travel to South Korea, and to return if already there.

The University of Wisconsin at Madison suspended study-abroad programs in South Korea on Wednesday, as did American University.

The Centers for Disease Control and Prevention urged people to avoid nonessential travel to China and South Korea, and issued alerts about travel to Italy, Japan and Iran.

Most universities responded quickly to the threat in China - even, in the case of Duke Kunshan University and NYU Shanghai, re-creating the curriculum online in just weeks.

But as the situation continues to change and infections spread, school officials have faced continuing uncertainty.

"There's no question that this is significant and it will have various kinds of ripple effects not just over the next week but probably over the next several months," said Michael Schoenfeld, a spokesman for Duke University, where students who had been studying in Italy were on their way back to the United States on Wednesday. Summer study programs in China have been canceled. Online classes at the school's campus in China began Monday.