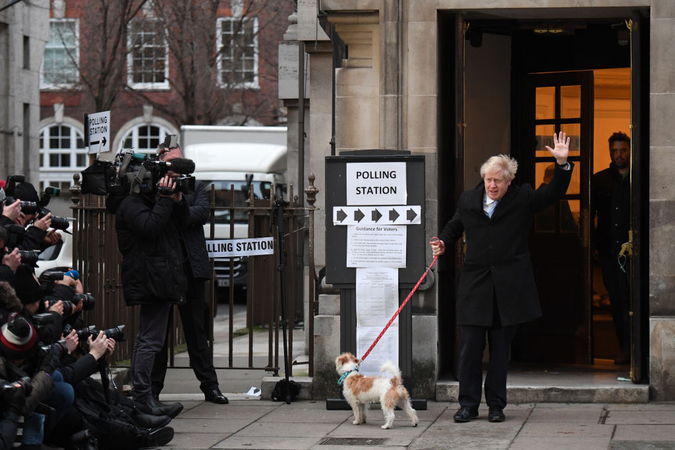 LONDON - Just days before formal trade negotiations are to begin, Prime Minister Boris Johnson on Thursday threatened that Britain would walk away from talks with the European Union in June if its demands for full control over its own rules and laws are not met.

Trade talks between two of the world's top economies are set to start Monday in Brussels, with ten teams and 200 negotiators huddling in conference rooms, trying to ink a deal on a vast range of topics, from the trade of goods and services, to environmental protections, security, intellectual property, fisheries, worker's rights and aviation safety.

Earlier this week, European ministers agreed on their goals for the talks, and Britain on Thursday announced its own mandate. And it is clear the two visions clash.

The European Union is demanding that Britain closely follow E.U. rules to maintain high standards, now and in the future, if it wants to continue to have tariff-free, quota-free access to the continental bloc, with its 450 million consumers.

For his part, Johnson has warned Europe that Britain did not go through the long agony of Brexit just to end up following Brussels diktats.

Complicating matters, Britain also wants to launch into trade talks with the United States this spring - as the U.S. presidential election goes into overdrive and the coronavirus threatens global economies.

Johnson insists Britain wants a relationship with Europe based on the "friendly cooperation between sovereign equals." Britain "will not negotiate any arrangement in which the U.K. does not have control of its own law" and will not be subject to any "E.U. institutions, including the court of justice."

Johnson said Britain wants a free trade deal like the one previously struck between the European Union and "friendly" nations such as Canada, Japan and South Korea.

But European leaders have told Johnson that Britain is not like Canada.

E.U. chief negotiator Michel Barnier said earlier this week that geography matters for trade deals, as the British port of Dover is only 21 miles away from the French port of Calais.

Because of the close geographical proximity between Britain and the continent - and because the two entities are already so closely interlinked - the E.U. wants Britain to guarantee that a "level playing field" between the sides will be maintained.

This means that Europe does not want Britain to gain any unfair advantage by weakening safety regulations, cutting environmental safeguards, rewriting labor laws - or deploying outsized state subsidies - that would help its companies outbid European competitors.

Johnson said Thursday that Britain could guarantee overall top quality for goods, without following every new regulation issued by Brussels.

"We're not going to engage in some race to the bottom," the prime minister said. "All we want is mutual recognition of each other's high standards, and access to each other's markets."

Johnson said Britain wouldn't demand that the E.U. follow every change in U.K. legislation. "So it doesn't make any sense for them to make the same requirement of us, and that's where we are," he said.

Johnson has blinked in talks with Europe before, over the what to about the Irish border, but his government insisted Thursday that maintaining full sovereignty was nonnegotiable.

Britain will either sign a free-trade deal with the E.U. by December, or it will leave with no deal, and trade with Europe as a third country, such as Australia, relying on World Trade Organization terms.

Such a hard exit could see the imposition of all sorts of new trade barriers, including customs duties and inspections for food safety.

Government economists in 2018 forecast that a Canada-style deal could reduce Britain's economic growth over the next 15 years by 5 percent, while a deal similar to Australia's would cost Britain's 8 percent over the same time period.

If it is not clear by June that a deal to Britain's liking can be quickly concluded, "the government will need to decide whether the U.K.'s attention should move away from negotiations and focus solely on continuing domestic preparations to exit the transition period in an orderly fashion," the British mandate says.

The two sides, too, are likely to clash over access to British fishing waters, as any restrictions will endanger the business model of European fishermen, who catch up to half of their fish in British territory.

The other main worry for Europeans is the lack of preparations by the United Kingdom to manage customs and sanitary checks for goods between Great Britain and Northern Ireland, which, according to the Brexit withdrawal deal, is supposed to remain aligned with E.U. regulations.

Johnson maintains that Britain will not be doing any such checks and that new no infrastructure is needed.

"We know the situation is fragile and peace is fragile," Barnier said. "We know this protocol is complex. I'm not going to be over-impressed by rumors and talks. But what I'm interested in is what the British government will actually do."