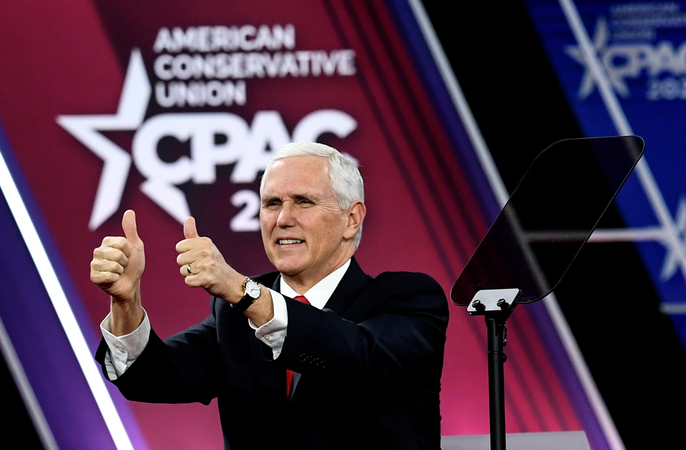 NATIONAL HARBOR, Md. - The Conservative Political Action Conference began on Ash Wednesday in a reelection year with a quiet service on the shore of the Potomac River. Wearing Trump bumper stickers on their church hats or gold-colored "Trump 2020" pins on their collars, the faithful approached an altar branded with the logo of the Gaylord National Resort & Convention Center. A priest dabbed their foreheads with the mark of the cross and urged them to emulate Jesus. "Act like him, think like him,

"The best part about that," she promised, "is we get to see more liberal tears."

Since a pre-presidential Ronald Reagan helped inaugurate the annual gathering half a century ago, CPAC has become a sort of political pilgrimage for conservatives, an almost sacred event that has hosted some of the movement's important addresses and politicians. Since Trump's election four years ago, the conference has functioned in election years as the first revving of the Republican engine, priming the messaging and activist networks that will shortly flood the country. And this year was no different, even if the particular messaging strike an apocalyptic note.

As the self-described democratic socialist Bernie Sanders takes the lead in early Democratic primaries and caucuses, CPAC's message for 2020 is "America vs. Socialism." The slogan was written on posters across the Gaylord and absorbed in the fashions of attendees who lined up for hours outside the ballroom to register: college students in "Kiss Me I'm a Capitalist" T-shirts, a woman in four-inch star-spangled heels, men in suits and tennis shoes, dogs in tiny faux combat jackets.

And this advance guard for Trump's reelection was nothing if not confident.

"Trump's going to win in a landslide," said Robert Rappaport, a 77-year-old retired engineer from Naples, Florida, whose conservative philosophy was rooted in the writings of Friedrich Hayek and the Bible, and expressed on his T-shirt: "Deplorable Lives Matter."

CPAC traditionally saves its best material for last, culminating on Saturday with a scheduled appearance by Trump. But Rappaport and about 800 other people showed up early and stayed late on the conference's first day for "direct action training," a preview of the strategies Republicans will need to get one of the most nationally unpopular presidents in modern history reelected.

The session's titles sometimes promised more drama than the speakers delivered. "Weaponize Social Media" turned out to be a slide-show tutorial on how to share fundraising links with your friends. "The Fate of Our Culture and Our Nation Hangs in the Balance" was headlined by Rep. Dan Crenshaw, R-Texas, who entertained the existence of "well-intentioned liberals," but they end up being socialists anyway.

"They're pushing some of the most radical policies this country has ever seen," Crenshaw said. "How did we get to a point where Bernie Sanders is the thought leader of a major Democratic Party?"

Gigantic TV screens entertained the crowd between sessions, blasting Trump quotes and cable news clips at such volume that one attendee's service dog began to bark in alarm. As Wednesday evening wound down, Mercedes Schlapp - a Trump campaign official who is married to Matt Schlapp, chairman of the American Conservative Union which runs CPAC - offered this advice on recruiting undecided voters to the cause: "Tell them it is no longer your grandfather's Democratic Party."

When the attendees returned Thursday morning, they were greeted by a newly erected barricade of metal detectors and Secret Service officers. CPAC's first major speaker, Vice President Mike Pence, would arrive around noon.

Relatively minor conservative celebrities floated around the camera-lined hallways in the interim. Rep. Douglas Collins, R-Ga., fresh off his role defending Trump against impeachment charges, was mobbed at nearly every TV or radio booth he walked past. Scott Jenkins, the second-amendment-loving sheriff of Culpeper County, Virginia, paraded in uniform with a much smaller entourage.

Matt Schlapp paused to add his signature to a fan's 10-year-old traveling T-shirt, which already bore the marks of Andrew Breitbart and Joe the Plumber. Ronald Solomon, proprietor of TheMAGAMall.com, schmoozed the crowd and predicted an easy reelection for the president. "I've never sold more hats," he noted.

An informal sampling of college Republicans, who had traveled here from schools across the country, yielded a more sober assessment of Trump's chances.

"I think it will be tight," said Olivia Higgins, a freshman at Carthage College in Kenosha, Wisconsin. "A lot of my peers, even most, are very liberal."

Still, she emerged beaming from the massive auditorium where she and several thousand others watched Pence declare that the Democratic primary contest will end when "a monster truck with a big T on the hood drives into the infield and runs right over them."

The crowd inside readily burst into applause and chants - especially when a Trump impersonator in an oversized suit and copious face makeup tried to interrupt the speech, only to be marched outside and down the corridor by half a dozen security officers.

In the same hallway, a self-described anti-fascist demonstrator who had purchased a ticket was arguing at the top of his lungs with associates of far-right, social media personality Laura Loomer.

"Isn't this interesting? It's a microcosm!" marveled John Folsom as he watched the spectacle. A political "agnostic", Folsom said he had come to CPAC to do outreach for a veteran's support group in Omaha "That's what I like about America," he said. "You've got a free exchange of ideas, you've got two people who obviously don't agree with each other. It's an argument, not a discussion."

Inside the auditorium, the arguments tended to veer one-sided. Trump relatives Ivanka, Lara and Donald Jr. graced CPAC's stage on Friday, praising their boss and patriarch's administration as effusively as Trump will likely do himself when he takes the stage this weekend.

"My father-in law was probably like so many people in his room, so frustrated by what he saw happening to his country, and the wasteful spending," said, Lara Trump, the president's daughter-in-law and a campaign adviser. "I don't know if anyone remembers the shrimp on the treadmill," she added, referring to a federally funded study on water quality that enraged some conservatives in 2011.

In a panel on big technology, the president's son Donald Trump Jr., a campaign surrogate, complained that Trump fundraising emails were going into his junk mail, which suspected was a plot by computer programmers to try to steal the election.

"They are going to cheat. They will," said campaign manager Brad Parscale, echoing a similar sentiment to Don but directing his ire at Democrats. "What it's going to be is all of you standing up, doing something and fighting. ... That's what's going to keep this movement alive, that's what's going to get this president four more years."