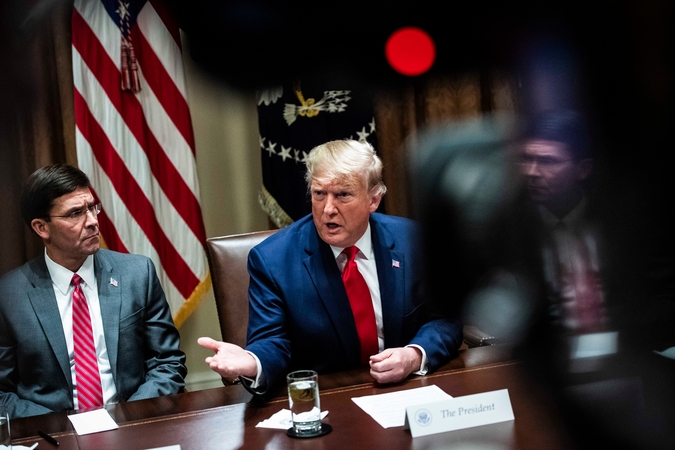 WASHINGTON - The Trump administration on Friday sought to beat back criticism of its handling of the response to the deadly coronavirus, as President Donald Trump and his aides played down the threat it poses and said Democrats and the media were overhyping the dangers of the outbreak.

Trump adopted an optimistic tone as he headed to a political rally Friday evening in South Carolina, despite another bad day for financial markets and troubling news about the virus's spread abroad and in the United States.

He also complained that Democrats have politicized the process and that he has not received enough credit for restricting flights from China soon after the outbreak began earlier this month.

"Some of the Democrats are doing it the way it should be but some of them are trying to gain political favor by saying a lot about this," he told reporters. "The fact is, I made one decision that was a very important decision, and that was to close our country to a certain area of the world that was relatively heavily infected."

Trump's remarks followed similar messages from his top aides earlier in the day as they went on the offensive against perceived political opponents and portrayed the situation as better than it appears.

Acting chief of staff Mick Mulvaney told a conservative conference that the media ignored the administration's early planning efforts because they were focused on Trump's impeachment trial even as he acknowledged the public health scare could lead to school closures and other disruptions.

National Economic Council Director Larry Kudlow continued to downplay the risks the outbreak poses to the economy and portrayed the massive market sell off as an overreaction by investors.

"I just think everybody, whether you're an investor or whether you're an ordinary mainstream person, people should not overreact," Kudlow told reporters. "The president has taken rapid-fire unprecedented actions to help protect in the event of an emergency or further deterioration."

Despite the administration's message, Friday brought more news about the spread of the virus both abroad and at home.

A 65-year-old resident of Santa Clara County, California, who has no known history of travel to countries hit hard by the outbreak, has tested positive for coronavirus, people familiar with the case said Friday. There is no known connection between the new patient and anyone else diagnosed with the disease, known as covid-19. On Wednesday, health authorities revealed the nation's first case of community transmission, a woman in Solano County, about 90 miles away.

The World Health Organization raised its risk assessment of the coronavirus to "very high" Friday and Japan declared a state of emergency on the northern island of Hokkaido and told residents to stay indoors as the country reported its 10th death. France and Germany reported upticks in infections while South Korea's tally surpassed 2,300, as more events were canceled and airlines said they would cut flights. A bright spot was news that there were indications that the outbreak may be slowing in China.

The escalating outbreak drove stocks to their worst weekly loss since the 2008 financial crisis and prompted the Federal Reserve to take the unusual step of issuing a statement to reassure Americans.

The Dow Jones industrial average fell another 357 points Friday, ending its week-long precipitous fall. The index has shed more than 4,100 points, or 14 percent, in less than three weeks, with much of the carnage coming in the past five days.

"It's the unknown, you know, they look at it and they say how long will this last," Trump said of investors' worries before directing an unfounded shot at the candidates running to replace him in this year's election. "I think they're not very happy with the Democrat candidates when they see them and I think that has an impact."

Trump also continued to liken the new virus to the flu, something public health experts have warned is not a helpful comparison.

"And, as you know, with the flu, on average, we lose from 26,000 to 78,000 people a year - even more than that, in some cases, some years. We haven't lost anybody yet," he told reporters. "And hopefully, we can keep that intact. We - there have been no deaths in the United States at all."

Senior administration officials tried to project an image of vigilance and preparedness on Friday as they briefed reporters on the federal government's latest efforts to contain the virus and expeditiously secure additional funding from Congress.

"Thanks to the president's aggressive containment efforts, at this time the risk from covid-19 to the American public is low," Health and Human Services Secretary Alex Azar said. "But as we have all repeatedly emphasized, that has the potential to change."

Eric Ueland, the White House's chief liaison to Capitol Hill, detailed the numerous briefings about the virus that the administration has provided to lawmakers, including conversations with more than 200 congressional offices that began in early January. He said he expected an emergency funding package to clear Congress as early as next week, with the goal of Trump signing the additional money into law before lawmakers leave for their mid-March recess.

Lawmakers and aides said they intend to work through the weekend to get agreement on the emergency spending bill. A vote in the House could come as soon as next week.

Negotiators are circling around a $6 billion to $8 billion commitment, with some officials involved saying they anticipate ending up at the higher end of that range. The final figure will dwarf the $2.5 billion spending plan the White House proposed earlier this week. Also, the White House plan included only $1.25 billion in new funding, while taking more than $500 million from an Ebola response fund and other sums from the National Institutes of Health and elsewhere. The congressional spending bill is expected to be all new money.

Democratic lawmakers described frustration with the administration's response to the outbreak, particularly as lawmakers face questions from constituents and medical professionals at home about issues such as a lack of testing kits. Democrats expressed skepticism that they are getting straight answers and criticized Vice President Mike Pence, who was put in charge of the administration's response Wednesday night, for heading to Florida Friday for a fundraiser.

"We need our public health experts in charge of this response and we need to make sure it's not someone who's just going to further the president's political interests," Rep. Debbie Wasserman Schultz, D-Fla., told reporters Friday after a closed-door virus briefing from administration officials. "They're considering this so urgent they put someone in charge of it that is in my state for a fundraiser rather than sitting down with our public health officials."

Some Republicans, too, said they wanted more information.

"Well look, there's a lot of unknowns that are out there and frustration that members have from what they see in their districts," said Rep. Fred Upton, R-Mich., He mentioned a high school in Washington State that's been closed for two days and the first case of apparent community transmission in California, at the same time lawmakers take in alarming reports from abroad.

"We need answers to those questions and I think everybody is scrambling for information," he said.

Democrats have also been critical of Pence's decision to have agencies clear media appearances through his office, raising the specter that he is trying to suppress information that could be politically damaging to the president. His aides, however, said it is being done to make sure a consistent message is being communicated to the public.

Anthony Fauci, a key leader in the Trump administration's response efforts, told members of Congress on Friday that he was not being "gagged" or "muzzled" in what he can say about the epidemic.

However, Fauci said he had to cancel some planned Sunday television appearances after Pence was named to lead the coronavirus response.

Fauci, director of the National Institute of Allergy and Infectious Diseases, told a briefing House members that the change was necessary because such appearances must always be cleared, and the clearance process restarted after Pence was named Wednesday to head the response.

"Look, he said to everybody: 'I am not being muzzled. I want to clear that up,'" Rep. Mark Takano, D-Calif., said, recounting the exchange. "But that when the vice president took over, he was already booked. They said: 'Look, stop. We want to just reevaluate everything. So don't go on those programs yet.' . . . It is a quote from him that 'I'm not being muzzled, and I want to explain what was going on.'"

Pence and Azar are now scheduled to appear on several of the Sunday news programs - not Fauci.

Despite members of both parties saying the response to the outbreak should be nonpartisan, the potential for a heightening of political tensions was evident Friday.

Trump's son and frequent campaign trail warm-up, Donald Trump Jr., said in a Fox News interview that Democrats and some media organizations are hoping for deaths from the virus because it would hurt Trump politically.

"For them to try to take a pandemic and seemingly hope that it comes here and kills millions of people so that they can end Donald Trump's streak of winning is a new level of sickness," Trump Jr. said.