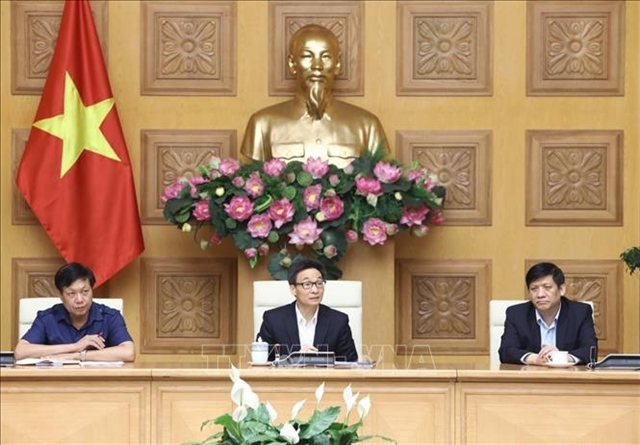 Deputy Prime Minister Vu Duc Dam this morning chaired a meeting of the Steering Committee for the prevention of acute respiratory infections caused by the new strain of coronavirus. — VNA/VNS Photo Van Diep

Hanoi — Amid soaring cases of the coronavirus infection in South Korea, the Vietnamese government mulls plan to suspend visa-free travel for South Koreans starting on Saturday.

The decision was announced at a meeting of the Steering Committee for the prevention of acute respiratory infections caused by the new strain of coronavirus (COVID-19) Friday morning.

The Vietnamese government informed the embassy of South Korea in Hanoi of plans to temporarily suspend a programme under which Koreans have been able to stay in the Southeast Asian country for up to 15 days without a visa.

Deputy Minister of Foreign Affairs To Anh Dung said Vietnam had achieved positive results in fighting COVID-19, but the epidemic has been developing unpredictably in many countries, including South Korea, Italy and Iran.

In order to prevent the disease from spreading in Vietnam, the Government has taken many measures to protect the health of people and communities, minimising negative impacts on the economy and society.

According to the latest decision, South Korean citizens entering Vietnam will have to obtain a suitable visa type issued by the country, starting from February 29.

A representative from the Ministry of Transport also said that in recent days, the number of flights between Vietnam and South Korea was declining sharply. Many domestic airlines are considering suspending flights until the situation is stabilised.

Also at the meeting, the Steering Committee members agreed to ask localities to organise a 14-day quarantine policy for Iranian and Italian citizens entering Vietnam.

Medical experts recommend that for flights from epidemic-affected areas to Vietnam, it was necessary to organise approaching suspected cases while on the aircraft and bring them to quarantine areas. Screening can be done later for specific quarantine requirements.

"We have been more proactive, but absolutely not ignorant," the Deputy Prime Minister said.

Starting earlier this week, everyone coming from South Korea to Vietnam is required to make health declarations, and those with symptoms like high fever, coughing and shortness of breathing will be placed in quarantine for a minimum of 14 days.

All flights from affected areas in South Korea will be diverted to smaller airports for better detection and quarantine control. Some South Koreans who refused to be quarantined were flown home.

On the same day, Deputy PM Vu Duc Dam met with representatives from the World Health Organisation (WHO) and the United States’ Centers for Disease Control and Prevention (CDC), where the latter praised Vietnam’s efforts in monitoring and controlling the epidemic.

Kidong Park, WHO Representative to Vietnam, said while controlling COVID-19 on a global scale is extremely difficult, the international community expects that Vietnam quickly shares its experience in the quarantine and treatment of suspected cases.

Mathew Moore, representative of the CDC, said the Vietnamese Government had acted promptly, aggressively and effectively.

The fact that Vietnam had only 16 confirmed cases of COVID-19, all of whom had recovered, showed the country’s successful efforts in coping with the epidemic, Moore said.

The coronavirus outbreak has infected more than 83,300 people in 54 countries and territories, according to official figures. As of Friday morning, at least 2,858 people have died, all but 66 in mainland China.

No new cases have been reported in Vietnam. The country is currently monitoring and quarantining 79 people. The total number of people who were in close contact with confirmed patients or from epidemic-affected areas being monitored is 4,939. — VNS