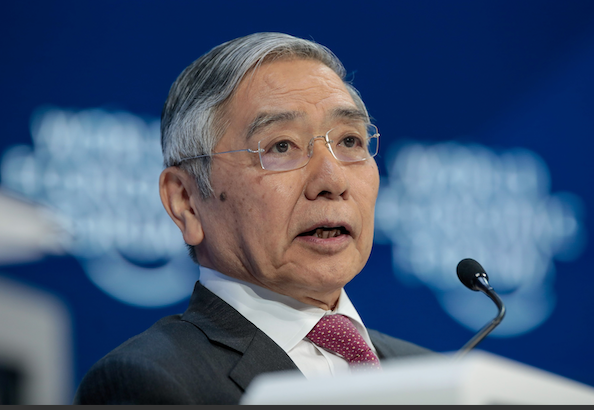 Haruhiko Kuroda, governor of the Bank of Japan, speaks during a panel session on the closing day of the World Economic Forum (WEF) in Davos, Switzerland, on Jan. 24, 2020. MUST CREDIT: Bloomberg photo by Jason Alden.

Global central banks promised to act as needed to stabilize markets rattled by the coronavirus as the OECD warned the world economy faces its "greatest danger" since the financial crisis more than a decade ago.

In an emergency statement, Governor Haruhiko Kuroda said the Bank of Japan will "strive to provide ample liquidity and ensure stability in financial markets." The Bank of England followed by saying it's working with U.K. and international authorities to "ensure all necessary steps are taken to protect financial and monetary stability."

Already on Friday, Federal Reserve Chairman Jerome Powell opened the door to cutting interest rates to contain what he called the "evolving risks" to economic growth from the virus. The Paris-based OECD now expects the weakest global growth this year since the 2009 recession, and said a "long lasting" epidemic would risk a worldwide recession.

Money markets now see the Fed lowering its main rate by 50 basis points this month, and give a 70% chance the European Central Bank will pare its by 10 basis points.

Economists at Goldman Sachs predicted the Fed will ultimately slash by 100 basis points in the first half of the year. The BOE will cut by 50 basis points and the ECB by 10 basis points, it said.

There is even speculation that the Fed will move before its policy makers gather on March 17-18, and some economists see the potential for international policy makers to coordinate cuts for the first time since 2008. Investors increasingly bet the central banks of Australia, Canada and Malaysia will ease at meetings already scheduled for this week.

"Global central bankers are intensely focused on the downside risks," Goldman Sachs economists led by Jan Hatzius said in a report on Sunday. "We suspect that they view the impact of a coordinated move on confidence as greater than the sum of the impacts of each individual move."

With interest rates already low, governments may also need to do more to support demand. The French government said on Monday that Group of Seven finance ministers will hold a conference call this week to coordinate their response. Italy is already seeking to widen its budget deficit to pay for at least 3.6 billion euros ($4 billion) in proposed emergency economic measure

Just a week ago, key central bankers were saying it was too soon to respond to the outbreak, a reticence to act that may also reflect their reluctance to be seen as racing to rescue investors. The plunge in global stocks is forcing a change in stance.

"Central banks will almost certainly all induce one form of easing or another, " said Vishnu Varathan, head of economics and strategy at Mizuho Bank Ltd. in Singapore.

The Bank of Japan backed up Monday's promise to help markets by offering to buy 500 billion yen ($4.6 billion) of government bonds to provide liquidity. Indonesia's central bank lowered the amount lenders need to keep on reserve to shore up liquidity in its markets.

By not alluding to monetary policy as Powell did, Japan's statement revealed the constraints the BOJ and many other central banks are under. Japan's key rate is already minus 0.1% compared to the Fed's 1.5% to 1.75% range.

The ECB, which hasn't so far published a statement, is also limited by a deposit rate of minus 0.5%. Prior to the outbreak, policy makers were signaling a reluctance to reduce it even further given concern that banks, who are already seeing profit margins squeezed by negative rates, might pull back on lending.

"The main front line of response has to be fiscal policy," he said at a conference in London. "When you have a problem you can't always look at central banks. We are not almighty."

His colleague, Bank of France Governor Francois Villeroy de Galhau, said on BFM Business television that "we are vigilant, we are mobilized, but we remain calm and proportional in the responses we need."

Even before the latest crisis, economists were questioning the benefits of ultra-loose monetary policies given more than 700 interest-rate cuts and several rounds of bond-buying since the financial crisis. They boosted asset prices, but failed to generate substantial rebounds in economic growth.

For central bankers, whose prior stimulus moves have already greatly depleted their ammunition, the new challenge is that easier policy may be even less effective to combat the economic pain posed by a health emergency.

That's because by shutting workplaces in China and increasingly abroad, the virus is dealing a blow to the world's capacity to produce goods. Lower rates won't help manufacturers whose factories are closed or which lack materials to make their own products. On the demand-side, they would likely also fail to spur consumers to shop or travel if they're worried about infection.

But easier monetary policies should counter tighter financial conditions, support markets and maintain the supply of credit, thus helping to drive a rebound in demand once the virus is under control. Weak inflation also gives most central banks scope to act.

"Rate cuts are not the silver bullet, although they can support markets somewhat," said Jerome Jean Haegeli, chief economist at the Swiss Re Institute in Zurich.

Governments will likely have to help too. Economists at Morgan Stanley predict the combined fiscal deficit of the four largest advanced economies plus China will now run to at least 4.7% of global gross domestic product this year, the biggest since 2011.