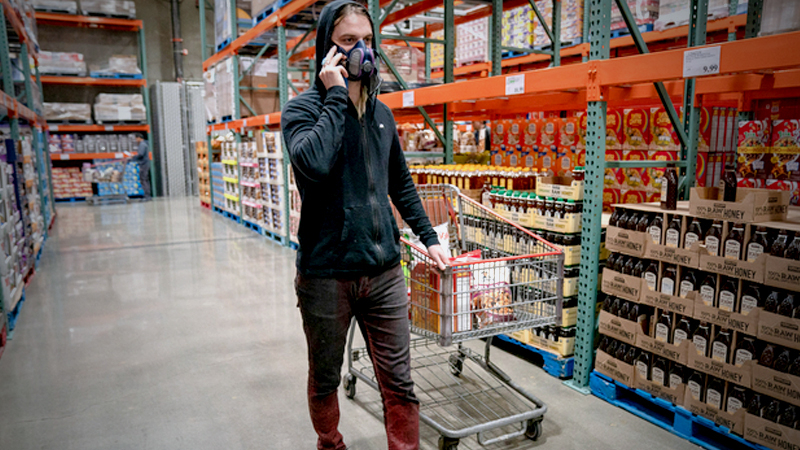 The novel coronavirus continued its march around the globe Monday, despite travel restrictions aimed at curtailing its spread, but hopes of a coordinated monetary response by central banks lifted world markets following last week's heavy losses.

As the global death toll passed 3,000, South Korea said Monday it has confirmed 599 new cases, far higher than the daily tally reported in China. With 4,335 confirmed infections and at least 22 deaths, South Korea has the second-largest national caseload. However, it has tested more than 100,000 people, far more than most nations.

In the United States, where two deaths were reported over the weekend, tests have taken place at a far slower pace. A genetic analysis has suggested that the novel coronavirus, which causes a highly infectious respiratory disease called covid-19, has probably been spreading undetected for about six weeks in Washington state. The U.S. Food and Drug Administration on Saturday took steps to sharply expand testing.

Italy now has more than 1,600 confirmed cases, while Iran surpassed 1,500, with 66 deaths. Travelers from both countries appear to have spread the virus to other nations in the Middle East and Europe. Elsewhere, Indonesia, one of the few large nations thought to be free of the virus, said Monday that it had two confirmed cases, while others were reported from Australia to India to Portugal.

Officials are expecting more cases in other countries. "It is no longer possible to absolutely prevent new cases coming in," Brendan Murphy, Australia's chief medical officer, told reporters Monday. British Prime Minister Boris Johnson said the day before that he expected the outbreak to "spread a bit more" in Britain, where there are 39 confirmed cases.

Hundreds of Israelis are in quarantine over concerns that they might have come into contact with people infected with coronavirus. But that won't keep some of them from voting.

Israel staffed special voting places just for individuals in quarantine to participate in Israel's third national election in less than a year. Medical workers in full protective gear sat at the entrance to special tents set up for the occasion. Voters wore masks and gloves and could vote only if they were not showing symptoms and did not take public transportation to the polls.

Meanwhile, the morning after the United States reported its second coronavirus death, health and government officials continued to plead with Americans to stop buying precautionary face masks unless they are already sick or are health-care workers.

"It's important for folks to know right now their risk as American citizens remains low," U.S. Surgeon General Jerome Adams said on "Fox & Friends" on Monday morning. "There are things people can do to stay safe. There are things they shouldn't be doing. One of the things they shouldn't be doing, the general public, is going out and buying masks. It actually does not help, and it has not been proven to be effective in preventing the spread of coronavirus amongst the general public."

Adams said that as a health-care worker, he has to get "fit tested" when wearing protective masks, and those who do not wear the masks properly tend to fidget with them or touch their faces, which "actually can increase the spread of coronavirus."

The kind of mask that requires a "fit test" is called an N95 respirator. It should be worn tightly on a person's face and is meant to protect the wearer by filtering out 95 percent of airborne particles, according to the CDC. The other kind, called a surgical mask, is loosefitting and is mostly intended to protect the patient or outside world from the wearer's respiratory emissions. It is not considered to provide respiratory protection for the wearer.

The only people who should be wearing masks are healthy people who are taking care of someone who is sick or sick people who are coughing or sneezing when they are in public, according to the World Health Organization.

The coronavirus has prompted school closures across Idaho, Oregon and Washington state, as local education officials look to contain an outbreak in the Pacific Northwest amid traveling students and a rapidly spreading virus.

A small school district in eastern Washington state would be closed on Monday due to "a person under investigation" for coronavirus, officials said in a statement Sunday.

It's unclear what connection the individual has to Colville School District, which is located about 70 miles north of Spokane. But all five institutions in the district will be shuttered until further notice. The district has also suspended all after-school activities and will disinfect its buildings as the individual is tested, a process that may take up to three days, officials said.

Across the border in Idaho, two other districts — Troy School District and Genesee Joint School District — will also close their doors Monday for "precautionary coronavirus cleaning," they said on social media.

While neither school — and in fact, nowhere in the state — had reported positive or likely cases of the virus, officials made the decision after some of their students attended the same jazz festival as a group from a Seattle-area high school.

That institution, Jackson High School in Snohomish County north of Seattle, has had at least one case of the virus and will also be closed Monday.

Around the country, school districts have undertaken massive preparations to lessen the risk of exposure and get ahead of any possible outbreaks, according to The Associated Press. The measures range from online lesson planning to deep-cleaning schools to kill viruses.

Elsewhere in the Pacific Northwest, presumptive cases of the virus have led to individual closures, including at at least two other high schools and two elementary schools in the Seattle area, and at an elementary school just outside Portland, Oregon.

And in Rhode Island, three Catholic schools have temporarily shut down in response to three likely positive cases among students or staff who went on an educational trip to Europe.