WASHINGTON — Members of IfNotNow, a group that opposes Israel's military occupation, are used to being called fringe and anti-Semitic. What's unfamiliar is having major presidential candidates publicly agree with them. 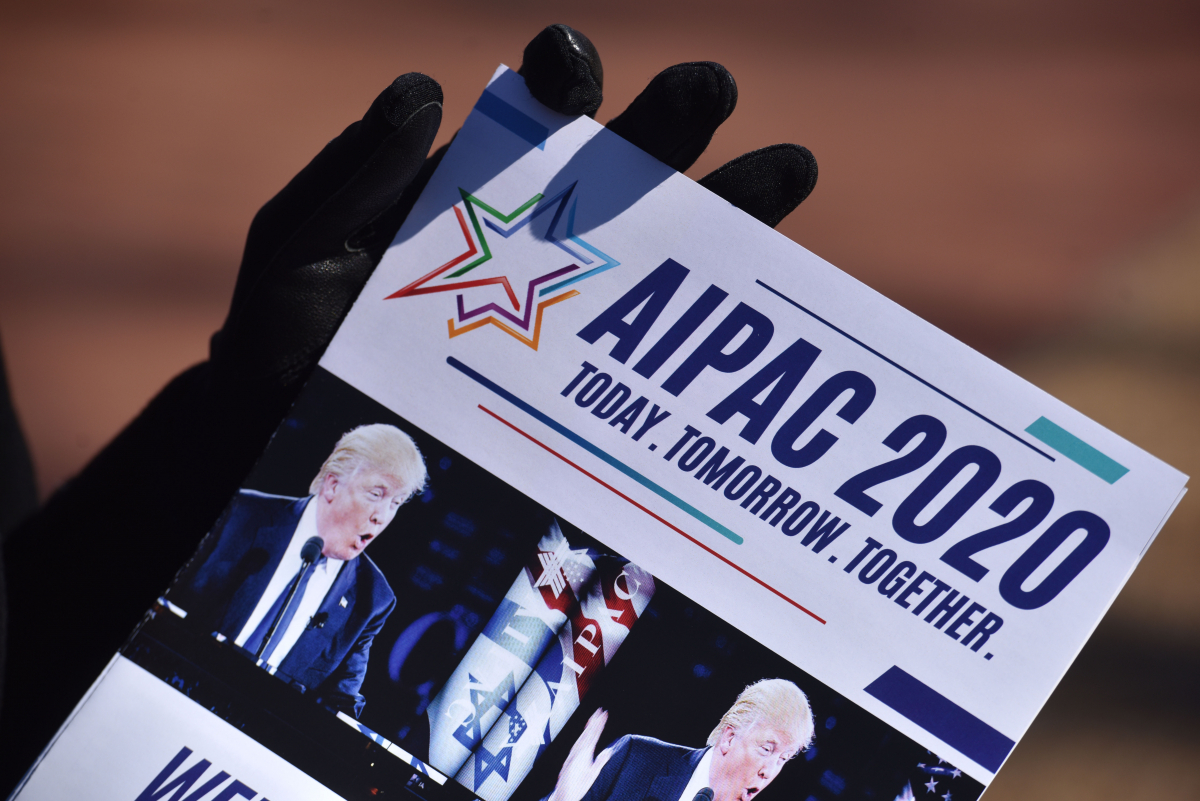 The conference, which runs through Tuesday, brings 18,000 people to the District of Columbia — under the umbrella of the pro-Israel lobbying group.

"I was glad to see that we actually have people running who are willing to respond to this call for moral leadership," said Noah Wagner, 23, who sneaked into the Walter E. Washington Convention Center with six other IfNotNow members Sunday and unfurled a banner that read: "AIPAC provides a platform for bigotry, we have a choice! Skip AIPAC!"

Wagner in particular praised Sanders, who accused AIPAC of providing a forum for bigotry last week when he said why he was declining to speak at the conference. It's meaningful to see a candidate willing to "challenge establishment views that brought about a broken status quo," Wagner said. "He's following the lead of groups like ours."

The boycott AIPAC movement launched by IfNotNow and other young activists has triggered debate: Are American Jews changing their relationship with Israel? Has AIPAC changed? Have Democrats?

Longtime watchers and activists agree that the activists represent a new generation of Israel critics that differs in key ways from the pro-peace movement of the 1990s.

That earlier movement focused on a two-state solution to the Palestinian-Israeli conflict, buoyed by witnessing the Madrid Peace Conference and the Oslo accords, when the world saw Yasser Arafat and Yitzhak Rabin shake hands.

The new groups are the product of post-millenial liberal politics, with antipathy toward nationalism of all kinds and a hunger to tear down the entire system of money in politics.

"What we said was: 'There's another way to be pro-Israel, you don't have to support whatever the [Israeli] government does,' " said Jeremy Ben-Ami, president of the group J Street, which formed in 2009 as a devoutly liberal but still pro-Zionist alternative to AIPAC. "Younger groups are saying: 'You don't have to be pro-Israel, you should be pro-human rights, and everyone should have a state.' "

Ben-Ami said the sharper ethos of the new groups is the result of Israel's continued and expanded settlements and other developments, including the increased alignment between the Israeli government and the Republican Party — even as 65% of U.S. Jews identify as Democrats or lean Democratic, according to an August Gallup poll.

"It makes me extraordinarily sad. These incredible young people are my kids and their friends, who have the best values in the world," Ben-Ami said. "It's very painful and a distancing of this segment of American Jewry."

Many members of the newer groups were in college chapters of J Street, Ben-Ami says. He's accustomed to intense discussions, sometimes fissures, about how to push for a solution to the conflict.

J Street and the liberal New Israel Fund do not, for example, support or advocate boycotts of AIPAC or of Israel itself.

IfNotNow launched this year's #SkipAIPAC campaign a month ago. Warren's announcement at a New Hampshire town hall that she was intentionally not attending came shortly before. The group was joined by MoveOn and the Working Families Party, two left-leaning groups that don't focus primarily on Israel.

A few days later, members of IfNotNow videotaped themselves confronting former vice president Joe Biden about AIPAC's opposition to the 2015 U.S.-Iran nuclear deal. Biden said he would go to the conference "to convince them to change their position."

In the end, Biden sent a video message, telling delegates that Israel's annexation plans and settlement activities were "choking hopes for peace."

IfNotNow was founded in 2014, in the wake of the war between Israel and the Hamas-ruled Gaza strip, and it has 16 chapters in the United States and Canada. Members hold a range of views about Israeli policy and Palestinian statehood, group leaders say. Many have close ties to Israel and went to Jewish day schools.

Their institutional tone is confrontational. A news release said Biden would address AIPAC, "alongside racist billionaire Mike Bloomberg and other bigots."

While experts agree that the movement is important to watch, they say its size is small and its impact hard to predict, especially with most American Jews still saying they are very or somewhat attached to Israel.

Halie Soifer, executive director of the Jewish Democratic Council of America, said the effort to boycott AIPAC comes from "very left-leaning groups and doesn't represent a meaningful voice in the Democratic Party."

Ben-Ami called the new groups "not an emerging majority, but large and loud."

On Sunday, a dozen activists handed out flyers outside the conference noting that scheduled speakers included Austrian Chancellor Sebastian Kurz, who has formed a coalition with his country's far-right party.

David Harris, chief executive of the American Jewish Committee, said some in the Jewish community have grown frustrated with the "fundamental and permanent" tension generated by the long-standing conflict between Israel and its neighbors.

"If Israel could wrap its arms around Gaza, Syria and Lebanon and sing the song of peace, it would," he said. "This permanent clash unsettles some American Jews who can't reconcile the inability to align core Jewish values with realities of statecraft."

Soifer said that despite the attention paid this year to which presidential candidates do and don't address AIPAC, most American Jews will base their vote for the White House "on issues like access to affordable health care, rejection of [the Trump] administration, climate change, gun safety."

"There are vocal minorities on both sides that don't represent what could be perceived as a silent majority," he said. "Something we know about the overwhelmingly majority of Jews is . . . they are not voting on Israel."