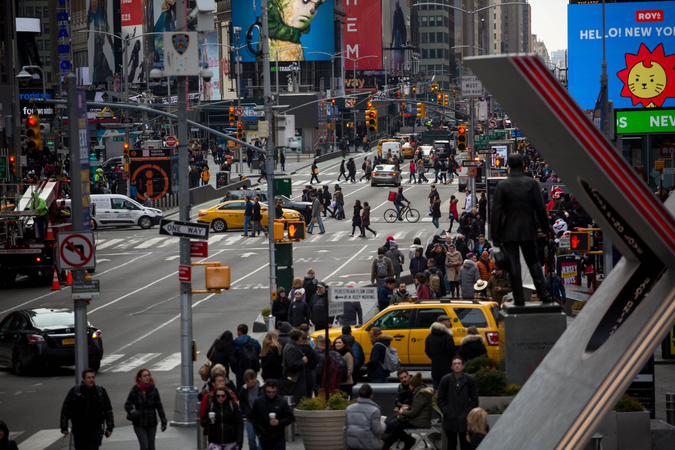 A major travel industry advocacy group in the United States is predicting a plunge in the number of visitors from around the world over the next few months as the country imposes restrictions on travelers amid coronavirus fears.

In its latest projection, the U.S. Travel Association said on Tuesday that it anticipates international inbound travel to the country will drop 6 percent between now and May, which it says would be the largest dip in global visitation since the financial crisis in 2007 and 2008. The forecast takes into account factors including hotel bookings, airline data and consumer sentiment data. About 79.3 million international visitors came to the country last year.

"It is important to note that conditions are changing daily and the prospect for an even larger impact on travel should not be discounted," David Huether, the group's senior vice president for research, wrote in a report.

Since the beginning of February, the U.S. government has not allowed foreign nationals who have visited China in the past 14 days to enter the country. U.S. airlines suspended all service to China as demand plummeted. Roger Dow, president and chief executive of the travel association, says the lack of tourists from China is a big factor in the projected decline.

"If you take China alone, it has 3 million visitors to the United States annually," he says. "When that 3 million for a certain period goes to zero, it has a pretty big impact."

A report released by Tourism Economics in early February warned that the number of visitors coming from China to the United States could drop by as much as 28% this year, potentially hurting states such as California, New York, Utah and Oregon.

Dow, who reiterated that there are no travel warnings for the United States, said the projected 6% drop could result in an economic hit of $2 billion to $3 billion.

"The question is whether this will hold, or does it get any worse?" he said.

Dow said uncertainty around the virus is having an effect on domestic leisure and business travel as well, as companies crack down on employee trips. Domestic travel is still expected to grow during the first part of the year, however.

"My concern is we get this thing behind us," Dow says, as spring break and summer vacation seasons approach. "If citizens of the United States decide they don't want to travel, that's not good at all. I don't see that happening, but we're watching it very carefully."