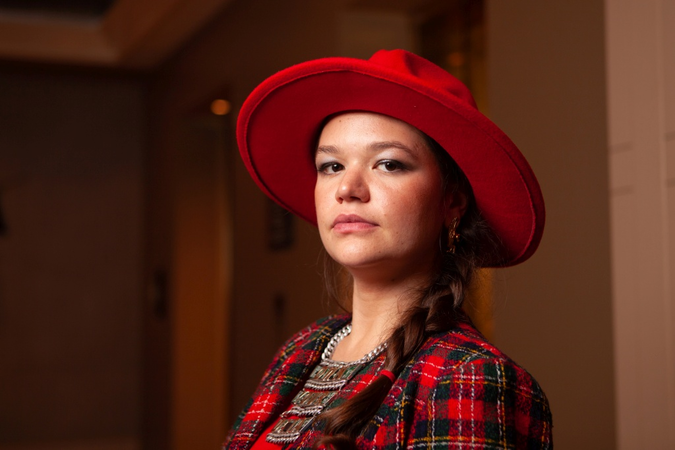 Brittany Kaiser is the author of "Targeted: The Cambridge Analytica Whistleblower's Inside Story of How Big Data, Trump, and Facebook Broke Democracy and How It Can Happen Again." MUST CREDIT: Photo by KK Ottesen for The Washington Post.

By Special To The Washington Post · KK Ottesen · NATIONAL, TECHNOLOGY

Brittany Kaiser is a data rights activist and whistleblower of Cambridge Analytica, the political consulting firm that harvested the data of 87 million Facebook users and did work for Donald Trump's 2016 campaign. She is the author of "Targeted: The Cambridge Analytica Whistleblower's Inside Story of How Big Data, Trump, and Facebook Broke Democracy and How It Can Happen Again" and is a subject of the documentary film "The Great Hack."

Q: When you were younger, you were an Obama supporter, you were interested in human rights advocacy. Can you talk about ending up at Cambridge Analytica and some of the decision points or rationalizations that kept you there for three-plus years?

A: I always assumed I would work in diplomacy or as a human rights lawyer and was working towards that. That's how I eventually ended up in Cambridge Analytica in the first place. Because I ended up doing my PhD in preventive diplomacy, looking into how people would be able to have enough real-time data to intervene in situations before they became violent. Specifically, looking into how you could prevent crimes against humanity and war crimes. [Former Cambridge Analytica CEO] Alexander Nix shared what they were doing for NATO and our allied militaries, which was to identify individuals vulnerable to be recruited into ISIS — young people in the United Kingdom either being recruited or possibly being sent messaging to encourage them to sneak into Syria. And to teach the digital teams of allied militaries to convince those kids to stay at home. I thought: This is amazing. That's what I want to learn how to do. So I'll take a consultancy and see where it goes.

I learned a lot more about data than I bargained for, obviously. I definitely started to quickly see the dark side of politics. Over the first year and a half I was there, we're in the middle of the Brexit campaign. And I'm starting to see a campaign that we're not running hands-on but did data work for in the beginning turn into something incredibly divisive. And then we get into the Trump campaign and various other conservative groups, advocacy organizations, that Cambridge was working for. You start to see projects specifically targeting neurotic people with messaging that shows their house getting broken into and saying, you know, "A gun, it's not just a right. It's an insurance policy." That's where it starts to get quite creepy.

Q: So what's your reaction?

A: I guess I kept telling myself: You're not running those campaigns. You're doing other things — and these people aren't going to win anyway. So it must be OK, right? It was only really after the Trump campaign when I had a two-day-long debrief presentation from my colleagues that ran the Trump campaign and the Trump super PAC when I really saw, for the first time, things that really disturbed me.

Q: Can you give an example?

A: The chart that the Trump campaign had used to categorize different audience groups. On one axis, it's how likely you are to vote. The other axis is how much of a supporter you are of Trump or Hillary. And they have different audience groups for different strategies, but one of them is called "deterrents." These are the people that are definitely Hillary voters if they are going to vote. There's no way you can get them to vote for Donald Trump. But you could possibly get them not to vote at all.

A: Exactly. Blatantly. So then they showed us different groups within that group and how they message those people. For instance, conservative women, in order to turn them off, they made this video called "She Can't Run Her House." That advertisement was all about how Michelle Obama, who actually, at the time, was talking about her and Barack taking care of Sasha and Malia during the campaign, said, "If you can't run your own house, you can't run the White House. I'm going to take care of my family first." But it was taken out of context and spliced with all of these things about Bill and Monica Lewinsky and saying Hillary Clinton was an unreliable woman because she had stayed with her cheating husband. And that was sent to women who were modeled to care about conservative values as their top political issue.

And that's where I said, I won't work for this company in America anymore. If you let me leave the country and start my own office, I'll stay. Because my father had had brain surgery, and it was quite obvious he was never going to work again, and no one else in my family had any money to pay any bills. So there was no way I was quitting my job over this. I just had to figure out a way to live with it. And I moved to Mexico to start my own office, so then I could work for people I wanted to work for and build something that was totally separate. That's the way that I justified it to myself.

Q: You've said, "Big data, Trump and Facebook have broken our democracy." How do you feel about having been part of that?

A: Well, it's still disturbing every time I look back on it, how far everything went. You know, I started out in a place — the Obama campaign — where we were not allowed to do negative messaging, and ended up in a place that enhanced negative messaging to the point where, in my opinion, it should be considered criminal. But the way that I have dealt with it is to do everything I can to stop this from happening now. Because, unfortunately, we're even worse off than in 2016. You know, there's now hundreds of Cambridge Analyticas, not one.

And we now have Facebook deciding they're no longer going to moderate political content and that politicians won't even be held to community standards. They basically refuse to enforce the laws we already have on their platform — laws against voter suppression, against slander and libel and incitement of violence. It worries me a lot. That's why I work with legislators to help pass not just privacy laws, but regulation of big tech. Like banning the negative use cases of algorithms that push up inflammatory content. Because we have to really force people like Mark Zuckerberg to be ethical. They're not going to make that decision themselves.

Q: Do you ever get pushback? People saying, well, who are you to tell us what's ethical now?

A: I mean, every now and then. But it's never too late to do the right thing. People that have seen the darkest side of this and know how it works are going to be some of our biggest assets in fixing it. As you can see in Congress when people are questioning Mark Zuckerberg [laughs], not everyone has the understanding of these really advanced, cutting-edge technology tools. So I do a lot of briefings for legislators and politicians and testimony and written comment so they understand what they're dealing with. Because this stuff changes and gets more advanced every day, so it's kind of an all-hands-on-deck sort of situation.

Q: We're in an election year now. What do you think the chance is that we're able to have a free and fair democratic election?

A: This year, it's not going to be great. I think we should actually be kind of scared about what we're going to see.

Q: What's your biggest regret in all this?

A: Not having blown the whistle before Trump became president.