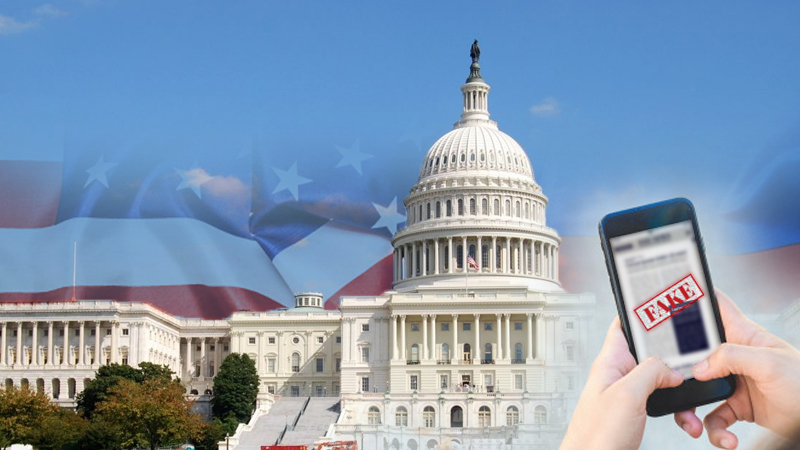 WASHINGTON — A top State Department official said Thursday that Russia is behind "swarms of online, false personas" that sought to spread misinformation about coronavirus on social-media sites, stressing the "entire ecosystem of Russian disinformation is at play."

The latest warning came from Lea Gabrielle, the coordinator of the government's Global Engagement Center, in testimony to Congress. Her remarks follow days after an unpublished agency report, unearthed by The Washington Post on Saturday, revealed that nearly 2 million tweets over a three-week period pushed coronavirus-related conspiracies abrosad.

Gabrielle did not link that report with her broader conclusions about Russian meddling online. But she said actors tied to the country - through "state proxy websites," official state-owned media and fake accounts online - were part of an effort to "take advantage of a health crisis, where people are terrified worldwide, to try to advance their priorities."

Gabrielle's comments, shared in advance with The Post, came as part of a broader congressional inquiry into the Global Engagement Center, an arm of the State Department that fights propaganda abroad. The agency's work has taken on greater significance in the midst of the 2020 presidential campaign, four years after Russian agents sought to weaponize social media to undermine the 2016 race.

Gabrielle, as the center's coordinator, told lawmakers that Russia and China represent ever-growing threats online. The Kremlin, in particular, "seeks to weaken its adversaries by manipulating the information environment in nefarious ways, by polarizing political conversations, and attempting to destroy the public's faith in good governance, independent media, and democratic principles," she said.

In February, a top State Department official accused Russia of deploying similar tactics around coronavirus, spreading falsehoods that may stoke panic or undermine health officials' response to the deadly outbreak. But the U.S. government has offered no public evidence of its claims, sparking criticism from tech companies, which say they remain in the dark about the exact nature of suspected Kremlin meddling.

Adding to the confusion, the State Department report on coronavirus obtained by The Post also did not mention Russia or any other foreign actor. Instead, it concluded only that networks of accounts had "evidence of inauthentic and coordinated activity," such as through the use of automation.

The gaps initially appeared to trouble some lawmakers on the Senate Foreign Relations Committee, who pressed Gabrielle on the matter.

"As people here in the U.S. and across the globe are turning to social media for information about this looming threat, they find these lies, these malicious actors, who are trying to really prey on our vulnerability and put us at danger," said Sen. Cory Booker, N.J., the top Democratic lawmaker on the subcommittee that convened the hearing. He called on the State Department to share more about its findings with the public.

The Global Engagement Center's analysis on the coronavirus focused on a three-week period between Jan. 20 and Feb. 10, around the time the World Health Organization declared coronavirus an international emergency. The State Department agency studied millions of tweets in countries excluding the United States. In total, known conspiracy theories amounted to about 7 percent of the Twitter conversation over that period, leading the State Department to conclude that these falsehoods were "potentially impactful on the broader social media conversation."

The tweets themselves floated a number of harmful conspiracies - suggesting, for example, that the coronavirus had been created by the Bill and Melinda Gates Foundation or was the result of a bioweapon. Some of the tweets linked to YouTube videos, according to the State Department document, suggesting that the problem went beyond Twitter.

On Thursday, Twitter appeared to raise concerns with way the U.S. government had compiled its research, which the State Department shared with the company after repeated requests. Twitter also said earlier this week it is "not seeing significant coordinated platform manipulation efforts around these issues."

"We always welcome the opportunity to collaborate with the government agencies tasked with protecting the integrity of the 2020 election; however, non-peer reviewed research using our public API can be deeply flawed," said Katie Rosborough, a company spokeswoman. The API is a tool that allows software developers to collect, analyze and present data from Twitter.

"We'd welcome the opportunity to learn more about the methodology, as well as engage in future research," she said.