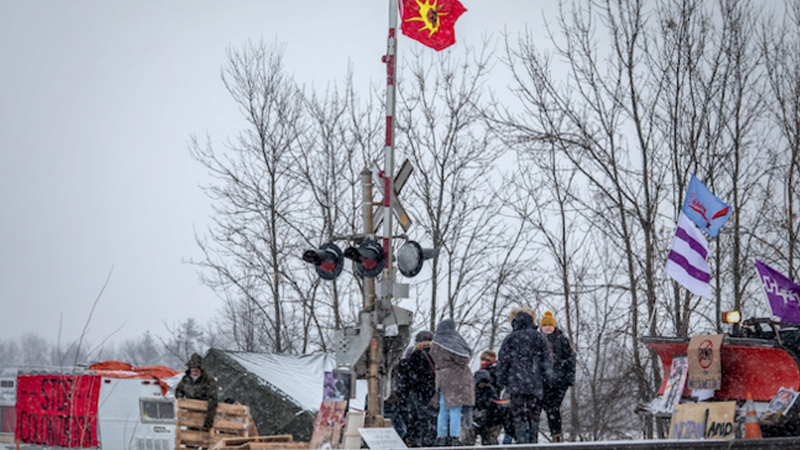 Demonstrators stand near railway tracks during a protest Feb. 13, 2020, near Belleville, Ontario, Canada. MUST CREDIT: Bloomberg photo by Brett Gundlock

Hopes that Canada could turn into a gas export powerhouse seem to be waning fast.

The current climate for energy investments in the country and the global market for liquefied natural gas are a far cry from October 2018, when a Royal Dutch Shell Plc-led group announced plans to build a massive LNG terminal on British Columbia's coast and Prime Minister Justin Trudeau hailed the project as "a vote of confidence" in Canada.

The latest sign of disenchantment came this week as a $6.7 billion (C$9 billion) LNG project in Quebec lost a large potential investor, which the Canadian Broadcasting Corp. identified as Warren Buffett's Berkshire Hathaway Inc. That follows announcements last year that Chevron Corp. is planning to sell its 50% stake in an LNG project in British Columbia, and its partner in the venture is seeking to trim its stake as well.

While LNG projects across the globe grapple with the outlook for an oversupplied market in the coming years, growing environmentalist opposition is adding insult to injury in Canada. An indigenous protest against a pipeline that will supply Shell's LNG project not only delayed construction of the conduit but also spiraled into nationwide blockades of key economic infrastructure that have hampered the country's economy.

"Delays like this add to the risk associated with projects," said Jackie Forrest, senior director at the ARC Energy Research Institute in Calgary. "It adds a headwind for sure in terms of the economics."

The pipeline that sparked the recent blockades -- TC Energy Corp.'s Coastal Gaslink -- had previously been a non-controversial project, hailed as a model for engagement with indigenous communities because it had garnered the approval of all 20 First Nations along its route, including the elected leadership of the Wet'suwet'en indigenous group behind the recent protests. The opposition from that group is coming from some of its hereditary chiefs.

More broadly, opponents of liquefied natural gas projects point to the industry's emissions of methane, a more potent greenhouse gas than carbon dioxide, and say that locking in dependence on any fossil fuel will thwart efforts to avoid catastrophic global warming. Proponents of Canadian natural gas in particular say that exporting the fuel to markets in Asia could reduce global emissions by displacing dirtier fuels, such as China's use of coal for electricity generation.

Canada is the world's fourth-largest natural gas producer and already is the fifth-largest exporter of the fuel. While the country only ranks 17th globally in natural gas reserves, that's still enough to maintain current production levels for as many as 300 years.

An advantage the country has in the development of an LNG industry is that its gas is relatively cheap. Natural gas traded at Alberta's AECO hub has declined for four out of the past six years and ended 2019 at $1.62 per million British thermal units, down from a record $12.92 in 2000.

Those lower prices, along with short shipping distance to Asia, help make Shell's LNG Canada project a potentially cheaper supplier to Asian markets than similar projects in the U.S. and Australia, Forrest said. While LNG Canada's supplies would be slightly more expensive than projects in Russia and Egypt, the added benefits of energy security keep Canadian projects competitive, she said in a February 2019 analysis.

The industry seemed poised to capitalize on those advantages when LNG Canada's investors, which also include Malaysia's Petroliam Nasional Bhd., Mitsubishi Corp., PetroChina Co. and Korea Gas Corp., announced they'd proceed with the project. The $29.8 billion (C$40 billion) facility in Kitimat, B.C., represented the largest private-sector investment in the country's history, and, given the support that it had received from all levels of government, the decision sparked optimism that more facilities may follow.

Canadian Natural Resources Ltd. vice chairman Steve Laut, whose company is the country's largest gas producer, said at the time that LNG Canada's decision gave "confidence to other proponents" and made it more likely other plants would be built in British Columbia. In an interview on Thursday, he struck a more cautious tone.

Other projects "still could happen," Laut said. "But LNG prices are quite depressed, so companies are taking a pause and reevaluating. Canada has another disadvantage, and that's our regulatory environment, which makes it harder for projects to go through."

Canadian Natural has been reducing its own gas output because of the recent low prices, and other producers may follow suit. The Canada Energy Regulator expects production to fall 1.8% this year to 15.95 billion cubic feet a day and to keep declining until hitting a low of 14.99 billion in 2023.

The global market for oil and gas investments is facing challenges as well, with the coronavirus outbreak dealing the latest blow to demand forecasts. Several LNG shipments are being canceled worldwide, and U.S. developers are being hammered in the equity and bond markets. The glut is poised to worsen, with BloombergNEF estimating that 71 million tons of new annual LNG production was sanctioned last year, with all of it scheduled to come online between 2023 and 2026.

But Michel Potvin, a councilor in Saguenay, Quebec, who leads the town's promotion agency, blamed the investor pullout there on Canada's handling of the rail blockades after the Wet'suwet'en protests, saying that "if this project doesn't happen in Saguenay, it will happen in Massachusetts, in Texas or wherever."

ARC's Forrest said she wouldn't be surprised if Canada falls out of favor for similar projects in the future.

"Now that an investor looks at the situation and the potential for delay, they may apply a higher cost of capital, which may make our projects more expensive," ARC's Forreset said. "That is one of my concerns. Certainty is very important."