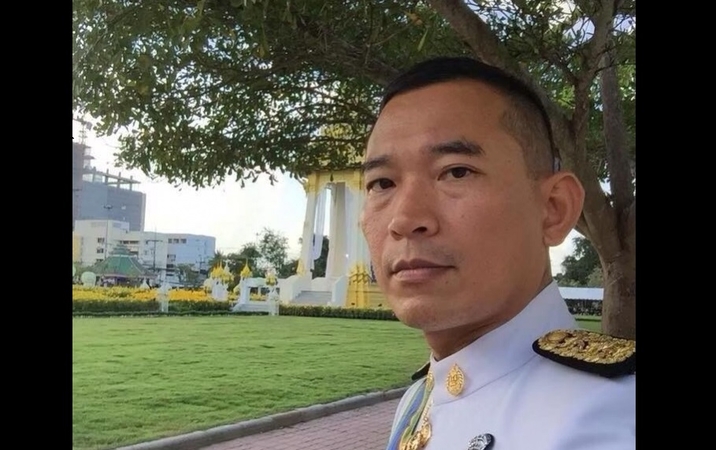 The heartbreaking letter of a Yala judge who took his own life on Saturday has sparked outrage in netizens about the judicial system.

Khanakorn Pianchana, who previously served as head of trial court at Yala Provincial Court, took his own life on Saturday (March 7) in his house in Chiang Mai after posting a two-page farewell letter on his Facebook page, which could be translated into English as "Khanakorn October".

The letter, dated March 6, mentioned the incident on October 4 last year when he shot himself in the Yala courtroom after reading a ruling. Before that he had posted a 25-page statement claiming that a superior judge had been trying to influence his judgement in a criminal case.

Khanakorn said in his farewell note that after the first suicide attempt he was sure he would be dismissed as a judge, but instead he was investigated by the Court of Justice and was charged as a suspect in a criminal case.

“Being deprived of a job I love means a loss of one's true self. My body and mind cannot bear the consequences of my action and my life is now filled with misery,” he wrote.

He insisted that he had done this out of sincerity to return justice to the people.

"I do not regret it and I'm proud of being part of administering justice for the Thai people,” he added.

"In the past, we had the 1997 Constitution written by the CDC [Constitution Drafting Council]. People and academics admit it was the most democratic charter the country had ever had,” the letter says. “You may wonder why when the charter was in effect, reviewing a ruling at the first-court level is not allowed. Could it be that the drafters knew such a review could pave the way for interfering of a ruling by regional court presidents?”

"I want to ask friends, you fellow-Thais: Do you find an evil intention in what I had done, which led to disciplinary and criminal action against me? A reply in your heart is enough. As for me, I knew from the start. It's a pity you are not my judge.

“I thought I would surely die on October 4 of 2019, but heaven decided to spare me and let me have extra time with my family. I have used it to fix and renovate my house, making sure that my wife and son can live here safely and comfortably,” the note says.

“I have taught my son to be strong and be good. A good person is one who does good things for himself, others, and the general public under the framework of morality.

“March 6-7 is a suitable date for me to leave this world, since my son’s summer vacation has already started. Before that I tried to meditate to calm my mind but it didn’t work out so well, so I decided to calm it with force.

“Life is just a journey. This body is not our own. In the end everything will turn to dust and we inevitably have to leave our duties and loved ones. The only thing that remains is our good deeds in the memory of others. I wish you all good luck and happiness. Farewell.”

He also added a postscript that a donation for his son’s scholarship is welcome by money transfer to his Siam Commercial Bank savings account Khanakorn Pianchana at account No 714-236-9930. 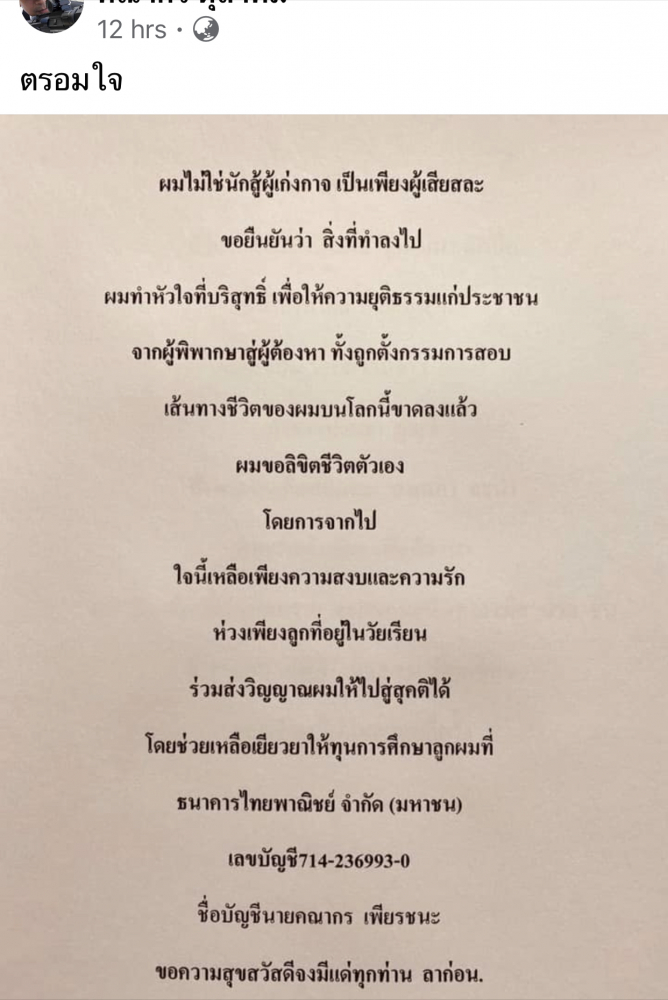 The departed judge’s letter has stirred widespread public criticism on the judicial system. Wan Muhamad Noor Matha, a party-list MP and leader of Prachachart Party, called for an investigation into his death and that the case be handled immediately and with transparency. “The government should also consider providing his family with financial aid as well as a pension package that is suitable for a judge who gave his life for the integrity of his career,” he added.

Khanakorn's verdict acquitted those who were charged by the authorities. The Court of Justice Thailand had also assured the public integrity of judges. The case sparked a political debate. Some blamed Khanakorn for making political points while pro-democracy activists demanded reform of the judicial system.

Khanakorn had also contacted Piyabutr Saengkanokkul, the then-secretary-general of the Future Forward Party, before he made the first suicide attempt last year. He complained to Piyabutr about the irregularities in the judicial branch. Last year, Khanakorn’s incident came as pro-democracy activists accused the court and law enforcement authorities of applying double standards and targeting political activists who opposed the military rule following the 2014 coup. This time, pro-democracy netizens have also expressed their deep sorrow and sympathy with him and his family while some government supporters have given a lukewarm response.

Piyabutr took to Twitter to express his deep condolences to Khanakorn’s family and his loved ones. “Khanakorn is not a criminal, he is a judge who tried to uphold justice. I would like to express my condolences to his family and his loved ones, hoping they will have the strength to bear this time of sadness and this unbearable incident,“ Piyabutr posted on his Twitter account on Saturday. 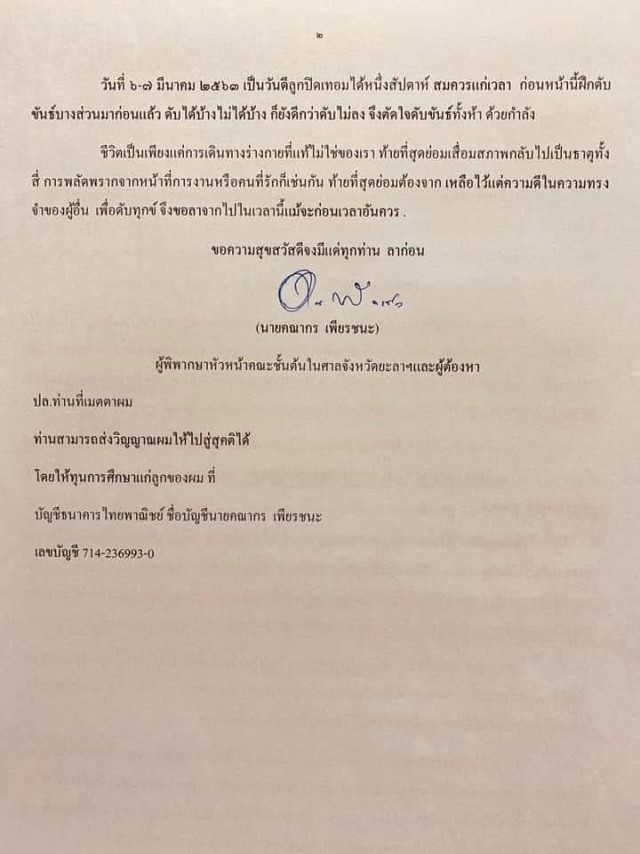