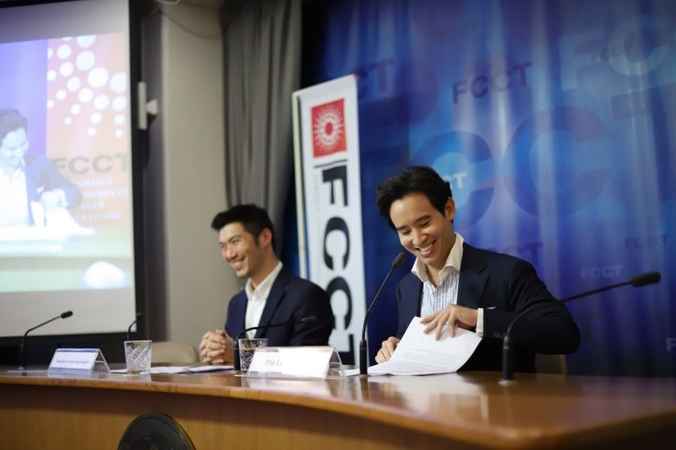 He was speaking at the Foreign Correspondents Club of Thailand, which invited him and the MP of the dissolved Future Forward Party, Pita Limjaroenrat, to speak on: “After Future Forward: What now for the opposition in Thailand?"

He said that the movement is not an organisation but a network of people who shared the same opinion that they would not surrender to dictatorship and they want to see a more equal society.

He said the group had three main missions. The first one is related to the upcoming local administration election, which he said has been dominated by a few influential and wealthy families.

He added that the group will leverage its strong will, its stance of anti-vote buying, and technology to bring "something fresh" to this domain of local politics.

The second mission is to charge forward at full steam in pursuing his party's campaigns for reform via all platforms, offline, online, on air or on ground. He believes that a creative idea can conquer guns, and vote ballots will triumph over bullets. The group will bring hope to fight fear, democracy against authoritariansim and future against the past. Once it can win the battle of ideas, it can win other wars and by that time true change will come.

The third mission is to establish a people's network in all 77 provinces across Thailand. It will be a network of people who stand ready to fight for democracy and human rights. Thailand needs this network of people which must be strong enough to stand against the military-backed government.

Thanathorn said the disbanded Future Forward Party was like a vehicle for people who stand ready to fight.

He said that as he is not involved in the management of any political parties, he has no authority to participate in making laws. But, he added, the good thing was he could now move freer as he was free from any rules or constraints governing political parties.

Thanathorn announced the formation of the Future Forward Movement after the Constitutional Court on February 21 dissolved his party, ruling that loans granted by him to the party were a violation of the related law. The court also banned its executives from politics for 10 years.