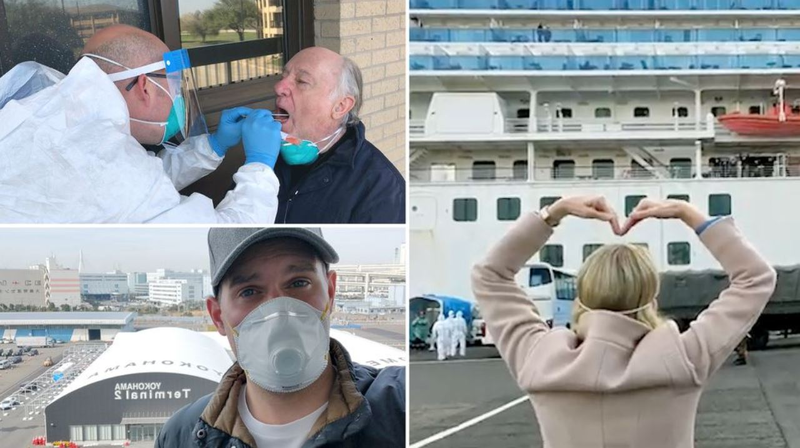 In total, it was 28 days of quarantine for Spencer Fehrenbacher. The graduate student from Vancouver, B.C., was placed at Travis Air Force Base in Fairfield, California, after spending 12 additional days onboard the Diamond Princess, which was put on lockdown because of an outbreak of the coronavirus.

Fehrenbacher and two other couples onboard the ship, Rachel and Tyler Torres from Texas and Gay and Phil Courter from Florida, shared their experiences with The Washington Post. We spoke to them from the military bases where they were waiting out another 14 days. The Torres and Courter families were staying on Lackland Air Force Base outside of San Antonio.

"In the early days on the ship, we kept saying, 'We're not safe here, something is wrong,'" Gay Courter said. She recounted the anxiety of watching 20 to 40 ambulances picking up infected passengers from the ship each day.

The State Department eventually evacuated American citizens on Feb. 17, but 14 passengers had tested positive for coronavirus on board the planes that took them home. However, Fehrenbacher and the others onboard, were not aware of the infected passengers until after they landed in the United States. "I felt betrayed, there's no doubt about it," Fehrenbacher said.

On March 2, Fehrenbacher's father, Scott, came from Canada to pick up his son at the end of his quarantine. He waited in the parking lot at the Vacaville Premium Outlets in California and was still unsure whether his son would be released. He reflected on his family's journey, scratching at a beard he's been growing for 28 days in solidarity with his quarantined son.

After a minor delay, father and son were finally reunited. "I couldn't let go," Spencer said.

But the Torreses' and the Courters' release was held up once more on March 2. Officials in San Antonio ordered a delay of the 120 people quarantined on Lackland Air Force Base after a Wuhan, China, evacuee was released and later tested positive for the virus. They were finally released on March 3.