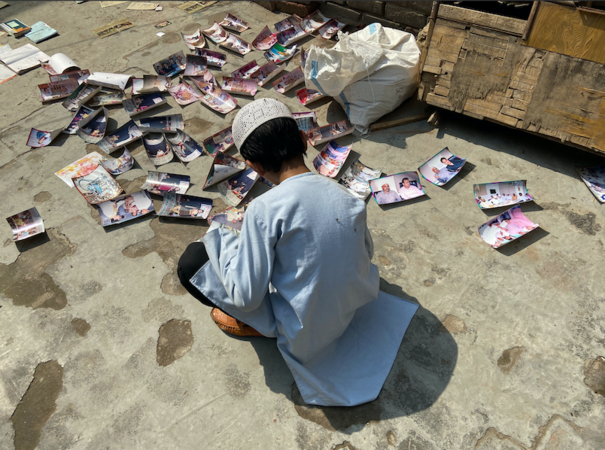 A child looks through photographs of Saleem Kassar's family salvaged from their torched home in Delhi. MUST CREDIT: Washington Post photo by Niha Masih

NEW DELHI - Hours before Anwar Kassar was shot and burned to death, he was having tea with a neighbor.

It was time to leave, the neighbor suggested to him. Violence had broken out between Hindus and Muslims nearby, and rumors flew about mobs targeting Muslims. But Anwar said he wasn't going anywhere, his neighbor recalled: Even though he and his brother were the only Muslim family on the block, this was his home of more than 30 years, and whatever would happen was his fate. 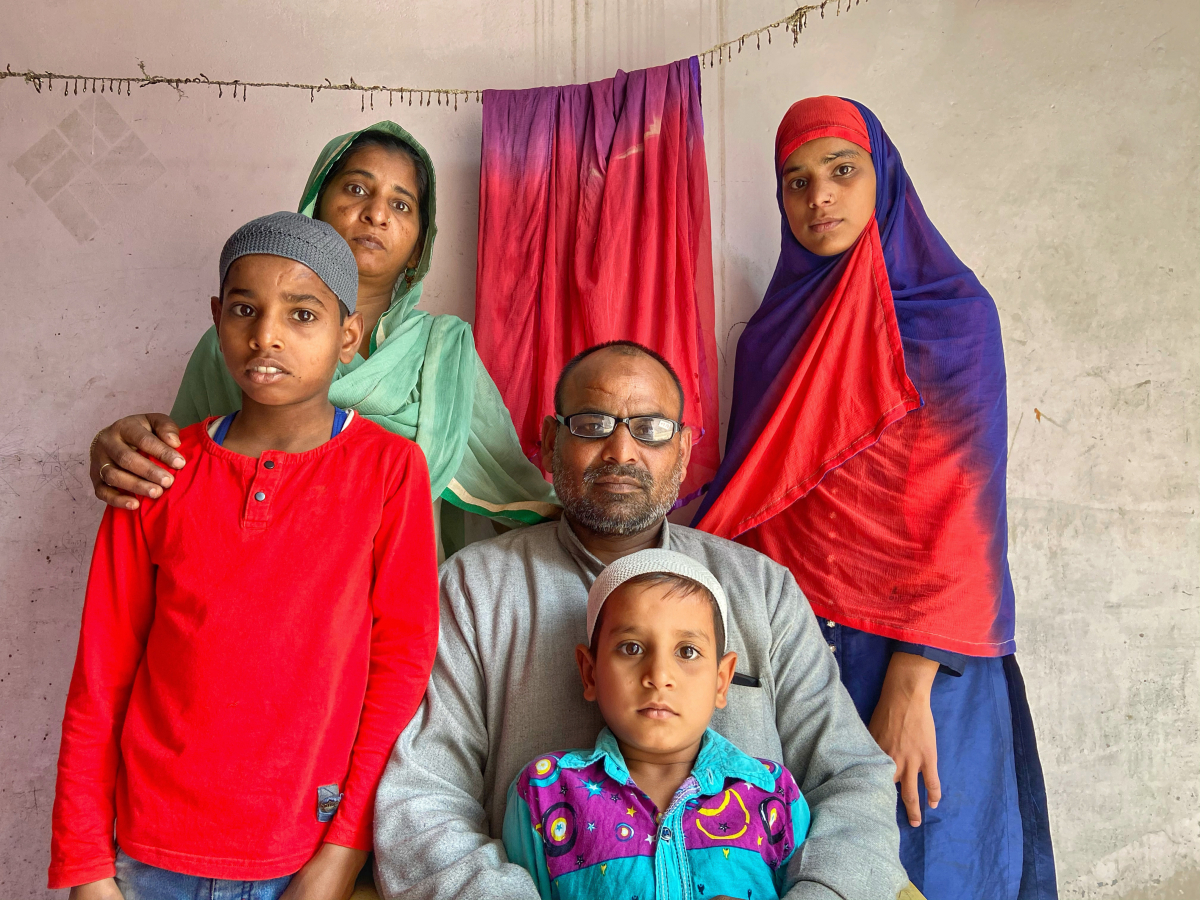 Later that day, dozens of men pulled Anwar, 58, out of his home, shot him and threw him into a fire in broad daylight, said two witnesses, one of whom was his younger brother Saleem Kassar, 52. Hidden by a Hindu neighbor, he watched it happen from a third-floor window.

More than 10 days have passed since Delhi descended into violence on a scale not seen in decades, and the full measure of the bloodshed is still emerging. What happened was far worse than anyone knew at first: At least 53 people were killed or suffered deadly injuries in violence that persisted for two days. The death toll continues to rise. 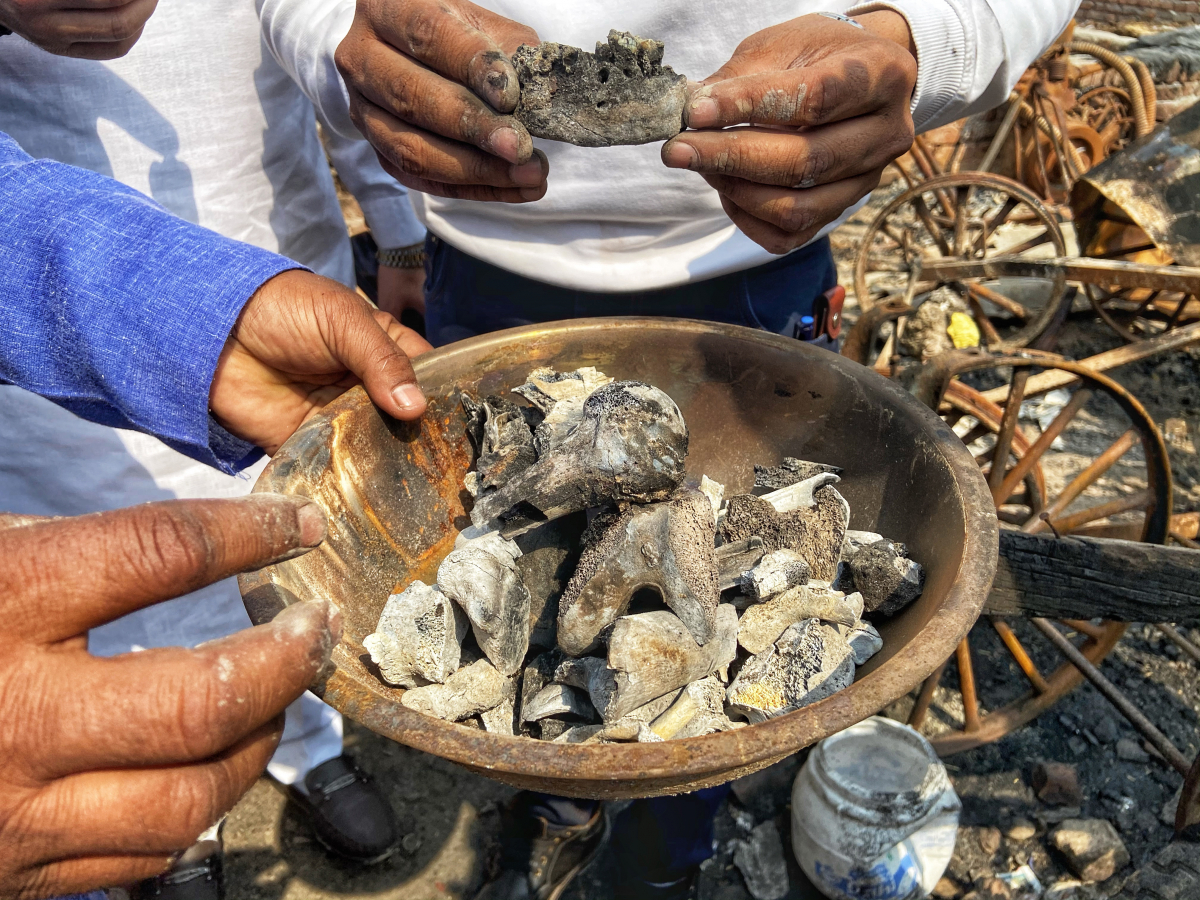 The majority of those killed were Muslims, many shot, hacked and burned to death. A police officer and an intelligence officer were also killed. So too were more than a dozen Hindus, most of them shot or assaulted. The police force - which is directly overseen by the central government - has come under criticism for failing to stop the violence. Witnesses say some officers joined the attacks on Muslims.

It was the deadliest Hindu-Muslim violence in the Indian capital since at least 1950, when reliable figures became available. It comes amid growing tensions around the agenda of Prime Minister Narendra Modi, who has sought to emphasize Hindu primacy in India through measures that include a controversial citizenship law passed in December.

The brutality unfolded just as President Donald Trump was making his first official trip to India, a 36-hour visit that involved a day of meetings in central Delhi. As Trump lunched with Modi on Feb. 25 in a cream-and-sandstone palace originally built for a prince, lives were forever altered 10 miles away.

A widower, Anwar lived alone in a one-room brick shed in the narrow, congested alleys of a neighborhood called Shiv Vihar. When he was younger, he worked ironing clothes. In later years, he rented carts to vendors and reared goats on a small vacant plot. His brother Saleem, an auto-rickshaw driver, lived on the adjacent street with his wife and children.

When trouble arrived, it came swiftly. On Feb. 24, large-scale violence had broken out nearby between Hindus and Muslims after a provocative speech by a member of Modi's ruling Bharatiya Janata Party, where he threatened opponents of the citizenship law.

The next morning, Saleem said, he stepped outside his cramped two-room home and saw his car had been vandalized. Several young men were pushing it away, a prelude to setting it on fire. He rushed back inside and shouted at his wife, Nasreen, and his five children, the youngest 7 and the eldest 20, to run outside. They left so quickly they didn't have time to put on shoes.

Two doors down, the maroon iron gate to his neighbor's house was open. Saleem's whole family ran inside. "A mob is coming," he told his neighbors in desperation. They locked the gate and told the family to get upstairs. On the third floor, Saleem locked his family into a room and ran toward a window with a view of his brother's home.

He recalled seeing a mob of a few hundred people, most of them wearing helmets, armed with sticks, swords and small pistols. He heard shouts of "Jai Shri Ram," or Victory to Lord Ram," a rallying cry of Hindu nationalists and the ruling party.

Then he watched, helpless with terror, as Anwar was killed.

Saleem and Jitendra Kumar, a painter who lives in the area, gave similar but independent accounts of Anwar's death. Other witnesses provided details that matched Saleem and Kumar's descriptions of the events.

First, the mob vandalized Anwar's home, throwing his clothes and supplies out the door and setting them on fire, Saleem said. Anwar cursed at the rioters destroying his home, Kumar said.

Some men held Anwar's arms while another shot him twice, then the mob hurled him into the fire. Anwar staggered to his feet and was shot a third time. The assailants heaved a nearby bicycle rickshaw on top of him, trapping him in the flames.

The mob was not finished. Its next stop was Saleem's house, where rioters rampaged through the tiny home, breaking everything in sight, according to several of his neighbors. Then they set it on fire. Neighbors said they yelled down and pleaded with the mob to stop out of fear that their own homes - Hindu homes - would be set ablaze.

As night fell, Saleem said, he asked his neighbors to help his family flee the area. The neighbors disguised them as Hindus, applying a stripe of saffron paste to their foreheads and placing a saffron-colored scarf around Saleem's neck.

"They told us, 'Don't stop and look at your house,' " Saleem recalled. "Don't try and pick up any things. Just run."

Days after the violence, the lanes were once again quiet. More than a dozen residents said they saw nothing of what happened to Anwar as they cowered in their own homes. An unusual number claimed they were out of town that day. One group of neighbors sat on a cot they had taken from the wreckage of Saleem's house and professed ignorance as to why only his and his brother's homes were targeted.

"We don't know why, so how can we say?" asked Pawan Kumar, 38, an auto-rickshaw driver.

"I felt terrible," said Jitendra Kumar, the painter who said he witnessed the killing. "Political leaders divide people with their agenda, and it is the common man who dies."

On a recent afternoon, Saleem returned to the spot where his brother was killed. He bent down in the midday sun and sifted through a pile of black and gray ash with his hands, searching for bones.

He lifted charred fragments that looked like joints from the ground and placed them in a battered bowl.

"Many people were watching from their rooftops," he said, looking up at the surrounding houses. "But nobody saved my brother."

Two police officers said the authorities had recovered half of a charred leg from the area and have sent it for DNA testing using samples from Saleem and his niece, Anwar's daughter. Rajesh Deo, a senior official with the Delhi Police in charge of investigating last week's violence, said Thursday that he was not yet aware of the case.

The men who killed his brother were mostly strangers from outside the neighborhood, Saleem said. But he recognized three local men, one of them by name. "I don't think I can return there after what I witnessed," he said. "All we have left are the clothes on our backs."

These days Saleem, a stout man with a bristle of short black hair, finds it difficult to sleep: When he closes his eyes, he returns to that third-floor window.

He thinks of his home and all he owned, ruined. He thinks of his brother, a man who preferred to go barefoot and was good to his nieces and nephews. He has the bones that he gathered, brittle and blackened. One day soon, he plans to bury them at a cemetery down the road.