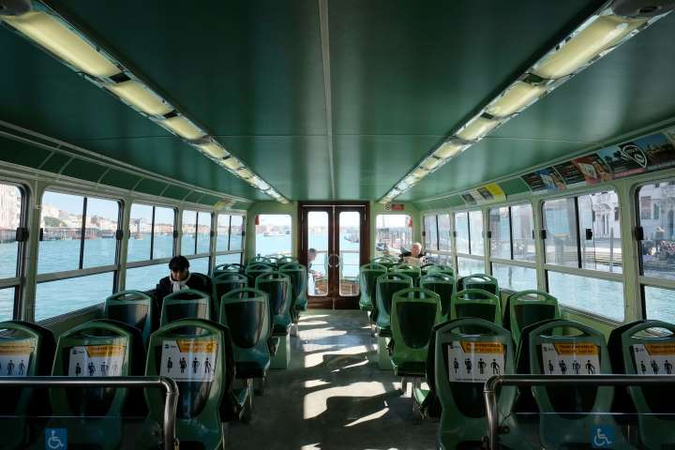 ROME - Italy on Sunday launched a complicated and urgent plan to restrict the movement of roughly 16 million people, a measure that unleashed confusion about how it could be enforced and whether it would be enough to slow the spread of the coronavirus.

The plan to lock down large swaths of the north was the first major attempt by a democracy during the coronavirus crisis to radically halt the routines of daily life - an effort that will have significant effects on civil liberties. But in the hours before and after the measure became law, people continued to stream out of the northern hubs of Milan and Venice on trains and planes for southern Italy or elsewhere in Europe.

Sunday, then, provided the first glimpse of a coronavirus lockdown, European-style - a test of how the open-borders spirit of this continent might change as countries grapple with the scale and risks of the disease.

As the day went on, it became clear that Italy was not trying to impose anything close to the absolute movement restrictions that have been enforced by China. Some analysts pointed out that even limited movement outside Italy's north risked further spreading the virus, and for the first time a European Union leader - Czech Prime Minister Andrej Babis - suggested that Italy's government needed to do more to interrupt the flow of its citizens across the bloc's borders.

"Italy should ban all its citizens from traveling to Europe," Babis told Czech Television on Sunday. He said Europe was unable to take its own action because its Schengen rules allow movement across borders without passport control.

Other European countries have insisted that borders remain open. It was unclear whether either scenario would help stop the outbreak from spreading as cases multiply throughout the continent.

"We're all in a state of confusion," said Ezio Mauro, former editor in chief of the Rome newspaper La Repubblica. "The [Italian] government is finding itself in a difficult spot because it is experimenting, fighting against an enemy whose origin, nature, effects and consequences are unknown."

Data released by Italy on Sunday night underscored the urgency. Active cases jumped more than 1,300 in a single day to 6,387, and deaths jumped by 133 to 366.

Italy announced its new decree in a middle-of-the-night news conference early Sunday. Prime Minister Giuseppe Conte described emergency steps: People across the north, in the region of Lombardy and in 14 other provinces, would be barred from exiting or entering other than for emergencies or essential work or health matters.

But Conte also said some transportation would continue. He framed the measures as part of a broader message to keep distance from others and not "throw parties."

"We all must exercise responsible behaviors," he said.

On Sunday afternoon, Italy's foreign affairs ministry said people could still move in and out of the sealed-off zones for "proven work-related reasons," and advised them to carry documents to prove as much in case they encountered police controls.

Later, Italy's interior ministry provided more detail, explaining that movement could happen only if people have certificates and fill out forms provided by authorities. The ministry said that authorities would perform checks on highways and other main roads, and that passengers at rail stations could be subject to "thermoscan" checks of their temperature.

Those who violate movement restrictions could face up to three months in prison - but graver offenses against public health could be punished by up to 12 years, said a law enforcement official who was not authorized to discuss the matter and spoke on the condition of anonymity.

Meanwhile, planes left Milan on Sunday for capitals in Europe, as well as Moscow and Doha, Qatar. Trains continued to carry passengers to southern Italy.

"The idea of not knowing how long this situation lasts made me decide to move," said Alessia Martino, 22, who lives in Milan but was about to board a train for the southern region of Puglia, where her family lives. "We can still study from home, and the most important thing for us is to be with our parents."

Several regions in the south tried to put up their own restrictions, including mandatory 14-day quarantines, on people arriving from areas at the center of the outbreak.

Maria Demertzis, the deputy director of the Bruegel think tank in Brussels, said infrastructure at borders and airports would make it easier to monitor Italians traveling internationally than domestically. But she also said it was shortsighted for European countries to think that cutting off the flow of Italians would snuff out the virus's spread.

"Just preventing Italians from moving is not the only solution we need," said Demertzis. She said Italy was wrestling with restrictions that other European countries might soon be facing.

"It will be important to decide which steps to take when," he told the Austrian Broadcasting Corp. "You can close schools for one or two weeks and this is urgently necessary in Italy. It will happen in other European countries. The decisive question is when to do it."

Later Sunday, the Italian airline Alitalia announced that it was suspending flights from Malpensa, Milan's largest international airport, and continuing only with domestic flights at the smaller Linate airport, according to the Corriere della Sera newspaper. Those measures are to remain in place through April 3.

China sealed off some 60 million people in Hubei province in January, a move credited with slowing the spread of the virus. But Italy is a country with a fragile central government and a reputation for daily, convivial joys. Many in the north - including mayors and two regional governors - criticized Conte's decree as unclear, hastily put together, or overly harsh.

The governor of the Veneto region, which includes the locked-down zone around Venice, asked Conte to exempt his territory from the restrictions. He said there was "no dialogue" before the decision was made.

"We all know laws are not precise to an inch," Gov. Luca Zaia said. "But a decree this important should have gotten rid of some doubts that we want to clarify and deal with."

But even as some travel continued, the restrictions threatened to bring much economic and social activity to a halt in Italy's most prosperous region. Schools and museums are closed. Weddings and funerals have been stopped. Restaurants and bars are allowed to remain open, but only for limited hours and if they ensure that people remain one meter from one another.

"It's sad," said tour guide Rosanna Giannotti, 73. "It's something I've never experienced before. We've had other problems. But this seems to be the biggest crisis I've ever seen."

On Twitter, the director-general of the World Health Organization, Tedros Adhanom Ghebreyesus, said Italy was taking "bold, courageous steps" aimed at slowing the spread of the virus.

The government's restrictions apply to three swaths of territory - the largest in the area surrounding Milan, and two others along the eastern coast. Those zones include about 85% of the country's confirmed coronavirus cases.