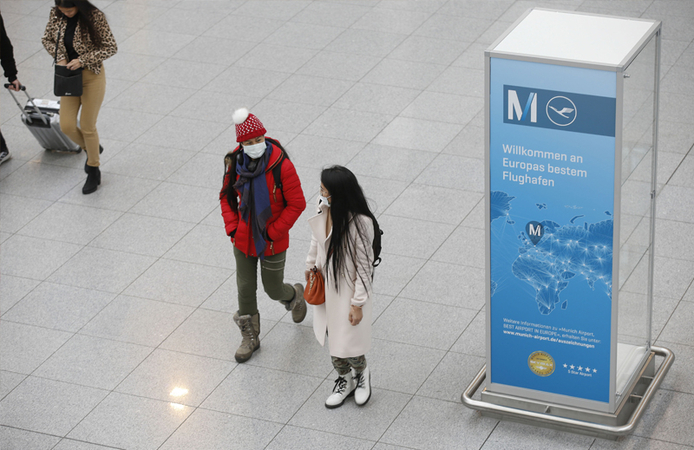 Germany stepped up efforts to protect companies and workers after the coronavirus hit home on Monday with the first two reported deaths.

Chancellor Angela Merkel's administration will make it easier for businesses to apply for aid to offset wages during furloughs, reviving measures that helped prevent large-scale layoffs during the 2008 financial crisis.

Keeping workers off factory floors could help stem the spread of the disease, which has shut off whole regions in China and Italy -- key trading partners for Germany. Alongside the safety net for companies affected by supply and demand disruptions, the government urged events with more than 1,000 people to be called off.

Pressure on Germany to act has intensified. The first deaths in the country -- an 89-year-old woman in Essen and a 78-year-old man in the town of Heinsberg with a history of health problems -- added to the sense of urgency.

The government's response, aimed at striking a balance between reassuring business and avoiding public panic, buys time for authorities to assess the scope of the economic damage and for health-care facilities to better cope.

"The most effective resource against the virus is the time factor," Merkel said in Berlin on Monday, hours after hosting a late-night coalition meeting to map out the government's response. "We'll be well prepared for the situation that we have and that is coming."

The heightened level of caution is affecting not just concerts and sporting events but also corporate gatherings. Volkswagen indefinitely postponed a staff meeting, often attended by thousands of workers, planned for March 19 at its Wolfsburg headquarters.

In addition to looser rules for short-time work compensation, Germany's coalition parties agreed other measures to cushion the impact from the virus. The efforts include extending the scope of write-offs for investment in "digital goods" and more favorable tax treatment for smaller firms. The government will also make proposals on how to provide liquidity to companies particularly affected by the impact of the virus and will hold talks soon with leading industry groups.

"The package is a good step in the right direction, but it will only tackle the impact from a short-lived economic shock," said Carsten Brzeski, chief euro-region economist at ING Groep NV. "If covid-19 spreads further and the economic impact worsens, last night's move will not have been the final word."

Germany also sent a signal that it's prepared to spend, as the Europe's largest economy struggles to fend off a recession. Merkel's Christian Democratic-led bloc and the Social Democrats agreed to invest an additional $14.1 billio (12.4 billion euros) between 2021 and 2024.

The clearest sign that the virus was hitting the German economy came on Friday, when Deutsche Lufthansa slashed capacity by as much as 50%.

"The impact on our booking situation is immense," Chief Executive Officer Carsten Spohr said in an internal memo to employees seen by Bloomberg. "We must assume that it may take months before we will see first signs of stability," he said in the Friday message.

Health Minister Jens Spahn urged people to reconsider where they go as the number of cases rise to more than 1,100.

"It's certainly easier to give up a concert, a club visit, a soccer game than the daily way to work," he said Monday in Berlin. "Therefore we propose measures that permit slowing the dynamic of the epidemic. That is the highest goal."

Germany's professional soccer league is sticking with its schedule for the coming weekend, but said it will work with authorities on holding matches, raising the prospect of playing in empty stadiums.

Finance Minister Olaf Scholz said Monday it's unclear whether the virus will have long-term repercussions, but pledged that Germany is prepared "to do everything needed to stabilize the economy and secure jobs."

Should Germany enter a serious crisis, its response would dwarf a proposed cut in the so-called solidarity tax by $5.7 billion (5 billion euros) this year, Scholz told RND newspaper consortium.

Merkel's coalition didn't agree on an accelerated phaseout of the tax -- which is due to be scrapped for 90% of taxpayers in 2021 -- or earmark a set amount of funds for state-backed loans and guarantees to ease a cash crunch.

While Germany has Europe's biggest budget surplus, Merkel's government has long resisted pressure from the European Central Bank and other institutions to unleash its fiscal power with spending that might benefit the region's wider economy.

Merkel's CDU had previously ruled out a more sweeping stimulus package to stem the damage wrought by the virus outbreak, arguing that a surge in public spending won't address worries among consumers and investors. The approach instead is to seek to contain the virus and evaluate the fallout.

"We need to track the economic effects very closely," Economy Minister Peter Altmaier said Monday in Berlin. "We can't allow this virus, which is so dangerous for people, to also infect the global economy and make it sick."