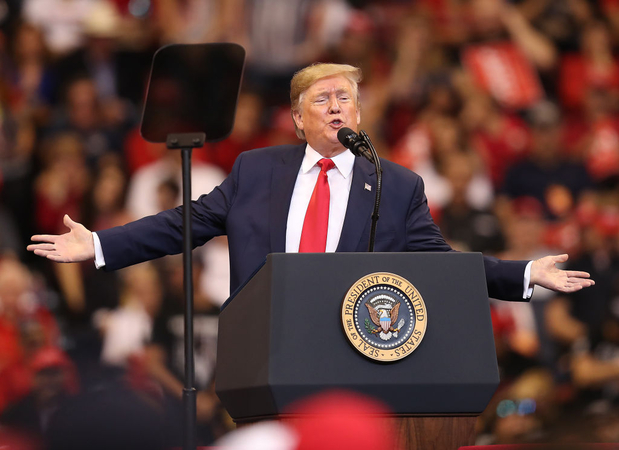 WASHINGTON - A senior U.S. intelligence official told Senate lawmakers on Tuesday that they do not have evidence that Russia is interfering in the 2020 election to benefit a particular candidate, according to three officials familiar with the closed briefing.

The head of national counterintelligence, William Evanina, told senators that the Russians "continue to be broadly engaged in social media activities designed to divide us further, to discredit our electoral system and to disrupt our election," said one official present, who like others spoke on the condition of anonymity because the session was classified.

Evanina's answer came in response to the first question asked - from Senate Majority Leader Mitch McConnell, Ky. - at the election security briefing for all senators. A similar session was held earlier Tuesday for all members of the House.

McConnell's question and Evanina's answer, which were narrow and careful, "felt orchestrated," said a second official, who was briefed on the meeting. "Both question and response were clearly pre-drafted."

The intelligence officials who gave the briefing, including National Security Agency Director Paul Nakasone and FBI Director Christopher Wray, did not give lawmakers an impression that the Trump administration has a solid grip on dealing with foreign interference in the coming election, said a third official briefed on the session.

Senators "came out of it without a true sense that this administration has a handle on this and we're going to be OK for 2020," the official said.

The briefing appeared to be an attempt at damage control by the intelligence officials in the wake of a session last month in which the intelligence community's point person on foreign election threats, Shelby Pierson, informed House Intelligence Committee members that Russia had "developed a preference" for President Donald Trump in 2020.

Pierson did not say Russia had taken steps based on that preference to intervene on behalf of Trump, an intelligence official said. But that nuance apparently did not mollify Trump, who when informed of her briefing, grew angry and suspicious that Democrats might try to leak that assessment to undermine his bid for reelection.

Soon after that, Trump replaced his then-acting Director of National Intelligence, Joseph Maguire, whom he apparently blamed for Pierson's briefing, with Richard Grenell, a Trump loyalist and the current U.S. ambassador to Germany.

On Tuesday, senators also were disconcerted that Grenell, as the head of the intelligence community, was not present, said one of people briefed on the session. The heads of other agencies, including acting Homeland Security Secretary Chad Wolf, were there, and Grenell had been scheduled to appear, according to a list of participants circulated to lawmakers on Monday.

But Grenell declined to go to Capitol Hill, citing apprehension about his preparedness to address sensitive subjects that tend to upset the president, according to three people familiar with the matter.

He asked Trump to be excused from the briefings because he anticipated pointed questions from Democrats about politically volatile subjects - such as intelligence assessments that Russia is once more interfering in U.S. politics, two people familiar with the matter said. They, too, spoke on the condition of anonymity to describe private discussions.

Maura Beard, a spokeswoman for the Office of the Director of National Intelligence (ODNI), said in a statement that the agency never told Congress that Grenell would participate in the briefing. She said so despite the list circulated to lawmakers Monday showing that he was scheduled to appear.

Grenell's name had been included in the list of briefers given to Congress on Feb. 27 as well, people familiar with the matter said, along with other national security officials including Wray, Nakasone and Wolf.

The latest list of briefers, provided to Congress on Tuesday morning, included Evanina in lieu of Grenell.

Trump has long chafed at notions that Russia has interfered in or sought to intervene in the election, dating back to his pique at the U.S. intelligence community's unanimous conclusion that Moscow took steps to aide his election in 2016.

"There is another Russia, Russia, Russia meeting today," Trump tweeted Tuesday morning. "It is headed up by corrupt politician [House Intelligence Committee Chairman] Adam 'Shifty' Schiff, so I wouldn't expect too much!"

Schiff tweeted in response: "Mr. President, you are wrong. As usual. Today's briefing for all House Members focuses on the threat of foreign interference in our election. The briefers are agency heads and senior officials. They are your own people. We will insist on the truth, whether you like it or not."

Grenell, who lacks substantive intelligence community experience, has been one of Trump's most vocal and partisan backers. Even before he took the ambassador position, he cast doubt on the idea of Russian interference in the 2016 election. In an opinion article for Fox News, he played down the severity of the threat, saying "Russian or Russian-approved tactics like cyber warfare and campaign of misinformation have been happening for decades."

Tuesday's briefing is part of a regular series to keep lawmakers apprised of the government's progress in securing federal elections and on foreign interference. Congress in December mandated such briefings for leadership and the House and Senate intelligence committees.