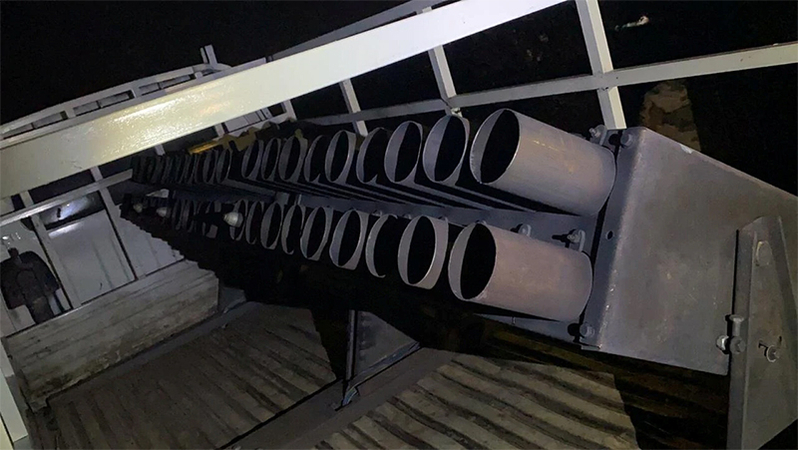 The United States launched airstrikes against an Iranian-backed militia in Iraq early Friday, responding to a rocket attack on a military base that killed one British and two U.S. service members in a new round of escalating tensions.

The Pentagon said in a statement that U.S. forces hit facilities "across Iraq" linked to Kataib Hezbollah, including storage facilities that housed weapons used in attacks on American and coalition troops.

"The United States will not tolerate attacks against our people, our interests, or our allies," Defense Secretary Mark Esper said in the statement. "As we have demonstrated in recent months, we will take any action necessary to protect our forces in Iraq and the region."

The aerial bombardment took place around 1:30 a.m., according to the Iraqi military. It was unclear whether any militia members were killed.

In response to a request for a White House statement, a senior administration official said that President Donald Trump had directed U.S. forces to conduct strikes on five Kataib Hezbollah weapons storage facilities "to significantly degrade the group's ability to carry out future attacks."

"The President has been clear that we will not stand for the Iranian regime attacking Americans in Iraq or elsewhere, whether directly or through proxies," the official said in an email.

Another Iran-backed militia, Harakat al-Nujaba, accused the United States of hitting militia and Iraqi army headquarters, as well as a civilian airport. In a statement early Friday, it said that further strikes could prompt retaliation involving an "eye for an eye."

The group did not elaborate on what that might be, and it was not immediately possible to confirm the U.S. statements that the strikes had only targeted militia facilities, or the militia claim that a civilian-related location had been struck.

Army Gen. Mark Milley, the chairman of the Joint Chiefs of Staff, told reporters at the Pentagon on Thursday morning that defense officials had "pretty good confidence" who launched the rockets, citing the capture of a truck by Iraqi security forces on the northern outskirts of Baghdad they said was used in the attack. Iraqi officials released photos of the truck, a flatbed with launchers rigged to it in makeshift fashion.

"You don't get to shoot at our bases and kill and wound Americans and get away with it," Esper told reporters.

Milley said that about 30 rockets were fired at Taji, a base that is shared by Iraqi and coalition forces. Twelve to 18 rockets landed on the base, wounding 14 people, including five seriously, and causing some structural damage, the general said. The wounded included U.S., British and Polish service members, as well as contractors, he said.

The Pentagon was withholding the names of the Americans killed until families were notified.

The British Ministry of Defense identified its service member killed as Lance Cpl. Brodie Gillon, 26. She was a reservist and combat medical technician with the Scottish and North Irish Yeomanry and deployed with the Irish Guards Battle Group, the ministry said.

The rocket attack and U.S. retaliation mark the latest rounds in a proxy war with Iran that stretches back years and escalated amid the Trump administration's "maximum pressure" campaign, in which crippling sanctions have been placed on Iran in an attempt to get it to negotiate a new nuclear agreement. President Trump withdrew the United States from an Obama-era pact that had lifted U.S. and international sanctions on Iran in exchange for limits on its nuclear program.

On Dec. 27, a similar rocket attack on a base outside the city of Kirkuk killed a U.S. interpreter, Nawres Hamid. Two days later, U.S. forces launched airstrikes on five sites in Iraq and Syria affiliated with Kataib Hezbollah, which U.S. officials have said receives support from Iran's Quds Force.

Militia members and supporters responded by storming entrances to the U.S. Embassy in Baghdad on Dec. 31, chanting "Death to America" and setting fires. They eventually withdrew.

On Jan. 3, the United States launched a drone strike near the Baghdad International Airport that killed Qasem Soleimani, who commanded the elite Quds Force.

That spawned concerns that Iran might retaliate with a larger attack in the region. On Jan. 8, Iran launched ballistic missiles at two military bases in Iraq. No U.S. or Iraqi troops were killed, but the Pentagon reported that more than 100 service members suffered concussive injuries.

Rockets have been fired at bases in Iraq since then, but no Americans had been killed.

As the United States, Iran and much of the world struggled with the coronavirus and the economic and social upheaval from the spreading health crisis, initial reaction to the new U.S. strikes was muted. Unlike the December attacks and response, which prompted immediate presidential tweets, Trump made no initial public comment.

Congress was also largely silent. The December exchanges - followed by the killing of Soleimani and Iranian retaliation - provoked bipartisan criticism that led this week to passage of a measure to limit the president's authority to launch military operations against Iran. Trump has threatened to veto the bill.

The Washington Post's Mustafa Salim in Baghdad and Karen DeYoung in Washington contributed to this report.