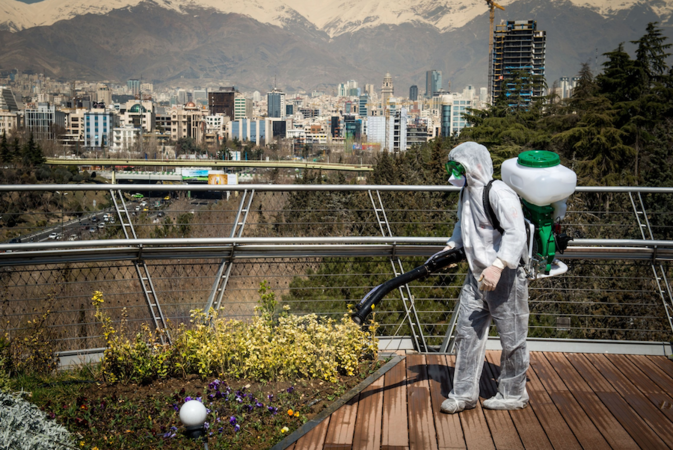 A firefighter in protective clothing sprays disinfectant on a pedestrian overpass in Tehran on March 9, 2020. MUST CREDIT: Bloomberg photo by Ali Mohammadi.

With the collapse in oil prices and a rampaging coronavirus outbreak, Iran is living through a perfect storm that some in Washington believe the 40-year-old Islamic Republic will be unable to survive.

A change of regime or outlook in Iran has long been a goal of U.S. governments, pursued over decades and without success. But it's easy to see why those driving the current administration's so-called maximum pressure policy might think the moment is approaching.

Weeks later, Iranian forces mistakenly shot down a civilian airliner as they responded to the U.S. killing of the iconic general and architect of Iran's regional foreign policy Qassem Soleimani. Both events damaged the image of the Islamic Revolutionary Guard Corps, a bedrock of support for the clerical leadership.

The domestic political rebuke was swift; much of the nation boycotted parliamentary elections in February, producing a record low turnout. Now, in quick succession, one of the worst coronavirus epidemics after China has forced Iran to seek International Monetary Fund financial help for the first time in 60 years, and the crash in the price of oil has further undermined a traditional pillar of government revenues.

Iran's regime is in a tenuous position, said a person familiar with the Trump administration's thinking on the issue. There's only so much that they can resist, the person said, suggesting a collapse was just a matter of time.

Yet despite evidence of significant pressure on the Iranian state, and its ability to pursue ambitious operations from Syria to Yemen, there's little to suggest that either the Revolutionary Guard or the clerical leadership in Tehran are going anywhere soon.

"They are fractured now, and they're having difficulty dealing with a number of things," including coronavirus, head of U.S. Central Command General Kenneth McKenzie told the Senate Armed Services Committee on Thursday. "I think it probably makes them in terms of decision-making more dangerous rather than less dangerous."

There are few signs of panic among the leadership in Tehran. Interviewed on the margins of OPEC's watershed March 7 meeting in Vienna, Oil Minister Bijan Namdar Zanganeh predicted the effects of the coronavirus would be short lived and discounted any significant impact on the Iranian economy from $30 oil. "Who believed we could resist for two years?" he said, referring to the Trump administration's campaign against Tehran.

On oil at least, analysts agree. Precisely because Iran already absorbed the pain of lost revenues from exports of crude at the hand of U.S. sanctions, it now sells such small volumes that a price reduction can have limited impact.

Iran exported just 34,500 barrels of oil per day by the end of February, down from a daily peak of 2.5 million barrels in April 2018, before the return of U.S. curbs. Moreover, most of the oil Iran can still sell abroad goes to China, with half to two-thirds of the total volume sent as payments in lieu under investment contracts with Chinese companies, according to Homayoun Falakshahi, senior analyst at Kpler SAS, a Paris-based commodities data and intelligence company.

"I think on Iran, funnily enough, the impact is going to be minimal, due to Iran being virtually cut-off from the oil market for almost a year now," Falakshahi said. A lot of the crude they do sell is "basically Chinese money going back to China."

Coronavirus is a bigger challenge. The country has been hard hit, with 10,075 confirmed cases and 429 deaths reported as of March 12. That's considerably less than Italy, a G-7 economy better equipped to cope with an epidemic. According to hospital staff interviewed by Bloomberg and other independent news outlets, however, the Iranian government figures could be significantly understated.Iran also has limited resources to buffer its economy. As Italy unveiled 25 billion euros ($27.9 billion) of fiscal stimulus this week and the U.K. a package worth 30 billion pounds, Iran's central bank said it had gone to the IMF to ask for a $5 billion loan to help it battle the virus.

Other government responses have ranged from modest economic gestures to survival measures.

Iran's leaders appear to believe they can see the epidemic out, backed -- crucially -- by a security force that has proved its willingness to use force to counter any unrest. That's been sufficient to keep even Venezuelan President Nicolas Maduro in power, faced with an economy in far worse shape than Iran's.Still, the virus shutdown at home and the decisions of neighbors to close their borders -- a lifeline for sanctioned Iran to secure hard currency -- will deliver a substantial blow.One dairy producer, who asked not to be named, expressed concern over the potential long-term loss of his market in Iraq, but said there's no crisis yet because frontier shutdowns have been intermittent, allowing losses to be quickly recouped.

That's a view supported by the spokesman for Islamic Republic of Iran Customs Organization, Ruhollah Latifi.

While Iraq has closed its frontier with Iran for a week, Iraqi Kurdistan hasn't, Latifi said in a March 9 interview with Tasnim news agency. Similarly, Turkmenistan is closed to Iranian goods, but Azerbaijan was allowing them in so long as they are transferred to Azeri transport at the border. Pakistan reopened its borders to trucks this week after a brief closure.

"Most of Iran's trade is taking place by sea and right now 13 land border crossings are open," Latifi said. Although close neighbors such as Kuwait and United Arab Emirates were blocking sea cargoes, shipping routes to more distant destinations were unaffected, he said.

With Iran reliant on neighbors for close to 75% of its non-oil trade, that relatively sanguine picture could change quickly if the pandemic forces them to take more decisive defensive action, according to a March 9 research note from Ara Enterprise, a Tehran-based business consultancy. But any real challenge to Iran's political system, the note said, will come only "if the government is seen as incompetent and incapable of preventing a mass scale infection."