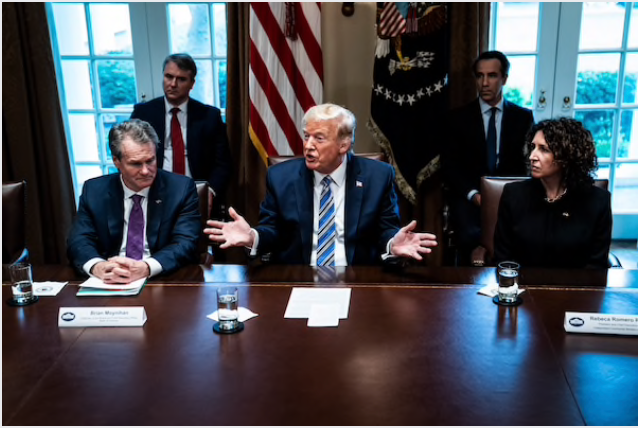 The Trump administration plans to partner with the private sector to set up drive-through testing sites for coronavirus - one of a series of measures underway Friday to boost U.S. testing availability in the face of heated criticism from lawmakers and frustrated Americans unable to find out whether they are infected.

Officials were scheduled to discuss expanding drive-through testing sites, involving private companies as well as state and local health departments, in a meeting at the White House Friday, according to three individuals familiar with the effort.

Representatives from Walgreens, Walmart and CVS, as well as commercial diagnostic labs and manufactures, were slated to attend, according to a senior administration official involved in the response.

The Trump administration announced the measures a day after receiving a harsh drubbing on Capitol Hill. At one House hearing, Antony Fauci, longtime director of the National Institutes of Health's National Institute of Allergy and Infectious Diseases, acknowledged the U.S. testing system is "not really geared to what we need right now . . . That is a failing. Let's admit it."

Democratic and Republican lawmakers have repeatedly pressed administration health officials on why the U.S. has not set up a model similar to that in South Korea - a country with a huge covid-19 outbreak - in which drive-through testing sites do not require a doctor's prescription and results are available rapidly. At one hearing on Thursday, Sen. Ben Sasse, R-Neb., called on officials to "get to the bottom of why those problems are there."

Another senior administration official, speaking on condition of anonymity to talk candidly, said the concern now is less about the supply of tests than whether Americans can find easy and convenient places to get tested. Another concern is setting up testing sites so that they don't expose health workers and others to the virus.

"The problem we're experience is there is a surplus of lab tests available, but those labs and state and public health departments are not setting up effective mechanisms to get people testing," the official said, adding, "there is no reason" states cannot "set up a drive-through . . . a clinic in a parking lot" for patients to be swabbed and specimens shipped off to labs to determine the results.

For that reason, "we are trying to help leverage the private sector," the official said, declining to identify any companies involved in the effort.

The official said that in South Korea, people must first call a phone number and answer a series of screening questions to determining whether they should get tested. If approved, the person drives to a testing site, fills out a questionnaire and, if approved after answering those questions, gets a test.

The administration's push to boost drive-through testing comes as several places around the country have begun offering such services. Mayo Clinic opened such a facility this week, according to Jack O'Horo, a Mayo infections disease specialist. "This helps to protect other patients and staff from potentially coming into contact with the covid-19 virus," he said.

New Rochelle, a New York suburb that has been designated a coronavirus containment zone after an outbreak there, on Friday became the first East Coast site of drive-though testing. Residents can make appointments by phone and then be tested from their cars in a six-lane site set up by the state's health department. Swabs are sent to BioReference Laboratory, which will contact people with their results.

Colorado's health department also has launched a drive-through site in Denver, requiring patients to bring a doctor's note saying they need a test. Such sites also are available in Oahu, Hawaii and Hartford, Connecticut.

In other measures the administration announced early Friday, the Food and Drug Administration has created a 24-hour emergency hotline for laboratories having difficulty getting materials or finding other impediments to running tests, according to announcements early on Friday.

Officials also announced they were giving nearly $1.3 million in federal money to two companies trying to develop rapid covid-19 tests that could determine whether a person is infected within an hour.

In addition, the Department of Health and Human Services assigned Brett Giroir, the assistant secretary for health, to coordinate all covid-19 testing efforts among federal public health agencies, including the FDA, the Centers for Disease Control and Prevention, as well as state and local health departments and public and private clinical laboratories.

The senior administration official said that Health and Human Services Secretary Alex Azar "has been frustrated by the timeliness and accuracy of information regarding testing from the CDC."

After more than a month in which tests themselves were show to become available, the official said that 4.8 million have now been distributed.

The FDA also is giving New York state the ability to authorize certain public and private labs to test for the virus under the aegis of the state health department, without first getting federal approval.

Earlier this week, New York Gov. Andrew M. Cuomo (D) announced he was moving ahead to contract with 28 private labs in New York. "We're not in a position where we can rely on the CDC or the FDA to manage this testing protocol," the governor said.

Cuomo said that he told the private labs they should "get up, get running and start moving forward with testing." The state's health department has a preexisting relationship with these labs, which Cuomo says has the experience with virology to get the testing done.

In addition, the FDA authorized a covid-19 test developed by the manufacturer Roche, making it the third diagnostic test approved for use in the outbreak.

Another senior administration official said they were starting to collect data from private laboratories on the number of tests they performed daily. The administration has been repeatedly criticized for knowing the volume of tests performed by the CDC but not a nationwide total from all the state and local and hospital labs involved in coronavirus testing.