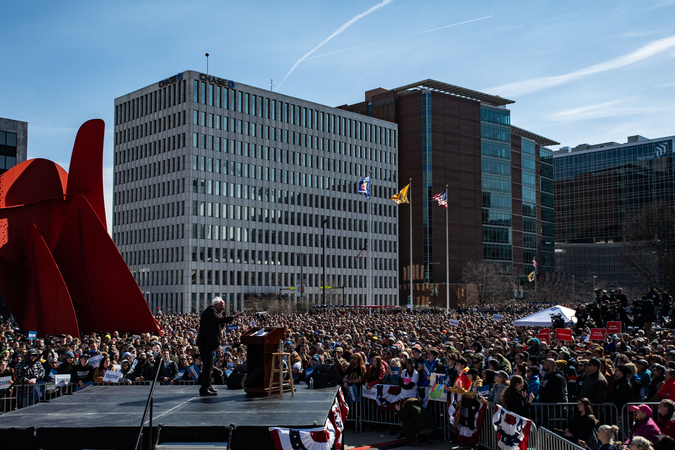 The rapid spread of the novel coronavirus across the United States put the outbreak on a collision course with the presidential primaries, threatening to disrupt the process at a pivotal moment for Democrats as they select their nominee.

Louisiana announced Friday that it would delay its White House primaries from April 4 to June 20, becoming the first state to reschedule because of covid-19. Shortly after, the four states set to vote Tuesday said jointly that their contests would proceed as planned, referring to guidance from public health officials who have declared voting safe if best practices are followed.

But a rush of developments heightened pressure on elections officials already struggling to minimize risks to voters and injected a sense of deep uncertainty about how the 2020 race will unfold amid the growing pandemic.

As the president declared a national state of emergency Friday, colleges shuttered and cities across the country banned large gatherings, there was building worry about the outbreak's impact on the voting process. The United States currently has 2,151 coronavirus cases, with 48 deaths.

Fear about exposure was expected to lower in-person turnout for Tuesday's contests in Arizona, Florida, Illinois and Ohio, when 577 delegates are up for grabs - a potential risk for Biden as he seeks to lock up the Democratic nomination. The former vice president has had strong support from older voters, who are more at risk to suffer serious health issues if they contract covid-19.

"We've just never had a situation like this before," said Michael McDonald, a political scientist at the University of Florida, who said Biden could suffer if seniors stay home, while Sanders could see his support diminish if students being sent home from college campuses are unable to participate.

The joint statement from the chief elections officials in the four states voting Tuesday came amid worries that fears about the coronavirus would keep people from showing up at the polls.

The statement noted that voting involves "people from a nearby community coming into and out of the building for a short duration," as opposed to the kinds of large gatherings that are now banned in many jurisdictions.

"This is about pushing calm, accurate, decisive information out there where there is too much nonsense churning on social media causing people anxiety," he added.

Still, in local jurisdictions, election officials struggled to keep up with an onslaught of calls from concerned residents and the practical demands of obtaining guidance from election, public health and other leaders at every level of government.

"It is a difficult situation for everyone," said Adam Johnson, chief deputy clerk in DuPage County, Illinois. "We are actively reaching out and trying to get the information as quickly as people have it, but we understand that everyone is responding in real time to this situation."

Under guidance from state and local health departments, election officials around the country took action this week to increase their personnel and lower health risks, often by moving hundreds of polling places out of nursing homes and stockpiling supplies to disinfect voting equipment.

In DuPage County, officials announced Friday that volunteers would be paid $200 rather than $130 for Election Day and $15 per hour instead of $10 per hour during early voting.

In Ohio, amid a statewide campaign to recruit poll workers, the state auditor offered employees a paid day off if they sign up.

And in Maricopa County, Arizona, officials took the unusual step of proactively mailing ballots to eligible voters who were not on the permanent early-voting list, a decision that echoed recommendations from vote-by-mail advocates.

But the move was blocked on Friday by a superior court judge, who ordered Maricopa County Recorder Adrian Fontes not to mail out the ballots after the state's attorney general, Republican Mark Brnovich, filed an emergency motion to block the action.

In the filing, the attorney general argued that the county official lacked authority to mail ballots to voters who had not requested them, and that the move risked "creating a swarm of illegal ballots and immense voter confusion."

Fontes said he was trying to help people fearful for their safety to participate in the primary." The ballots were at the door of the warehouse," he said in an interview Friday evening. "My job is to help voters vote. Especially in a time of a global pandemic, it's unfortunate that politics intervened."

Taking a different approach, Louisiana announced that the best way to protect public health - including the health of its elderly poll workers - was to use a special emergency provision in state law to delay its primaries until the summer.

Secretary of State Kyle Ardoin said elections were delayed in 2005 and 2008 after hurricanes. He said his thought of postponing the primaries had unanimous support in across leaders in state government, both Democrats and Republicans.

"We spent most of yesterday working as a team, looking for ways to try to carry out the election. We kept running into barrier after barrier. . . . When I contacted the governor's office, I think that there was some relief in us coming to that decision," Ardoin said at a news conference Friday.

In addition to Louisiana's decision, the Wyoming Democratic Party announced this week that it would do away with the in-person portion of its caucuses, scheduled for April 4, and instead encourage voters to participate by mail, dropping off ballots on March 28 and April 4.

The Nevada Democratic Party also canceled its county conventions - precursors to the national convention in July - and the state party in Iowa postponed similar gatherings.

The prospect of a delayed nomination process drew concern from the Democratic campaigns.

"Our elections can be conducted safely in consultation with public health officials," deputy Biden campaign manager and communications director Kate Bedingfield said in a written statement. She encouraged people who feel healthy, are not exhibiting symptoms and don't believe they've been exposed to the virus to vote Tuesday.

"If voters are members of an at-risk population, exhibiting symptoms, or have been exposed to a diagnosed case of COVID-19, we encourage them to explore absentee ballots and vote by mail options," Bedingfield said.

Sanders said that "rescheduling elections is not something we do lightly or should do lightly." He said his campaign's decision to cancel in-person events is "hurting us."

"This is an issue where the doctors and public health officials are going to have to be weighing the risks," Sanders said Friday during a media briefing in Burlington.

Experts said there was no risk of the general election being postponed. Under federal law, it must take place on the Tuesday following the first Monday in November. The Constitution also mandates that the new Congress be seated on Jan. 3 and presidential terms begin on Jan. 20.

Marc Elias, a leading Democratic attorney who specializes in voting rights, said he knew of no special powers that would allow Trump to change the date of a general election, even in case of a national emergency.

"The answer is no," Elias said. "When it comes to federal elections, there's no wiggle room there."

In states with upcoming primaries, local election officials are now racing to figure out how to mitigate potential health risks of casting a ballot.

In New York, a critical state where voters will weigh in on the presidential nominating contest on April 28, state elections board Co-chairman Douglas A. Kellner said board officials have been coordinating with Gov. Andrew M. Cuomo's (D) office, as well as with legislative leaders, to discuss alternative voting options.

A move to delay April's presidential primary is "possible given the circumstances," he said. In the meantime, Kellner said, some local counties were making changes to their absentee voting procedures that exceeded their authority.

"At this time, public health officials are not advising us that's necessary or appropriate," he added. "One has to balance the risk against the priority of a stable democracy.

"Two counties have gone rogue and taken it upon themselves to take emergency actions that aren't authorized by law," he said.

Erie County had altered the application form to include the novel coronavirus as an excuse for requesting an absentee ballot, he said. And Dutchess County had signaled plans to mail absentee ballot applications to all eligible voters, according to Kellner, and to vastly reduce the number of polling sites.

Erik Haight, an election commissioner in Dutchess County, said local officials were determined to protect the elderly population and that it is customary to consolidate polling locations.

Jeremy Zellner, an elections commissioner in Erie County, said it was the commissioners' job "to make sure people are not disenfranchised, and we believe very strongly we do have the authority to do this based on the governor's emergency declaration and the illness provision in state election law."

In Georgia, which votes March 24, local Democratic leaders were encouraging people with health risks to request absentee ballots ahead of the March 20 deadline.

"It's a question we're all wrestling with, but until there's official guidance from the state, my reaction today is to encourage people to vote absentee," said Wendy Davis, a city commissioner in Rome, Ga., and a member of the Democratic National Committee.

Frustrations were similar in Florida, where state Democratic Party Executive Director Juan Peñalosa said he was struggling to obtain a list of polling sites at senior centers that have been shut down. A request for comment from the Florida secretary of state's office was not immediately returned.

Paul Lux, supervisor of elections in the Florida Panhandle's Okaloosa County, said screens, styluses and surfaces will be disinfected throughout the day. Hand sanitizer will be available in most locations - but not necessarily all, he said.

"I have the same supply problem as everyone else," Lux said. "Hand sanitizer is not something I had on the shelf in our warehouse."

In Wisconsin, where the presidential primaries are scheduled for April 7, election officials were racing to provide voters with absentee ballots while waiting to see if the governor and the state legislature would take more drastic action.

Reid Magney, a spokesman for the Wisconsin Elections Commission, said state officials have been attending webinars and conference calls with the Department of Homeland Security and the Centers for Disease Control and Prevention while also working with the state's Department of Health Services.

The commission this week suspended plans to dispatch special voting deputies to deliver absentee ballots to nursing homes. They will be placed in the mail instead.