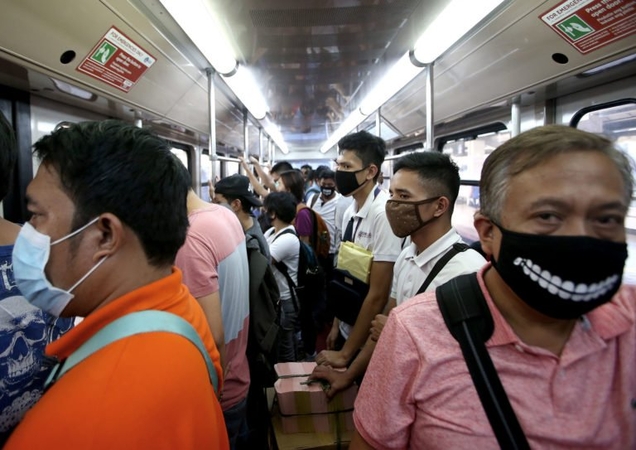 SPACING IS EVERYTHING “Social distancing” seems easier said than done on this LRT1 train on Thursday, but at least the passengers made sure they have a first line of defense in the form of face masks, including the “grinning” variety. —RICHARD A. REYES

Workers living outside Metro Manila will still be allowed to enter the National Capital Region (NCR) during the 30-day “community quarantine” period provided they are properly identified as employed by private and government offices here, officials said on Friday.

Cabinet Secretary Karlo Nograles said at a press briefing at Malacañang that the community quarantine imposed by President Rodrigo Duterte to contain the new coronavirus disease (COVID-19) would allow certain exemptions in consideration of economic activities, including transporting cargo, food and other supplies.

The government opted not to implement a total lockdown as had been imposed on the city of Wuhan, the capital of China’s Hubei province, the epicenter of the outbreak of the SARS-CoV-2 virus, Trade Secretary Ramon Lopez said.

The Department of Health (DOH) has reported on Friday 64 confirmed COVID-19 cases, at least 42 from Metro Manila, including the five who have died.

Following directives from the President, officials on Friday scrambled to craft coherent travel guidelines before placing Manila under community quarantine by Sunday.

On Thursday night, Mr. Duterte placed NCR under Code Red Sublevel 2, and banned all land, domestic sea and domestic air travel to and from Metro Manila from March 15 to April 14.

The quarantine announcement rattled those who lived outside Metro Manila but work here.

Metro Manila’s daytime population swells from 12.5 million to nearly 16 million because of the Greater Mega Manila Area (GMMA) residents (from Cavite, Laguna, Batangas, Rizal, Tarlac, among others) who are employed in the capital.

Public and private vehicles would be stopped at police and military checkpoints for inspection but the Inter-Agency Task Force for the Emerging Infectious Diseases (IATF-IED) has not yet come up with a full list of exemptions, officials said.

Lopez said under the limited lockdown guidelines, workers in Metro Manila who live outside the capital must present documents showing their workplaces were in the NCR at police or military checkpoints at the borders between the metropolis and nearby provinces.

Their identification cards will be scrutinized and they will be checked to determine if they had any COVID-19 symptoms.

Lopez said companies would be required to issue IDs to their employees, especially those living outside Metro Manila, or show “proof of employment.”

Nograles said private companies and government agencies must issue certifications to their employees living outside of Metro Manila.

Lopez said the authorities may conduct random inspections of truck drivers and helpers, and other vehicles delivering goods for Metro Manila.

Other exemptions to the rule are patients with certain medical conditions who need to be treated in Metro Manila, and government officials who need to travel outside the capital, he said.

Private motorists also will be covered by the travel prohibition and must show proof to law enforcers that they were exempted, he said.

Traveling within Metro Manila is allowed but this may change if local governments impose their own local community quarantines.

“Our request to the LGUs (local government units), the NCR mayors, if they impose quarantines in their LGUs, that they coordinate with the Inter-Agency Task Force,” Nograles said.

He said the IATF-IED was still threshing out the specific details and guidelines for the implementation of the community quarantine in Metro Manila, and the particular cases that may be exempted.

Officials said the travel prohibition would not cover international flights to Manila. However, those flying into the capital would not be able to travel out of the metropolis until April 14.

Nograles suggested that if the ultimate destination was in the provinces, it would be better and more convenient for travelers to fly into Clark in Pampanga or Mactan in Cebu or other airports not covered by any quarantine restrictions.

Filipinos, including their foreign spouse and children, Philippine permanent visa holders, and holders of diplomatic visas may be allowed entry into Metro Manila, but will have to observe quarantine procedures.

Foreigners coming from countries with local COVID-19 transmissions will be covered by existing restrictions, particularly those flying from China, Hong Kong, Macau and parts of South Korea—countries covered by a travel ban, Nograles said.

Violators of the community quarantine guidelines and those resisting to be placed under quarantine may face arrest, according to Metro Manila’s police chief.

“What shall we do? Conduct a dialogue? If the guidelines were already passed that we disseminated, those who will violate will be arrested. We will file charges,” National Capital Region Police Office (NCRPO) chief Maj. Gen. Debold Sinas told reporters on Friday.

“The purpose of this quarantine is for us to stay at home … If you do not have an important thing to do, stay at home,” he said.

Sinas said the Philippine National Police may also support mayors who will initiate and propose to have their own blocking, city-wide quarantine or border control.

A still undisclosed number of NCRPO’s 26,000 police personnel will be deployed to man checkpoints around Metro Manila.

The NCRPO, Sinas said, was tasked to recommend the entrance and exit areas in Regions 3 and 4 to the chief of the Philippine National Police.

The police will respect the exemptions to the lockdown approved by officials, Sinas said.

“Our plan is absolute blocking, but if they (officials) say we’re only assigned to conduct checkpoints, then, we’ll do checkpoint,” Sinas said.

The police manning checkpoints will wear protective masks and gloves and maintain a 1-meter distance from the vehicle or persons during inspection, he said.

Sinas said those determined to have fever at the checkpoints would be told to turn back and see a doctor.

He said, “Yes,” when asked if he expected a mass exodus out of Metro Manila especially on Saturday.