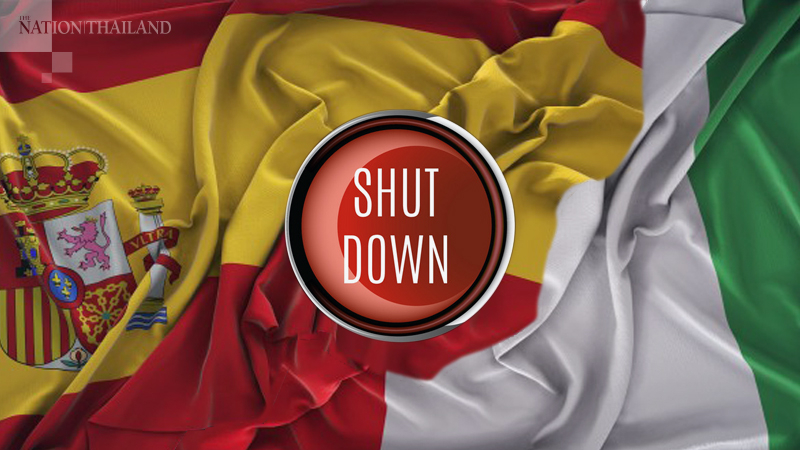 MADRID - Spain on Saturday became the second European country to impose a nationwide lockdown, ordering its 47 million people to mostly stay in their homes as coronavirus cases surge.

The decision by Spanish Prime Minister Pedro Sánchez came less than a week after Italy's government effectively shut down that country amid an escalating outbreak.

In Spain, residents will be able to leave only for essential reasons including to go to work or medical appointments or to buy food, Sánchez told the nation in a televised address.

The restrictions took effect immediately and will remain in place for a 15-day state-of-emergency period but could be extended, he said. Closures of bars, restaurants and hotels - already in place in certain regions - were extended to the entire country, while gatherings and religious services were halted. Schools and universities also were closed.

The nationwide measures follow similar moves by Italy as the coronavirus brings about a level of disruption to daily life on the continent unprecedented since the end of World War II. The World Health Organization on Friday declared Europe the "epicenter" of the global pandemic, with more cases reported from the continent every day than in China at the height of the epidemic there.

"There is no question that we will win this fight," said Sánchez. "The question is whether we will pay the smallest price for the victory."

Even hours before the announcement Saturday, streets and train stations were eerily empty in Madrid, normally a bustling capital. Supermarkets, however, were packed as people scrambled to stock up. As news of the decision emerged, planes carrying vacationers from Britain turned around midflight, tracking data showed.

Sánchez has warned that the number of infections in Spain could reach 10,000 in the next week. Epidemiologists, some of whom have warned that multiple countries in Europe and the United States could also face similar surges in coming weeks, say Spain's rate of growth is particularly concerning.

The Spanish government has faced criticism over claims it acted too slowly to combat the virus as it took hold in southern Europe, particularly for the decision go ahead with a march last Sunday in Madrid to mark International Women's Day, estimated to have drawn 120,000 people.

Minister of Equality Irene Montero, who was particularly vocal about going ahead with the event, has since tested positive for the coronavirus.

Opposition leader Pablo Casado described Sánchez's decision not to cancel the march as "irresponsible." Health workers say the demonstration likely contributed to the spread, with numbers in the city surging a week later, coinciding with the incubation period for the virus.

Even before the lockdown was imposed, authorities urged people to stay home and instituted stricter measures to deter gatherings, with Madrid parks closing Saturday afternoon as crowds were out strolling to enjoy the springtime weather.

The president of Spain's northeastern region of Catalonia ordered quarantine-style measures for the entire region and asked Spain's central government for help to enforce the blockade of ports of entry such as train stations and airports.

But the emergency measures announced by Sánchez included bringing health and transportation services as well as security under centralized control, a potentially fractious move that received immediate pushback from the semiautonomous Catalonia, home to a deep-rooted separatist movement. In a tweet, Quim Torra, the regional president, said it was unacceptable that the government "confiscates" regional powers.

In his speech, Sanchez called for unity. "It's important we don't mistake the enemy," he said. "It's the virus and we should all combat it together."

Seville canceled its historic Holy Week parade, which has run uninterrupted since 1933. The beach towns along the Mediterranean coast ordered thousands into voluntary quarantine after a mass exodus from Madrid earlier in the week caused by a declaration to close schools and force telecommuting.

The country's medical system is already stretched to the limits, with 293 people requiring intensive-care treatment.

A surgical nurse at Madrid's Gregorio Marañón public hospital, who spoke on the condition of anonymity because she did not have permission to speak to media, said her hospital was treating 130 coronavirus patients, 10 of whom were in intensive care. She said there were currently sufficient ventilators but was concerned that could change.

However, she called the emergency room a "different story." She said there was a lack of protective suits, which meant staff could not change between patients. That raises the risk of medical workers spreading the disease as health officials said was the case in the early stages of Italy's outbreak.