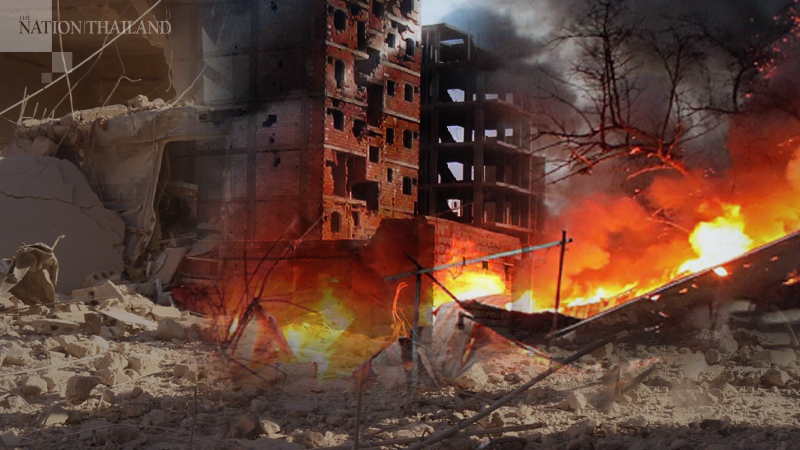 Rockets hit a base housing U.S. troops in Iraq on Saturday, wounding at least three American and two Iraqi troops in an attack that is likely to intensify tensions between the United States and Iran.

Col. Myles Caggins, a U.S. military spokesman, said at least 25 107 mm rockets hit Camp Taji, a base north of Baghdad, on Saturday morning. Two of the Americans were seriously injured, the military said, adding that Iraqi security forces had made an arrest.

The Iraqi military said in a statement that the "blatant attack" had struck Iraqi air defense units and warned the perpetrators and those who may have enabled them. It said seven rocket launchers had been found in a garage near the base, along with two dozen rockets that had not been fired.

"Those who conducted this attack must declare themselves to be dealt with by the law," the statement said. The government's Joint Operations Command "considers any party that mobilizes and legitimizes these actions as a potential partner," it added.

The attack followed a rocket barrage on Taji on Wednesday that killed two American troops and a British service member. In response, the U.S. military launched strikes Friday on targets associated with Kataib Hezbollah, the Iranian-linked militia that Washington blamed for those deaths.

The U.S. retaliation prompted protest from the Iraqi government, which called it a "violation of national sovereignty." Iraqi officials said the attack killed five members of local security forces.

The government on Saturday repeated its appeal against unilateral U.S. military action targeting actors in Iraq.

"We also refuse that the American forces or others take any action without the approval of the Iraqi government and the commander in chief of the armed forces, as they did on the morning of 3/13/2020," it said. "In doing so, it does not limit these actions, but rather nurtures them, weakens the Iraqi state's ability to provide its own security, and expects more losses for Iraqis. This necessitates the speedy implementation of the parliament's decision on the issue of the coalition's withdrawal."

Iraqi politicians have made public calls for the departure of foreign forces following the Trump administration's decision in January to launch a strike outside the Baghdad airport that killed Maj. Gen. Qasem Soleimani, a senior Iranian military figure known for his ties to militia groups across the Middle East, and a senior Iraqi militia leader.

Those killings, and a ballistic missile attack that Iran launched on U.S. forces in Iraq in response, marked a peak in already heightened tensions between Washington and Tehran. The Trump administration has identified Iran as the primary U.S. adversary in the Middle East, imposing sanctions on the country's economy and taking steps to highlight its support of armed proxies in the region.

In the past year, the Pentagon has placed new military assets in the Middle East in response to a perceived increase in the threat from Iran.

A European official in Baghdad said additional rocket attacks on coalition bases in Iraq were expected in the wake of the American strikes on Friday. The official, like others, spoke on the condition of anonymity because that person was not authorized to address the issue publicly.

Abu Ali al-Askari, a de facto spokesman for Kataib Hezbollah, has warned Iraqi security forces to distance themselves from coalition troops and facilities by Sunday, suggesting the group's intent to conduct further attacks.

Iraq's Shiite militias, which have varying levels of links to Iran, have taken on an expanded role in the country's security and politics since they began assisting the government response to an onslaught of Islamic State militants in 2014. The U.S. government blames the militias for killing at least 500 Americans in the war that followed the 2003 invasion.

About 5,000 U.S. forces are in Iraq, assisting the country in hunting down remnants of the Islamic State. Despite the calls for the departure of American forces in the wake of Soleimani's death, Pentagon leaders have said they hope to find a way for them to stay.

Harakat al-Nujaba, another Iraqi militia, on Friday repeated a demand for the departure of U.S. forces. It said in a statement that the voices of Iraqis acting under the influence of the United States should be "snaffled shut" and called for "obligatory resistance for all the mujahideen whom America has experienced before, and will do so again in a way that will make it hard to forget so quickly."

An Iraqi official said "the only solution for the U.S. is to implement the parliament decision and leave" because militias were likely to attack again, triggering additional American responses.

"If the U.S. leaves, then Iraq will be able to deal with these groups, but with this situation, it's chaos and undermines the state," the official said.