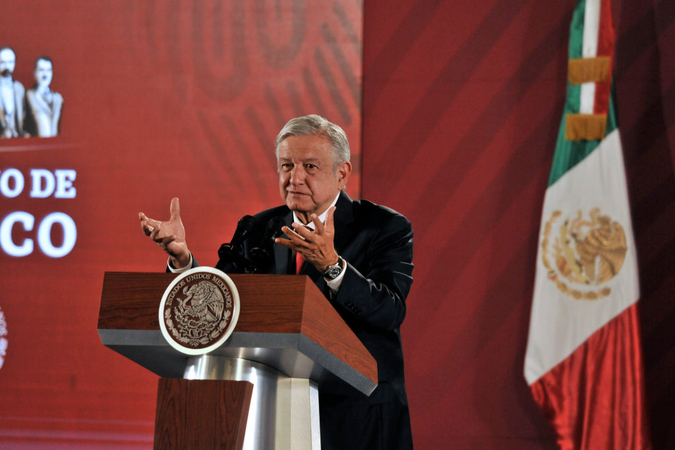 After taking heat over the weekend for continuing with his routine trips to greet supporters outside of the capital despite the coronavirus pandemic, Mexican President Andres Manuel Lopez Obrador said he has no plans to alter his schedule for now.

If health officials recommend that he take a test for the virus, or that he suspend his encounters with the Mexican people, he'll follow their orders, he said, adding there's no need for him to go around with a face mask.

"It's being realistic and not exaggerating," AMLO, as the leader is known, said during his daily press conference. "If the doctor tells me, I'll obey. If I take a test, it would prompt everyone to run to do the same and over run the laboratories. What do we gain from that?"

While Mexico does plan to suspend classes in the coming week, the government has not moved to shut down its ports of entry or to restrict visitors from certain countries. A large music festival was held over the weekend in Mexico City and soccer games were played with fans despite the number of confirmed cases climbing to 53.

The president shared videos of events over the weekend where he was hugging, shaking hands and kissing supporters. Health experts globally have recommended washing hands and so-called "social distancing", or not getting too close to other people, as effective methods of curbing the spread of the virus.

Some of Mexico's neighbors, such as El Salvador and Guatemala, have imposed draconian controls to try to limit contagion.

AMLO said social programs will not be affected by the global selloff and an eventual impact on the economy, and it will be the government which further tightens its belt to avoid inflicting hardship on the poor. The drop in the Mexican peso may cause the ratio of debt to gross domestic product to rise, he said.

AMLO repeatedly turned the microphone over to Hugo Lopez-Gatell, the undersecretary of health who has been the main spokesman on the pandemic in Mexico. Gatell downplayed the need to shut down the country and economy and said the government is working to mitigate the effects.

While looking at a global map of the pandemic, AMLO said Mexico, currently a grey color, could turn red like the U.S. and European countries, but that there's no reason to overreact. Mexico currently has 53 cases of the illness, according to Johns Hopkins University.

"It could happen. But we're getting prepared and won't become alarmist prematurely," he said.

Last Friday, Lopez Obrador warmly greeted bankers, who held their annual conference in the beach resort of Acapulco even as major events around the world had been shuttered.