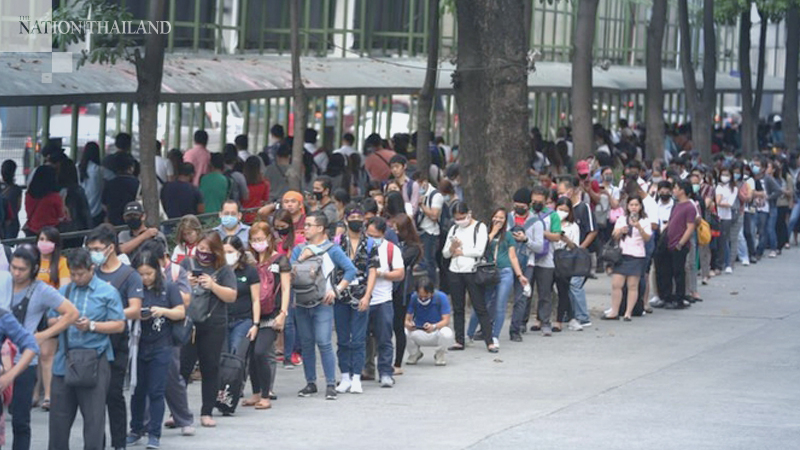 ‘SOCIAL DISTANCING’ Hundreds of commuters throw caution to the wind as they queue cheek by jowl outside the MRT3 North Avenue station in Quezon City. —NIÑO JESUS ORBETA

By Leila B. Salaverria
Inquirer.net/ANN

MANILA, Philippines — In a sudden escalation of moves to prevent the spread of the new coronavirus, President Rodrigo Duterte placed the whole of Luzon under “enhanced community quarantine” on Monday, just a day after the general community quarantine in Me­tro Manila took effect.

The order for the Luzonwide quarantine came as coronavirus cases dwindled to just two on Monday, but thousands crowded the border between Metro Manila and nearby provinces to travel to their jobs in the National Capital Region.

Duterte reached the decision during a meeting with concerned officials in Malacañang on Monday.

‘Fight for the lives’

Explaining his decision in a televised message to the public, Duterte said there was a need to be very careful now given recent developments, and described this as “fight for the lives.”

“Upon further study of worldwide trends and measures and the need for extreme caution during times such as these, I have come to the conclusion that stricter measures are necessary,” he said.

He said he decided to expand the quarantine to the rest of Luzon because there were reports that other areas on the island had coronavirus cases.

The government does not have the luxury of time and wait to verify if there is a contagion in other places, he said.

“I cannot go into a guessing game,” he said.

The President stressed that this was not martial law, and called on the people not to be afraid of the police and the military. But they should obey the authorities during the quarantine, he added.

Duterte called on business owners to help their employees by giving them their 13th month pay in advance or paying them half of their salary if there is no work.

They could do this as “a way of showing solidarity with the Filipino people at this critical time,” he said.

Duterte also called on big companies and the “rich” such as businessmen Manny Pangilinan and the Ayalas to understand the plight of their workers.

“You might be able to really alleviate the situation by just understanding also the plight of the workers who are not working now and lawfully not really in a position to demand,” he said.

Duterte also asked the communist New People’s Army for a ceasefire during the emergency.

“Kindly give me that if you want that we will be at all times on talking terms in this time of crisis,” he said.

Duterte asked the insurgents to cooperate and help, adding that he would repay them in the coming days.

Under the memorandum that the Palace released last week, an enhanced community quarantine means strict home quarantine would be implemented in all households.

Transportation would also be suspended and provision for food and essential health services would be regulated.

There would also be a heightened presence of uniformed personnel to enforce the qua­rantine.

The measures are stricter than those for a general community quarantine, where the movement of people would be limited to accessing basic necessities and work.

Duterte said the mayors and barangay captains had the responsibility to implement the quarantine measures and take care of their communities, including providing resi­dents with food.

In a television interview, presidential spokesperson Salvador Panelo said the enhanced community quarantine was effective immediately. He did not say up to when, but the original quarantine order is up to April 12 unless there is a reason to lift it earlier.

Their management should ensure the adoption of a strict skeleton force to support opera­tions, and observe strict social distancing measures.

Business process outsourcing establishments and export-oriented industries would also remain operational, subject to the condition that strict social distancing measures are observed and their personnel are provided appropriate temporary accommodation arrangement by March 18. A skele­ton workforce would be implemented.

Transit to and from the listed establishments anywhere within the quarantine area would be allowed.

Media personnel would be allowed to travel within the quarantine area provided that within 72 hours from the issuance of the memorandum, they would secure an identification card from the Presidential Communications Operations Office.

The memorandum also said outbound passengers intending to depart the Philippines from any of the international airports in Luzon would be allowed to travel for a period of 72 hours from the effectivity of the quarantine.

Inbound international passengers, in transit upon effectivity of the quarantine, would be allowed entry subject to applicable quarantine procedures if coming from countries with existing travel restrictions imposed by the government.

All inbound Filipino citizens, including their foreign spouse and children, if any, holders of permanent visas, and holders of diplomatic visas issued by the Philippine government would be allowed entry, subject to applicable quarantine procedures if coming from countries with existing travel restrictions.