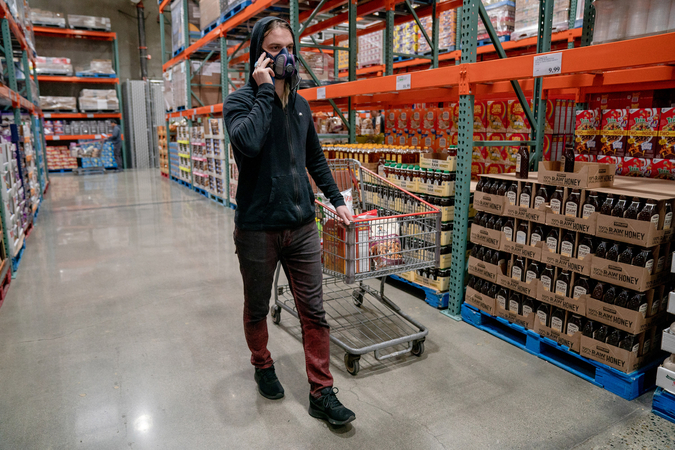 Mark Estee spent his Tuesday laying off 100 cooks, waiters and dishwashers, having been forced by city decree in Reno, Nevada, to close two restaurants that had been thriving just days ago.

Less than an hour down the road, in Nevada's Carson Valley, the threat of coronavirus had inspired no such restrictions. Estee's three other restaurants were preparing to serve dinner, a hearty mix of pasta, burgers and beer.

Such is the state of America's patchwork response to the pandemic sweeping the globe. In some places, governors, mayors and county leaders have instituted aggressive action that is changing the fabric of life: shelter-in-place orders, business bans and school closures. In other spots, authorities have been far more lax, allowing routines to carry on more or less as normal.

The divide in responses showed some signs of narrowing Tuesday: Nevada's governor announced the shutdown of restaurants, bars and the state's vaunted casinos late Tuesday evening. The governor of West Virginia did the same, and he appeared chastened as he announced that his state had become the 50th to record a coronavirus case.

In states that had already taken tough measures, the response only escalated: North Carolina's Outer Banks announced it was setting up checkpoints to keep nonresidents out of the popular barrier islands. New York's mayor said he was considering ordering the city's nearly 9 million people to stay at home, as San Francisco did a day earlier.

But in other states, another day passed without the sort of robust action that public health officials say is needed to stem the virus' spread.

The disparities across the country set the U.S. response apart from that of nations that have moved in a unified way to try to tamp down outbreaks. The gaps are increasingly drawing the ire of state and local officials who have acted decisively to halt the spread, but worry their efforts will be for naught if their neighbors don't follow suit - and if Washington doesn't act more proactively to set the tone.

"I'm disappointed," said Reno Mayor Hillary Schieve, who decided to shut down her city's restaurants after hearing horror stories about the virus's impact from the mayors of Seattle and New York. Her neighboring jurisdictions have not done the same. "We can do this, but we all have to be working together," she said.

Some have appealed directly to the White House to take command.

In private conversations with the Trump administration, New York Gov. Andrew Cuomo, a Democrat, and his deputies have emphasized the need for a strong, coordinated federal response like those in China, South Korea and Italy.

"This can't be a national policy of every state does its own thing," he said at a news conference over the weekend. "You can't have a patchwork quilt of policies."

If New York closes stores and New Jersey doesn't, Cuomo said, his decree has done little to slow down the virus - but instead "just sent thousands of vehicles over to New Jersey, flooding stores."

As of Tuesday, 38 states had completely shut down their public schools for the near future; Kansas Gov. Laura Kelly, a Democrat, announced Tuesday that the state's schools would close for the rest of the academic year. In the other 12 states, some individual districts had decided to close. There was no state in which all schools were open, according to tracking by Education Week.

In Oklahoma - where Gov. Kevin Stitt faced ridicule and criticism after tweeting a photo of himself and his family at a packed restaurant Saturday - officials declared a state of emergency Sunday and on Monday ordered all schools closed.

The state has not taken the more drastic measure of closing restaurants and bars, despite the urging of the Oklahoma State Medical Association. But Norman and several other cities have.

Jeffrey Klausner, an infectious disease specialist at the University of California at Los Angeles School of Public Health, said the United States is so vast and so diverse that there is an argument to be made for more targeted and local approaches.

"One of my concerns is we're taking a sledgehammer approach, and that's an overreaction in some areas," he said.

Klausner, a former Centers for Disease Control and Prevention epidemiologist, explained that different ages, professions or subgroups - such as smokers - might be affected in different parts of the country. Broad measures, such as closing down parts of the economy, might do little to help them.

Ohio, led by a Republican governor, has been perhaps the most forward-leaning state in enacting restrictions. But many other GOP-led states lag behind as polls show a significant share of Republican voters doubting the severity of the coronavirus outbreak. Some leaders say they are taking their cues from President Trump, who has at times downplayed the risk posed by the virus.

In West Virginia, Justice said Monday night that he thought it was premature to order bars and restaurant to shut down. The Republican repeatedly noted that the federal government had not ordered states to act.

"We've got to keep on some way living, and doing what we are doing," he said.

His tone was markedly different late Tuesday, after the state's first diagnosis.

"If by chance I left a stone unturned and at the end of the day, in trying to do something to cure an inconvenience, or cure an economic issue, I exposed others to a situation where you lost a loved one, how do we overcome that? How do you replace that? It just can't be done," he said.

In some Republican-run states, governors have resisted restrictive action while allowing mayors to take their own initiative. In Tennessee, Gov. Bill Lee, a Republican, has not ordered restaurants and bars to shut down, but Nashville Mayor John Cooper closed bars in the city and reduced restaurant capacity.

Layla Vartanian, owner of Layla's Honky Tonk on Nashville's iconic Broadway, closed Monday night. The bar had been open under Nashville rules limiting restaurant capacity but closed night after the CDC recommended canceling gatherings of more than 10 people. Vartanian said all bars on Broadway are closed, with just a smattering of restaurants offering carryout.

The mixed signals from leaders, she said, has been frustrating.

"We would like to let the state and the city be on the same page," Vartanian said. "Every day it changes, day by day, so what is it going to be tomorrow? Two people? Why don't we just shut everybody down and carry on with our lives a few weeks from now?"

Beyond the city's limits, it's a very different story.

Natasha Hendrix, the owner of McCreary's Irish Pub and Eatery in Franklin, Tenn., said about 40 people were in the bar's dining room for St. Patrick's Day lunch, eating a corned beef and cabbage special and drinking green beer. Hendrix is sure a lot of the clientele came from Nashville.

"The funny thing is most people don't seem to care for some reason. They think the virus is taking a break today," she said.

John Wittman, a spokesman for Texas Gov. Greg Abbott, a Republican, said the state has restricted visitation at hospitals, senior centers, jails and day cares in an effort to protect the most vulnerable. But Texas has otherwise allowed municipalities to decide when and whether to shut things down. Austin, Dallas and Houston have closed most bars, limited restaurants and barred large gatherings.

"The reality is this: the local governments are doing a very good job right now of listening to their local health departments and following their guidance," Wittman said. "What is right in those big metro areas might not be right in Amarillo and Abilene. Texas is just a massive state."

Some officials who had earlier resisted tough action were catching up Tuesday - and suggested even more drastic measures were still to come.

In South Carolina, Gov. Henry McMaster, a Republican, ordered the state's bars and restaurants to close "dine-in service." McMaster also announced he was mobilizing the National Guard so it can support the needs of hospitals.

"The enemy we face, the enemy of this virus, is bigger than any sort of irritation or inconvenience that any of us could have," McMaster said. "We are asking people to stick together, understand that we are in a crisis and we need to take these measures."

Asked whether he was considering even more dramatic steps such as a statewide curfew, McMaster said that "all such measures are options that are on the table."

Even as some restrictions tightened, however, others appeared to be loosening. After international travelers faced long lines and extensive checks while entering U.S. airports over the weekend, attempts to screen passengers at some of the nation's busiest airports, including Chicago's O'Hare and Hartsfield-Jackson in Atlanta, appeared to be relatively minimal Tuesday, with some international passengers breezing through customs without health checks.

As restaurants and bars continue to serve customers in Nevada's Carson Valley, authorities said they would adhere to any state action. But they said they would not contemplate acting on their own until they saw evidence that the virus was being transmitted locally.

In Nevada, Gov. Steve Sisolak said late Tuesday that all state residents should stay home if at all possible and he ordered all gaming operations in the state to cease business at midnight.

"This is affecting the lives of our citizens. People are dying," he said. "It's incumbent upon the people of this state to take this seriously."

Just hours earlier, authorities in Carson Valley had said they had no immediate plans to enact closures on their own, absent evidence that the virus was being transmitted locally.

"If we see community spread, that would be a consideration," said Jessica Rapp, the public information officer for Carson City Health and Human Services. "At this point, it's not."

But Schieve, the mayor of nearby Reno, said she concluded over the weekend that waiting was not an option. Through the U.S. Conference of Mayors, she had heard from the leaders of Seattle and New York about just how damaging the virus could be if left unchecked. She understood the economic damage that a shutdown would cause. But she feared inaction even more.

"It's gut-wrenching," she said. "This is an absolute economic disaster. But if health care fails, then we're in the biggest predicament we could possibly be in."

Estee, the restaurateur, said he was inclined to agree. As painful as it was to shutter his two Reno restaurants, he was prepared to close the three Carson Valley ones as well if it were to help the United States pull out of a crisis. To delay, he said, just postpones the inevitable.