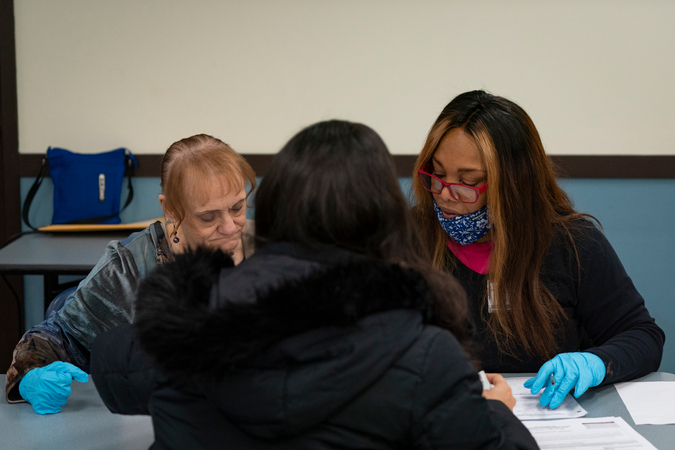 Volunteers Linda Hull, left, and Carolyn Myers give instructions to a voter in Illinois on Tuesday. Despite worries about the novel coronavirus, Illinois, Florida and Arizona still held primaries. MUST CREDIT: Photo by Youngrae Kim for The Washington Post

Former vice president Joe Biden scored a decisive win in Florida on Tuesday, extending his run of victories on a primary election day in which the growing national response to the coronavirus pandemic complicated voting as it threatened to disrupt future contests.

The emphatic win raised further questions about the viability of the campaign of Sen. Bernie Sanders, I-Vt., and set Biden, who already was leading the contest by more than 100 delegates, on a clear course to a first-ballot victory at the Democratic National Convention in July, barring a seismic shift in the race's dynamics. This was the third consecutive week of voting in which he outperformed Sanders, including 16 of the past 21 contests before Tuesday's.

In the general election swing state of Florida, the biggest prize of the night with 219 pledged delegates, Biden was winning more than twice as many voters as Sanders after the vast majority of votes had been counted, amid a moderate increase in turnout compared to 2016, as projected by Edison Media Research. Results were still being tallied early Tuesday night in Illinois, which divvies up 155 delegates, and Arizona, which carried 67 delegates.

Voters braved historic conditions in the three states that cast ballots a day after President Donald Trump requested that Americans stop congregating in groups of more than 10 people to reduce transmission of the novel coronavirus, which has sequestered millions in their homes, closed businesses across the country and hammered the financial markets.

Reports of polling place disruptions - with unopened precincts, a dearth of cleaning supplies and long lines in some places - emerged across the country. Both candidates urged voters to take extra precautions.

The Sanders campaign told supporters that "going to the polls amid the coronavirus outbreak is a personal decision and we respect whichever choice voters make." Biden told voters that they should vote by mail or from curbside if possible.

"If you vote in person, please wash your hands, don't touch your face, and stay 6' from others in line," Biden tweeted.

Sanders made no mention of the elections Tuesday night when he addressed the nation about his proposed responses to the coronavirus pandemic. Shortly before Florida closed the last of its polling places, Sanders offered a long list of responses to the viral outbreak that would cost about $2 trillion, he said, including a monthly $2,000 check for every American household for the duration of the crisis.

Signaling an intent to stay involved in the political conversation, Sanders directed Americans to his campaign website and concluded by saying, "I look forward to continuing to communicate with you to tell you where we are coming from, what our ideas are and look forward to hearing from you."

Sanders was not expected to speak publicly again Tuesday night, according to a campaign official.

Sanders and his wife, Jane, spent the day in Washington, where the Senate is working on relief packages to respond to the virus, according to a campaign official. Biden met with advisers and public health experts at his home in Delaware.

Voting in Ohio, the fourth state that was to cast ballots Tuesday, was delayed at the last minute by Gov. Mike DeWine, a Republican, as a result of the growing viral infection, despite a court ruling that voting should take place.

DeWine said Monday night that he wanted to postpone in-person voting until June 2 and extend absentee balloting into the intervening weeks.

Georgia, Louisiana, Maryland and Kentucky also have rescheduled their contests for later in the year. Under Democratic Party rules, states have until June 9 to complete their delegate selection primaries or caucuses, and party leaders have the authority to seek rule changes to accommodate states that fail to meet the deadlines.

"As our country deals with the uncertainty of covid-19, it is critical that states provide clarity and not confusion, which could lead to disenfranchising voters," Perez said in a statement Tuesday afternoon.

A key question for Tuesday was to what extent voters would stay home to avoid exposure to the virus. So far this year, turnout has increased by about 30 percent over 2016 levels.

Before polls closed, the Biden campaign expressed confidence that the results would all but seal the nomination for their candidate.

"It would take a drastic, historically-incomparable swing for Sen. Sanders to win more delegates than Biden today or to close the delegate differential," wrote Kate Bedingfield, Biden's deputy campaign manager in a memo issued Tuesday afternoon.

Biden's team laid out a case that the primary results would be valid, rebutting questions raised by Sanders's allies that the potential for a depressed turnout because of the virus might cast doubt on the validity of the outcome.

"The American people are resilient and strong," Bedingfield wrote. "We have maintained our democracy through war and peace, economic downturn and prosperity, and in previous moments of public health crisis. We held elections during the Civil War, the 1918 flu pandemic, and World War II."

The Biden and Sanders campaigns have dramatically shifted their strategies as a result of the pandemic, forgoing travel and rallies for the past week in favor of virtual town halls for Biden and a streaming "fireside chat" and a "digital rally" for Sanders, with musical guests Neil Young and the Free Nationals.

The Sanders campaign said Tuesday that its programming had been viewed more than 5 million times. "Our digital organizing infrastructure is unmatched, and in this moment of fear and uncertainty, we are proud to be able to speak directly to Americans," Sanders campaign manager Faiz Shakir said in a statement.

Biden has held two tele-town halls, including one Monday night primarily geared toward voters in the three states holding primaries Tuesday. The campaign also plans to hold virtual high-dollar fundraisers in which Biden will interact online with donors.

Biden's team is increasingly focusing on the assumption he will win the nomination, announcing at a Sunday night debate that he will pick a woman to be his vice president. The campaign plans soon to detail who will be in charge of vetting potential running mates.

In this primary, after a string of devastating losses, Sanders started offering blunt public appraisals of his campaign's efforts, admitting that he has failed to convince Democrats he is more electable than Biden but arguing that he has won the battle of ideas and the support of young people.

In the starkest terms yet, he warned Democrats on Monday night not to overlook the youth vote. "It really does stun me to what degree the Democratic establishment continues to ignore the needs and the ideas of younger people," Sanders said during his digital rally.

But there was little evidence that these strategic recalibrations were solving his problems. Public opinion polls on the eve of Tuesday's primaries showed Biden leading by a wide margin.

Inside the Sanders orbit, there has been private concern this week that Sunday's debate did not do enough to cause a major shift in the race, as some had hoped it would. But even close confidants said they couldn't predict what Sanders ultimately would decide about his candidacy. He and his wife are expected to reach a decision together, people in frequent contact with them said.

Some Sanders allies have privately speculated that the coronavirus crisis might make it more likely for Sanders to stay in the race. As a longtime advocate of creating a Medicare-for-all system in which the government is the sole provider of health insurance, Sanders has said the pandemic shows precisely why universal health care needs to be enacted swiftly.

RoseAnn DeMoro, a close Sanders friend and a former head of an influential nurses union, said Monday that the volatility across the country is justification for the senator from Vermont to stick it out.

"Anything can happen," she said in an interview Monday. DeMoro expressed disdain for Biden and his supporters, accusing some of being "out of touch" and taking "cheap shots."

Larry Cohen, who heads a pro-Sanders nonprofit, sees a different benefit to staying in for the long-haul: A slow and steady accrual of delegates to the national convention. In Cohen's view, this will give the Sanders movement leverage against the Biden forces when it comes to forming key party panels and shaping the party's approach to health care and climate change.

"It's a big difference between one-third of the Florida delegates versus zero," Cohen said.